Some Gazans opt for ISIS over Hamas

Gazan Salafists in both the Strip and Sinai have gone to Syria and Iraq to fight alongside the radical Islamist organization.

As ISIS fights its way through Syria and Iraq, some Gazans appear more interested in joining the radical Islamist organization than in fighting Israel, according to a report by American news company Vocativ. The company, which specializes in collecting information from the web, reported there is an increase in support for Salafists in both the Gaza Strip and in Sinai in recent month, noted both on the ground and on social media.

In June, Salafists held an ISIS support rally in Gaza, a demonstration that was quickly shut down by Hamas' security forces. At the time, Hamas has denied claims ISIS' influence has made its way into the Gaza Strip. 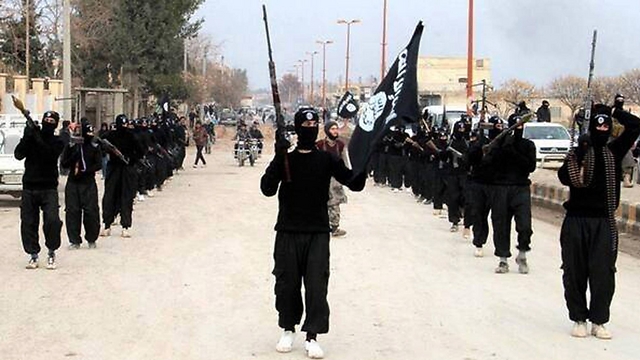 (Photo: AP)
In what is undoubtedly interesting timing, it was reported that ISIS operatives were trying to infiltrate Sinai from the Gaza Strip through the network of smuggling tunnels under the Egyptian border - an attempt thwarted by the Egyptian security forces. The Egyptian army denied the reports at the time, while Hamas surprisingly fell in line with the Egyptian denial, an unusual occurrence since the ouster of Hamas-ally president Mohammad Morsi. Last week, Hamas worked painstakingly hard to shake off the comparison between ISIS' horrific acts of beheadings and executions to their own spree of executions of "collaborators" with Israel.

Expressions of support of ISIS continue unabated in Sinai as well. Radical Salafist organization Ansar Bait al-Maqdis, that is fighting against both Israel and the Egyptian army, released an unusual video from its Eid al-Fitr sermon, given by one of the organization's leaders, Usama Abu al-Masry, to his supports in the middle of the desert, where he expressed the hope Allah would open the road to Baghdad to ISIS. But it appears that the expressions of support and solidarity have already been translated into active participation in fighting on the battle fields of Syria and Iraq. Several Gazans from Rafah, Nuseirat and Jabaliya were killed in Homs and Aleppo in Syria and Samarra in Iraq while fighting in ISIS' ranks. According to recent reports in forums affiliated with ISIS, two Gazans, from Sinai-based Salafist organizations Ansar Beit al-Maqdis and Ansar al-Dawla al-Islamia, have traveled to Iraq as "representatives" of these group to fight alongside ISIS. 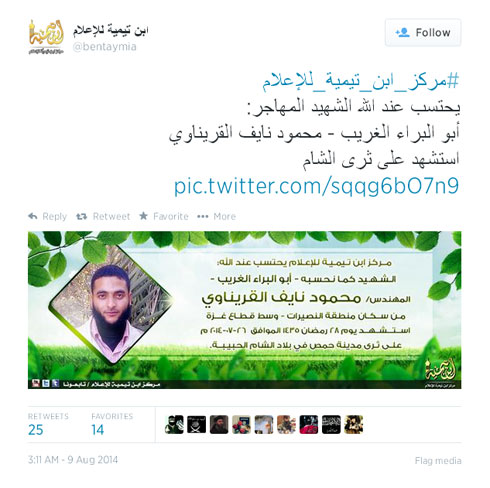 It is important to note that the Islamist organizations in Sinai are closely tied to the armed factions in Gaza. It is also important to note that during Operation Protective Edge, the armed factions in Gaza, led by Hamas and the Islamic Jihad, reportedly tried to encourage the Sinai groups to open another front against Israel.

One of these Gazans is Muhammad Naif al-Qarinawi, an engineer from Nuseirat who fought under the nom de guerre Abi al-Bara al-Ghazi, who was sent to Syria to offer his operational expertise on bombs to ISIS. He was killed on July 26 in a fight against the Syrian army at the Sha’er gas field just outside of Homs. Ali Samir Abu al-Ainin was sent by the Sinai-based Ansar Beit al-Maqdis to fight alongside ISIS in Iraq. He was killed in the city of Samarra in a battle meant to be ISIS' push for Baghdad. 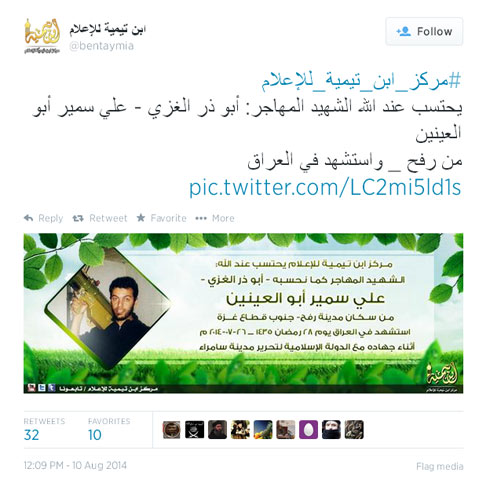 Ali Samir Abu al-Ainin from Ansar Beit al-Maqdis, who was killed in Iraq fighting alongside ISIS (Photo: Twitter)
A video recently posted online could provide additional evidence to the presence of Salafists from the Gaza Strip in the ISIS ranks. Among other things, the Gazan operatives are seen firing at what are allegedly Syrian army posts as part of ISIS' operations. In the videos posted online, these militants are said to be a part of the Sheikh Abu Noor al-Maqdisi Brigade. It is possible ISIS has a unit of militants from the Gaza Strip, similar to the organization's units of other nationalities. Sheikh Abu Noor al-Maqdisi, after whom the unit was called, was a Salafist-Jihadist sheikh who was assassinated by Hamas in 2009, and is considered the religious authority for Salafists in the Gaza Strip. In 2009, al-Maqdisi gave a sermon in a in a Rafah mosque, announcing the formation of an Islamic Emirate in Gaza - which challenged Hamas and angered its leaders. The sheikh was then killed in a gunfight that ensued between Hamas men and armed Salafists. Since then, al-Maqdisi became a martyr in the eyes of Salafists in the Strip. Over the past year, dozens of Gazans have reportedly gone to Syria to fight against President Bashar Assad, some even lost their lives. However, it has been reported that most of them preferred joining the ranks of the Nusra Front, an al-Qaida-linked group in Syria. Following ISIS' success, however, it appears it has now become more attractive to Gazans.