Despite heavy losses and widespread destruction, Palestinians in the Strip fire rifles in air during celebration over long-term ceasefire.

Despite nearly 2,000 lives lost in Gaza and the destruction of thousands of homes, hundreds of Gaza residents took to the streets to celebrate Hamas' "victory" over Israel as a new, long-term ceasefire came into effect Tuesday evening. Hamas supporters fired automatic rifles in the air and made the "V" hand gesture usually associated with peace. Qatari news network Al Jazeera, which promoted Hamas' interests throughout Operation Protective Edge, began a live broadcast of the celebrations in Gaza almost immediately after the ceasefire started. 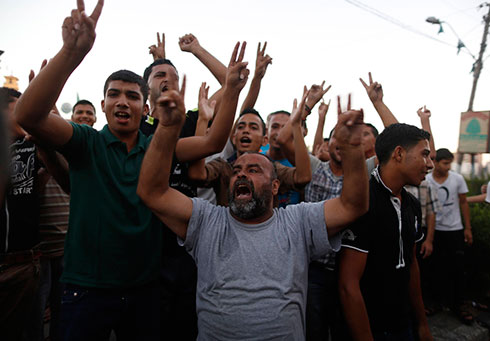 Gazans celebrate announcement of long-term ceasefire (Photo: Reuters)
It is difficult to estimate the turnout for the celebrations based on footage shot by Hamas and Al Jazeera, though the Tuesday evening festivities in Gaza were independently confirmed. During the last temporary truce two weeks ago, Hamas broadcast images of victory parades on all its media outlets – though only few people participated in the celebrations. Despite widespread fear of Hamas retribution, criticism of the terror group has been emanating from Gaza in recent weeks, as local residents decry the organization for dragging them through a month of suffering and death.

"We are here today to declare the victory of the resistance, the victory of Gaza, with the help of God, and the steadfastness of our people and the noble resistance," Hamas spokesman Sami Abu Zuhri said in a news conference at Gaza's Shifa Hospital. 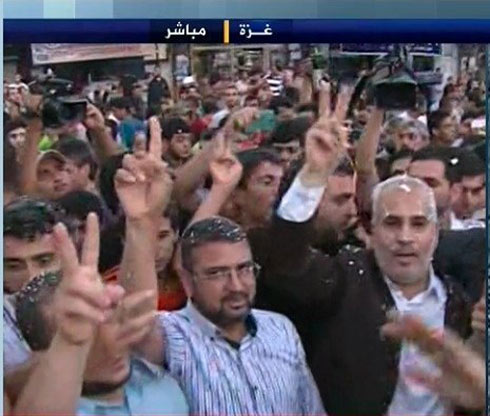 Hamas officials celebrating the ceasefire
"The value of this campaign is not in the opening of this crossing or that crossing, but in paving the way for the next stage - liberating Jerusalem," Zuhri said. Another Hamas official, Izzat al-Risheq said that Israel "could not achieve any military success in 51 days of fighting aside from its war crimes on defenseless citizens, the majority of whom are women, elderly, and children."

Even though Hamas was responsible for the persistent rocket fire on Israel which dragged the IDF into a ground incursion, al-Risheq did not hesitate to blame the "occupation for starting the aggression."

Neemdor Semel contributed to this report.