Zara destoys shirt, appologizes after many express anger on fashion brand's Facebook page; 'I just have a question: Does it come with a temporary tattoo on the wrist? Also, do you have S.S. jackets for kids?'

Zara is offering a t-shirt reminiscent of prisoner uniforms worn by Jews in Nazi concentration camps. The shirt is for toddlers and is labeled as "a striped sheriff t-shirt", and can be bought for NIS 79.90. Zara has in the meantime taken down the item, destroyed the inventory and apologized in a response.

The shirt has navy and white horizontal stripes with a yellow star on the top side shaped and colored like the star used by the Nazi regime to mark Jews during the Holocaust. The main difference is that Zara's yellow star has the word "Sheriff" on it, but its visibility is marred by the yellow background which makes the word rather unclear. 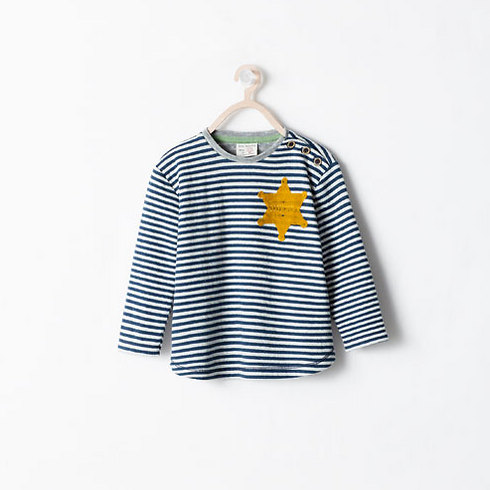 This is Zara's second Holocaust related scandal: In 2007 the company removed from its stores around the world a hand bag that had swastikas embroidered on it. 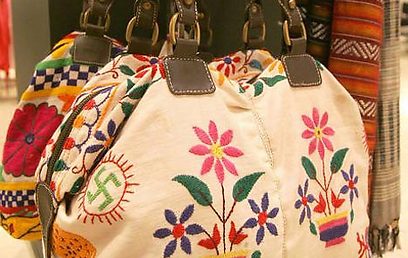 Zara's bag with an embroidered swastika
Zara said in response: "The item is a part of the 'Cowboy Collection' for babies, and was inspired by the image of the Sheriff in old westerns films. In this item one can see that the word Sheriff is written on the star. However, we can relate to the sensitivity and connotation it arouses." "The item has yet to arrive in Israel, and the company decided to immediately remove it from stores around the world and destroy it. We wish to express our sincere apologies if as a result we have offended our costumers' feelings," said Zara.

On Zara's Facebook page enraged comments by angry clients from all over the world had been written on the company's wall. Shocked consumers wrote "Seriously??". Marine Le Moal wrote "I assume stupid and ignorant people work at Zara," while Arthur Krop from Rishon LeZion wrote "I just have a question: Does it come with a temporary tattoo on the wrist? Also, do you have S.S. jackets for kids?"

Shay from Tel Aviv told Ynet that he saw the outrageous shirt when a Facebook friend of his from Germany uploaded the image of the shirt with the caption "Oh My God".

"I looked at the shirt and the rest of the collection and came to the conclusion that those who designed it and authorized it are a bunch of idiots," said Shay.

Yonatan Simon Salem, editor of an Israeli website in French and the representative of the French community in Israel, told Ynet that he was appalled by the collection and plans to ban the fashion company.

"One of the things I felt when I saw the collection was utter disgust. My grandfather was a survivor of Auschwitz, but even if you don’t have holocaust survivors as relatives it is disgusting. I will not return to Zara soon," said Simon Salem. "Everybody knows that this not a typical cowboy attire," he added. Tomer from Gan Yavne who entered Zara's online catalogue to buy clothes for his kids saw the shirt and was furious. "I felt very angry when I saw this so called cowboy t-shirt. People have a short memory. This garment was created out of ignorance or anti-Semitism. Now there is absolutely no way I am ever buying anything from Zara. If the people in Zara doesn't know what this garment symbolizes they are ignorant or just simply anti-Semitic". Emily, a fashion writer from Tel Aviv said "when I saw the shirt I couldn't continue scheming through the collection. To me it was obvious that there is nothing remotely close or connected to the sheriff motif, as they describe it". "A sheriff doesn't wear a stripe shirt; the connection between stripes and a yellow star has only one connotation – Holocaust concentration camp uniform. Zara, you have made your point loud and clear and just lost me as your client," added Emily.