In the Gaza conflict, while Egypt and Israel may not be brothers, they are certainly cousins with a joint interest in fighting Hamas, which controls the densely populated Gaza Strip. As an Egyptian-brokered cease-fire is expected to take hold soon, it has reinforced Egypt’s central position in the Arab world as the only country able to negotiate between Israel and Hamas.

It is also likely to solidify the position of Egyptian President Abdel Fatteh Al-Sisi, a former army chief, who had little experience in foreign policy before he was elected. “In terms of security, it is expected that he would be able to function well but he has not been tested when it comes to foreign policy,” Maye Kessem, a professor of political science at the American University of Cairo told The Media Line. “If he succeeds with the cease-fire, it is good for Egypt and good for the president.”

Egyptians want stability and security, and the recovery of the Egyptian economy. Sisi has maintained his popularity despite harsh crackdowns on the Muslim Brotherhood and his predecessor, Mohamed Morsi. Hamas, which is an offshoot of the Muslim Brotherhood, has also been a target for Sisi and the government-controlled media. 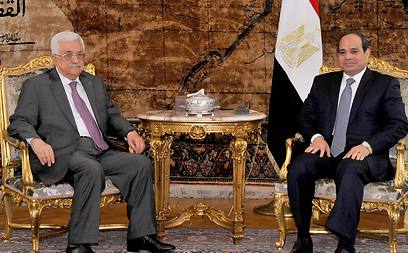 Abbas and al-Sisi in Cairo (Photo: AFP)
Over the past year, Egypt has destroyed hundreds of smuggling tunnels leading from Egypt into the Gaza Strip that were used for bringing in everything from cement to weapons. Israel has destroyed a similar network of tunnels from Gaza into Israel that were to be used for staging terror attacks. At the same time, any long-term solution for the 1.8 million Palestinians living in Gaza will have to involve both Egypt and Israel. During the cease-fire negotiations, Sisi has adopted Israel’s position that there can be no preconditions to the truce – that both Israel and Hamas must stop firing, and then negotiations can begin on various Hamas demands. Egypt became the mediator between Israel and Egypt because Israel refused to meet directly with a Palestinian delegation that includes members of Hamas, which Israel says is a terrorist organization. Egypt, as the largest Arab country with a population of 87 million, has always been important in the Middle East. It is also one of only two countries - along with Jordan - that have peace treaties with Israel; and Egyptian and Israeli intelligence have long maintained close ties. During the last conflict between Israel and Hamas in 2012, former Egyptian president Mohamed Morsi was instrumental in orchestrating a cease-fire between Israel and Hamas. “The Gaza crisis provides Sisi with an opportunity to resurrect Egypt’s regional role,” Lina Al-Khatib, the director of the Carnegie Middle East Center in Beirut told The Media Line. “But because of his crackdown on the Muslim Brotherhood, Sisi does not have a lot of influence on Hamas, which jeopardizes Egypt’s prospects for success.” The media in Egypt has been virulently anti-Hamas during this conflict. Sisi runs the risk of being perceived as “pro-Israel” because of Egypt and Israel’s shared interests. “If you read the Arab press, many of the commentators do not like it but they don’t dare to say he is pro-Israel,” Tzvi Mazel, a former Israeli ambassador to Egypt told The Media Line. “The Arab world is in a difficult position. People are more afraid of the Islamic State (IS) in Iraq and Syria than anything else.”

Maye Kassem of the American University agrees that few see Sisi as pro-Israel. “He is seen not as pro-Israel but as anti-Hamas, which much of the population supports,” she said.

Mazel says Sisi has made a commitment to focus on the economic development of Egypt and to fight terrorism in Sinai. That is also a goal for Israel and the two nations have been cooperating on security issues. In fact, while the Egyptian public and the powerful trade unions are virulently anti-Israel, the two nations security services maintain close ties. Some analysts say there are also new opportunities for a moderate coalition with the end of the Gaza war and the growth of the Islamic State. There is the potential for a new alliance of moderate Arab states of Egypt, Jordan, Saudi Arabia and the Gulf States, with the quiet backing of Israel. In that sense, strengthening Egypt is in the interest of both the US and Israel. As part of the aftermath of the Gaza war, the international community will have to help in the rebuilding of Gaza. Any permanent solution for the reopening of Gaza to the outside world must also include Egypt, which controls the Rafah crossing. Opening Rafah is one of the key demands of Hamas. Israel does not oppose it, but wants to make sure that weapons cannot enter the Gaza Strip. One possibility is to have Palestinian police loyal to Palestinian Authority President Mahmoud Abbas stationed at the crossing, or to have it supervised by international troops.