After fifty days of fighting, Netanyahu's popularity drops by almost fifty points, as anger grows at ceasefire, 'I am not sure he would have had a majority in Cabinet, in Likud, or even among public,' Likud MK says.

The fighting between Israel and Hamas lasted 50 days. During that time, Prime Minister Benjamin Netanyahu’s popularity soared to an unprecedented high of 82 percent in a national poll following the beginning of Israel’s ground operation into the Gaza Strip.

But by the time the cease-fire was announced on the 49th day, polls indicated that only 38% of the population stood behind the prime minister. 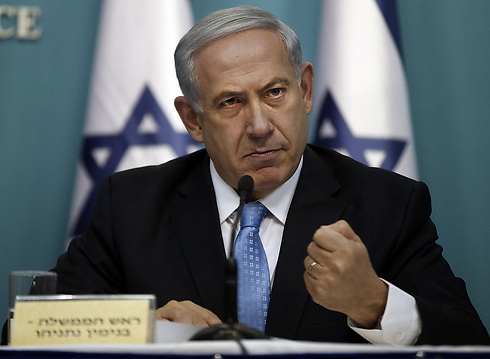 Netanyahu: We 'hit Hamas hard' during Gaza operation (Photo: AFP)
Public opinion in Israel is notoriously fluid, and the latest polls were taken before the official end to the hostilities had been made public. Yet, there has been sharp criticism of Netanyahu’s acceptance of a truce with Hamas that leaves the Islamist group in control of the Gaza Strip. “The mission was not completed,” Danny Danon, former Deputy Defense Minister and the head of the Central Committee of Netanyahu’s Likud party told The Media Line. “We promised the voters we would be decisive against Hamas, but when we had the chance we hesitated. It’s only a matter of time until we will have to face Hamas again.”

Comments like these prompted Netanyahu to fire Danon last month after the prime minister had accepted a short-lived cease-fire.

Referring to Netanyahu’s own political party, Danon said the Likud Central Committee will convene within two weeks in Ashkelon – a city in the southern part of Israel that was among the most frequent target of Hamas rockets – and he hopes the Prime Minister will attend. Many residents of the south who were forced to abandon their homes during the fighting have called on Israel to continue the military operation in order to make sure that Hamas will not be able to rebuild the sophisticated underground tunnels that it used to infiltrate into Israel and try to kidnap Israeli soldiers.

Danon is quick to mention a statement Netanyahu made in 2009, months before he became prime minister for the second time. During that time, Israel led a similar ground invasion into Gaza. Exhorting his predecessor, Netanyahu insisted, “We need an action that will remove the threat. There is only one action that will accomplish this and this is to topple the Hamas regime in Gaza.” But now, as prime minister, Netanyahu accepted a cease-fire as Hamas celebrated the “victory” in the streets of Gaza.

Wednesday Netanyahu claimed Hamas was "hit hard" during the operation, and won few gains in the ceasefire agreement that brought it to an end on Tuesday, however, many remain skeptical.

Netanyahu is also being criticized for making the decision to end the operation unilaterally, without calling for a vote by his cabinet. Legally he is relying on a previous vote in the cabinet, which provisionally allowed him to accept a 72-hour-truce. But Danon said he didn’t call for a vote because he was afraid of the opposition.

“I am not sure he would have had a majority in the cabinet, in the Likud party, or among the public,” Danon said. “He chose to do it this way to avoid criticism.” Netanyahu’s right flank in the government has been sharpening its knives even before the fighting with Hamas began. Foreign Minister Avigdor Lieberman dissolved a partnership deal that his hard line party, Yisrael Beytenu (Israel Our Home), had with Netanyahu during the last election, assuming it could win more votes on its own. As the negotiations for a truce with Hamas proceeded, four members of the eight-member diplomatic security cabinet said they would have voted against it, meaning it would not have passed. Others have sniped at Netanyahu for his handling of the crucial US-Israel relationship during this crisis. Early in the fighting the US said it was “appalled” by Israel’s shelling of a United Nations school that left at least ten people dead. Netanyahu hit back against US pressure for a cease-fire, telling American Ambassador to Israel Dan Shapiro to pass on a message to the administration “never to second-guess me again,” according to Israeli press reports. The US even temporarily held up a shipment of Hellfire missiles to Israel in what many analysts said was a clear display of the administration’s disapproval. “He shouldn’t have gone into a direct confrontation with the Americans,” Israeli Knesset (parliament) member David Tzur, a member of the Hatnuah Party, which is part of the governing coalition, told The Media Line. “We cannot have a situation in which we have a direct clash with the US.” Nevertheless, Tzur said he supports Netanyahu’s decision to accept a cease-fire now and that he handled the military aspects of the fighting with Hamas well. Despite the criticism, it seems unlikely that there will be a serious move for new elections. The current Israeli government is less than a year and a half old, and the Israeli public has grown tired of elections every two years, as had been the previous norm despite the official term being four years. In addition, the Knesset members are likely to want to hold onto their seats, rather than go to new elections. Some Israeli analysts say that Netanyahu might even gain from being perceived as moving from the right towards the political center.

“Even if he loses more support than he gains, he could be in a better strategic position,” Gidon Rahat, a professor of political science at Jerusalem’s Hebrew University told The Media Line. “The aim of a politician who wants to lead is to capture the median vote. Netanyahu might lose votes from the right, but gain new supporters from the center.”