In Israel, concern as Qaeda-linked rebels seize Syrian side of border

In a meeting with a delegation of the Armed Services Committee of the House of Representatives, Netanyahu said that 'just now an extension of al-Qaeda in the Golan Heights has kidnapped dozens of UN forces. We must take a joint position in order to defeat them.'

The IDF Northern Command is closely following the recent developments along Syria-Israel border, after Syrian rebel forces, including members of the al-Qaeda-affiliated Jabhat al-Nusra, which is considered more radical than Hamas, on Wednesday seized the Syrian side of the border crossing with Israel in the Golan Heights.

The fate of the 43 UN Fijian peacekeeping troops kidnapped by the rebels in Quneitra is still unknown. Secretary-General Ban Ki-moon condemned the abduction on Thursday, and called for the immediate release of the troops.

The IDF views the latest developments as a further loss of sovereignty of the Syrian army in the Golan Heights. Addressing the issue on Thursday night, Prime Minister Benjamin Netanyahu linked it to the activities of other terrorist organizations in the Middle East. 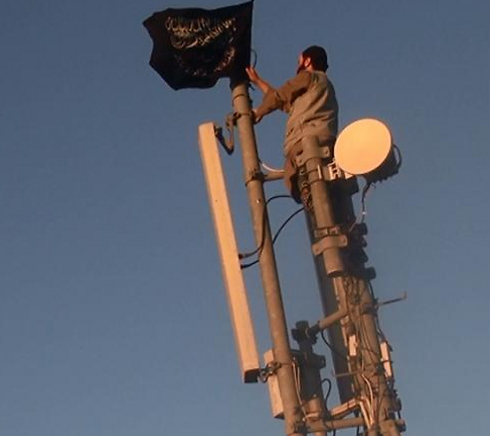 ISIS flag in the Syrian border
In a meeting with a delegation of the Armed Services Committee of the House of Representatives, Netanyahu said that "just now an extension of al-Qaeda in the Golan Heights has kidnapped dozens of UN forces. We must take a joint position in order to defeat them."
Syrian rebels near the Israeli border
X

Syrian rebels near the Israeli border

The prime minister added that, "we have common enemies - radical Islamist terrorists who are ruthless executioners, terrorizing people the people under their control." 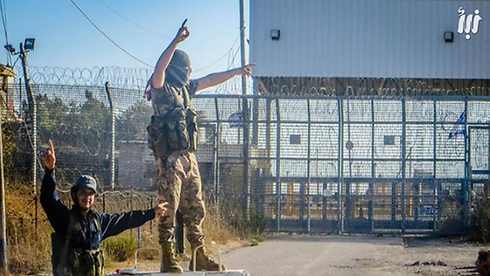 Al-Qaeda rebels celebrating near the Israeli border
From Israel's perspective, the loss of the Quneitra crossing by the Syrian army for now only means the halt in the transfer of apples or preventing the passage of young Druze studying in Syria. At the moment, the only interaction that the security establishment has with the rebel forces on the Syrian side of the border, concerns humanitarian issues, such as the treatment of the wounded in Israel and helping to deliver basic equipment. Deeper into the Syrian Golan Heights, Assad's army is still in control and has is fighting the rebels to prevent them from seizing the entire swathe of the county that runs alongside the border with Israel. By Thursday evening, the fighting between the rebels and Assad's army had calmed down somewhat, after the Syrian army had lost in an unprecedented manner controls over the sole border crossing with Israel. As well as the Syrian side of the crossing, the insurgents also control the old city of Quneitra and in effect most of the border area that abuts Israel.

The only exception is a small zone in the northeast corner of the border, on the slopes of Mount Hermon, close to the Syrian Druze village of Al-Khader. Here too, however, the presence of the Syrian army has dwindled.

Fijian Commander Brig. Gen. Mosese Tikoitoga said three vehicles filled with about 150 armed rebels had converged on the Fijian camp at about 7:30am Thursday.

He said the rebels demanded the Fijian soldiers leave within 10 minutes and insisted they board the rebel vehicles. The Fijians were then taken by the rebels to an unknown location. He said he's been told they were later transported back to their original post.

Aquino III, who was travelling south of Manila, told a crowd that the situation involving the Filipino peacekeepers was "stable."

Brig. Gen. Domingo Tutaan said the rebels surrounded two encampments about 4 kilometers (2.5 miles) apart occupied by Filipino peacekeepers and demanded that they give up their firearms, but the peacekeepers refused. "This resulted in a standoff," he said, reading from a statement.

However, "the potential for de-escalation is still positive," he said. The military leadership in the Philippines was in direct communication with the peacekeepers, he added.