Netanel Maman, 21, who was home for the weekend after fighting in Gaza, went to buy cigarettes with his brother Tamir when Grad rocket exploded near their car; Tamir, also a soldier, was lightly hurt.

Netanel Maman, who was critically wounded a week ago from a Grad rocket hit in Gan Yavne, succumbed to his wounds Friday, becoming the 71st Israeli casualty in Operation Protective Edge. He will be laid to rest on Friday at 2pm at the military plot in the Gan Yavne cemetery.

Corporal Netanel Maman, 21-years-old from Gan Yavne, was a technician at the IDF's Ordnance Corps and fought in Gaza during the ground operation. He was posthumously promoted to the rank of Sergeant. 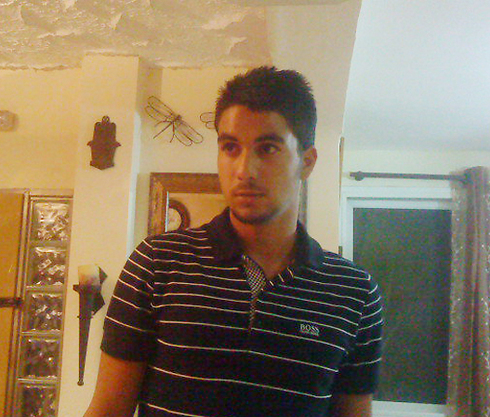 Netanel and younger brother Tamir, also an IDF soldier, both home for the weeked, decided to go to the gas station after Friday night dinner last week to buy cigarettes. Their father Shlomo, a member of the Gan Yavne council, tried to talk them out of going, but they went anyway.

"They were waiting at a stop light and then the siren went off," brother-in-law Sharon Ben-David said. "Tamir, who drove the car, managed to get out and take cover. Netanel didn't make it out of the car on time and the rocket exploded next to him. The shrapnel flew through the car window and Netanel suffered mostly neck and head wounds." 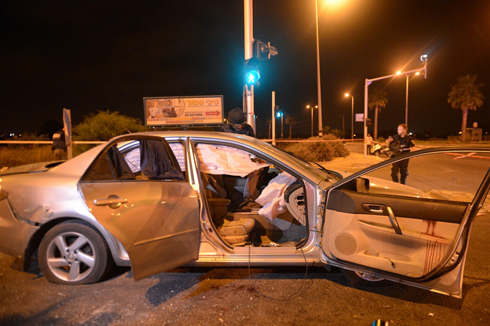 The Maman brothers' car after it was hit by shrapnel from the Grad rocket (Photo: Avi Rokach)
The brother-in-law said that the family has a WhatsApp group. "Right after the siren we began sending messages in the group to make sure everything was okay. We called on everyone to confirm they were okay and Netanel and Tamir did not answer. We tried to call them but there was no answer. It was only later that Tamir called and said he and his brother were wounded and were on their way to the hospital."

Tamir Maman, who was lightly wounded, was released from hospital that same night. But his brother who was critically wounded died of his wounds on Friday.

For the past week the family was waiting outside the Intensive-care unit at the Rabin Medical Center in Petah Tikva, praying for their son's life.

"The parents were very optimistic and were hopeful the situation improves. There were instances before in which soldiers were critically wounded and managed to recover. We were told that the night he was wounded, there was a story about another soldier who was wounded, recovered and even got married, so we wanted this to happen for us as well," brother-in-law Sharon said.

Doctors told the family on Thursday that Netanel's situation was deteriorating rapidly. He was suffering from high fever, edema and other medical issues.

While the rest of the family members rushed to the hospital, Netanel's father went to see a rabbi to receive a blessing for his son's health, but Netanel passed away at 9:30am.

Eden Abergil Nagar, who caused an outcry in 2010 when she posted photos from her IDF service alongside a tied Palestinian, was also lightly hurt in the same rocket attack. She was released from hospital a day later.