The politics of war: Protective Edge in retrospect

INSIGHT: Part two of Nahum Barnea's in-depth look at the key players and events in the 50-day conflict between Israel and Gaza's Hamas rulers.

Part one: The bitter tears of victory

On one of the last days of Operation Protective Edge, the IAF hit a courier for Hamas money. The images showed banknotes flying away from the site of the explosion. More money couriers were killed in a similar way. It turns out that during the fighting, Hamas managed to smuggle large amounts of cash into Gaza, and according to one estimate, tens of millions of dollars. It is reasonable to assume that the money was smuggled from Sinai, through one of the tunnels that had not been found by the Egyptian army.

Lack of money was the primary hardship that dragged Hamas into the war: All of its channels used to bring in money outside were closed, including the tunnels. Hamas government employees, both armed and unarmed, had not received salaries since February. Israel and Mahmoud Abbas, who wanted to weaken the Hamas government, had been too successful. 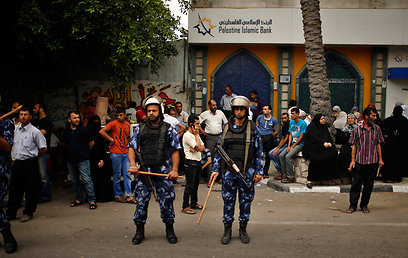 Gaza bank run after PA released salaries (Photo: Reuters)
And now, at the height of the war, the money had arrived. But now there was no way of paying the people and putting the money to work, to move around.
Insight into Gaza op
Bitter tears of victory: Protective Edge in retrospect
Nahum Barnea
In part one of a special feature, Nahum Barnea takes an in-depth look at the key players and events in the 50-day conflict between Israel and Gaza's Hamas rulers.
Bitter tears of victory: Protective Edge in retrospect
Thus money also played a major factor in the transition from fighting to lull. The ATMs were on strike in Gaza. The money had dried up. Out of desperation, people had begun bartering items for food. The pressure grew on the local Hamas commanders, and they in turn increased the pressure on Khaled Mashal to accept the terms of the ceasefire. It was not money alone that led to war, and it was not money alone that stopped it. But it played a significant role in each stage of the conflict.

Four high-rise buildings were bombed by the Israel Air Force in the last week of fighting - three in Gaza City and one in and Khan Younis. (The IDF mentioned five, but the fifth was a low-rise shopping center in Rafah.) The photographs were reminiscent of the famous controlled explosion at the Sands Hotel in Las Vegas: The collapse began in the upper floors and gradually went down to the ground. What remained was a cloud of dust and a huge pile of building material. The IDF had ordered the occupants to leave. Everyone was evacuated - even the members of Hamas. According to IDF reports, no one was killed and no one was injured.

Man-made disasters undoubtedly get the pulse racing. It is exciting to see such a tangible asset, of such value, become dust within seconds. I believe in the United States there is an entire cable channel is focusing on this kind of disaster. It seems that in Gaza too they invoked a sense of awe: According to our intelligence, the attacks on high-rise buildings reinforced in Gaza the understanding that Israel was willing to go very far indeed, and it was time to stop. Hamas called the last week of fighting the "towers stage."

The IDF called the multi-stories the "towers of terror." When I asked what was in these buildings that warranted such an impressive nickname, whether rockets had been fired from them, whether military commanders had been housed in them, I was given general responses: There were war rooms, ie offices. Maybe there were weapons arsenals there too.

If so, why didn’t we hit the towers in the first week, I asked. I was met with silence. If blowing up the towers helped to bring about a ceasefire, be thankful. 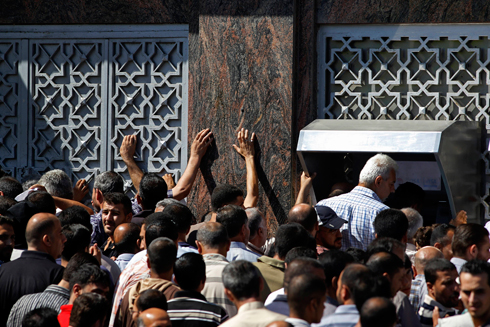 Even so, there are two causes for skepticism. The first concerns the population living in the buildings – Gaza's civilian intelligentsia. Their transition from an apartment with a sea view to a lesser residence will not especially warm them to the Israelis; The second relates to the approval of the action at the political level. Blowing up empty high-rises is not exactly an image of victory, but nonetheless, it is an image.

The death of the Cabinet

Operation Protective Edge ended without a decision by the Cabinet. Netanyahu and Ya'alon made the decision, and then dispatched the head of the National Security Council Yossi Cohen to update ministers. Ministers protested: What is the purpose of a cabinet if it is passed over when making the most important decision on military action? Cohen handed over the questionable opinion of Attorney General Yehuda Weinstein, and that was the end of the matter.

The truth is that the ministers should be grateful to Netanyahu. He gave them a golden opportunity to score points with their electorate without having to pay a price. Four of them, Avigdor Lieberman, Naftali Bennett, Gilad Erdan and Yitzhak Aharonvitch - half of the security cabinet - announced they would vote against. If they had done so, they would have been directly responsible for the continued fighting, for the inevitably higher death toll along the Gaza border. It's easy not hard to imagine them during such as vote: Each glancing at the others, hoping that someone else would vote against, and thus enabling him to be a hero without taking responsibility. 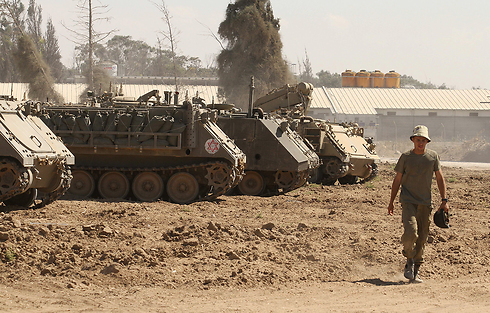 Netanyahu would try to persuade them. A few weeks ago I set before you an Egyptian proposal, he would have been able to say. There was no demilitarization, there was a port. You rejected it. You demanded amendments.

The Egyptian proposal was watered down at our request, he would have told them. We cannot afford to say no to Egypt.

Secondly, he would have gone on to ask, what's the alternative? Even if we use more force, we will still get the same ceasefire agreement in the end.

Thirdly, you cannot oppose the proposal that the prime minister, defense minister, IDF General Staff and Shin Bet chief are all standing behind. It's unacceptable; irresponsible.

One of the direct consequences of the end of the operation is the abolition, in practice, the Cabinet. Netanyahu views it as the enemy. Ya'alon has accused the ministers of leaks (he did so, says one minister, in the full knowledge that the only major leaks were from the office of Prime Minister Benjamin Netanyahu).

This is issue undoubtedly be discussed, if there is a committee of inquiry, and if not there, then in the High Court. The status of the Cabinet is enshrined in law, and in line with the recommendations of all commissions of inquiry on security issues, from the Agranat Commission to Winograd. But during this operation it became a joke: Initially, the Cabinet convened every day, for meaty, showy discussions but without coming up with any alternatives. Ministers could not prepare, could not consult. In the last week, it did not meet at all.

The breaking point was the discussions on the ceasefire. The right-wing ministers asked how the ceasefire would help eliminate the tunnels. The answer was: only for the good. The IDF would continue to identify and destroy the tunnels uninterrupted. But then it became clear that when there is a ceasefire, the Gaza civilians return, along with members of Hamas, and when dealing with the tunnels, they shoot, and when they shoot, you have to return fire. This is in effect the story of how the Givati soldiers became embroiled in Rafah. The Cabinet ministers feel they have been misled: they were sold that there was a ceasefire, and there never was.

The Second Lebanon War delivered Ehud Olmert and his government a fatal blow. It went on to serve for another three years, but the public had rejected it. Then opposition leader Benjamin Netanyahu and his erstwhile aide Naftali Bennett found ways, both overt and covert, to fan the flames. The advantage Netanyahu has over Olmert is that the former now has no opponent. Many are fed up with the political system, but there does not currently seem to be anyone able to replace it.

Military conflicts usually push voters rightwards. This seems to be the case after this conflict; while Netanyahu has plummeted in public opinion, the Likud has not been weakened.

Martin Indyk, who was sent by Secretary of State John Kerry in an unsuccessful attempt to advance the peace process, this week gave a very worrying interview to Foreign Policy magazine. He painted a picture of a conceited Netanyahu, who is dismissive of the political and demographic changes in the United States, and seeking out allies elsewhere, in Russia, India and China.

The introspection for Israelis concerns the deterioration in relations between Jews and Arabs in the country. This was a hard summer, from the kidnapping of the three teens, through to the murder of the Palestinian boy in Jerusalem, to the manifestations of racism and intolerance that occurred during the fighting in Gaza.

It was a hard summer for anyone looking to the government for security, leadership, vision. There is indeed a month until the New Year, but it is not too soon to say: May this cursed year end already.