Settlement Gva'ot now declared part of Israeli land in West Bank; Peace Now: 'This is a message to the Palestinians that Israel would negotiate with Hamas and at the same time destroy chance to reach true accord with moderates.'

Israel announced Sunday that it will recognize the 4,000 dunam Gva'ot settlement in the West Bank as state land.

The IDF said there was no Palestinian claim on the area in question, but those against the decision could file their objections within 45 days. 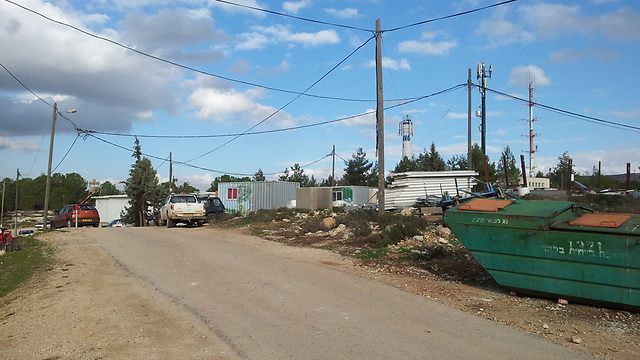 Gva'ot settlement
Gva'ot, located at the western part of Gush Etzion, is officially considered a neighborhood of the settlement Alon Shvut. In actuality, it operates as a separate community a few kilometers away. Gva'ot has not been officially recognized by Israel since it was built without zoning permits, so in order to start the process of declaring it a recognized community, the state had to delineate the boundaries of the community. Most of the territories in the West Bank are divided to three categories: private land (whose ownership is registered with the state), state land (areas that haven't been worked and are not listed in the with the Israel Land Authority that are considered state-owned), and lands under survey or "admot seker" (land that has reverted to the state due to lack of use for 10 years and lack of registered ownership, but which has yet to be declared as such).

These surveys, which in many cases take years to carry out, aim to determine the ownership of the land based on several criteria. In most cases, the declaration of status is delayed because the government has yet to make the decision on the issue.

Gva'ot is located in the heart of Gush Eztion, near the hill on which the men of the Haganah Convoy of 35 were killed during Israel's War of Independence in 1948. In order to create territorial continuity from the communities to the Green Line, the government decided in 1982 to build a Nahal settlement in Gva'ot.

In June of 2014, the three Israeli teenagers - Gil-Ad Shaer, Naftali Frenkel and Eyal Yifrach - were kidnapped and murdered in that area.

"The announcement paves the way to establishing the new city of Gva'ot," the head of the Gush Etzion Regional Council, Davidi Perl, said. "The murderers of the three teens wanted to plant fear in our hearts and disrupt our daily lives, and our answer is strengthening the settlements and constructing both inside the main blocs and outside of them."

The deputy director of the Yesha Council of Settlers Yigal Dilmoni called the decision on Gva'ot "an appropriate Zionist response to the terror attacks on Israel."

He also called on the government to go further in developing settlements in the West Bank.

"The Defense Ministry needs to authorize the construction of hundreds of housing units in the territory and the building of additional neighborhoods throughout Judea and Samaria. In the past, declaring lands as state lands was the routine work of the Israeli Civil Administration and not a one-off thing. We have to go back to that as soon as possible."

Peace Now director Yariv Oppenheimer, on the other hand, said the move was "a knife to the back of Abbas and it is sending a message to the Palestinian people that the government of Israel is negotiating with Hamas, while at the same time destroying any chance to reach a true accord with the moderate people."