Lapid reiterates need to disarm Hamas, says Israel must work reinforce PA and must lead international summit on Gaza amid ISIS incursion in Iraq: The threat of terror is a common threat to the entire western world.'

Finance Minister Yair Lapid spoke to international media Sunday and said "We had major military achievements and have now moved to the diplomatic front. The ceasefire is only the beginning of the next stage of the operation, the diplomatic stage that must lead to the demilitarization of the Gaza Strip - the only measure (which will) achieve a long term quiet."

Commenting on a wide range of topics, from the economy to ISIS, Lapid, who is also a member of the Security Cabinet, said "We cannot, and will not, allow a situation whereby this ceasefire is the beginning of the countdown to the next round of fire." Hamas knows the price they have paid and they know the price they will pay if they start firing again."

Lapid is in the midst of promoting a regional summit on Gaza, which he said "should focus on one thing, ensuring that rehabilitation (of Gaza) takes place alongside demilitarization." 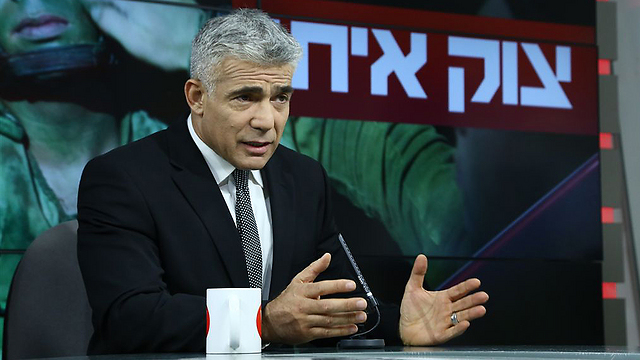 According to Lapid, "On the 22nd September the donor countries are scheduled to meet in New York (and) will commit aid to rebuild and rehabilitate Gaza. Israel must act before that to avoid a conference where Gaza gets support and Israel gets nothing.

We need a regional conference, with the Egyptians, the Saudi's, the Gulf States and of course the representatives of the Quartet. That conference should focus on one thing, ensuring the rehabilitation takes place alongside demilitarization." Lapid further noted that European and American leaders backed the idea of demilitarization during the operation and "now we need to work with them, and with the Arab world, to make that a reality. Amid growing criticism at Israel in general and Prime Minister Netanyahu specifically for negotiating with Hamas – a move many say empowered the group at the expense of moderate Palestinian President Mahmoud Abbas and his Palestinian Authority – Lapid urged more power be given to the PA, and said such a move could help facilitate the renewal of peace talks. "We must return the Palestinian Authority to the border crossings, where they belong. We must ensure that the framework is put in place for a sustainable and long term solution. The success of a regional conference can also provide the framework for a wider diplomatic horizon which will take advantage of the changes in the region to the mutual benefit of Israel and the Arab world." Reiterating Netanyahu's past comments regarding Hamas and ISIS (Islamic State) being a "branch of the same tree", Lapid said that "The threat of terror is a common threat to the entire western world." According to the finance minister, the threat poses and oppurtuntiy for Israel - "the world understands that we face an ideology committed to death and destruction. An ideology of brutality towards non-Muslims and towards anyone they see as the wrong type of Muslim. That is Hamas as well. A group which glorifies the death of children. A group which carries out cold blooded executions in the street. We watch the Islamic State and we have no doubt that we must hit Hamas hard so they never get the opportunity to do what the Islamic State is doing in Iraq and Syria."

Regarding his field of responsibility, Israel's economy, Lapid as "The end of the military stage also brings with it the bill. 50 days of fighting is an expensive matter. (and) the IDF needs to restock and we will not spare one shekel when it comes to the security of the citizens of Israel."

Earlier Sunday, Israel's Cabinet approved the bill proposed by Lapid and Netanyahu for a NIS 1.3 billion five-year plan for the economic, social and communal development of Sderot and the communities in the area adjacent to the Gaza Strip. The Cabinet also approved a NIS 200 million plan for security infrastructure in the area. "We must support the communities around the Gaza Strip and throughout the south. They need to rebuild their lives and rebuild their homes. It is our responsibility to help them and that is what we are working towards. Despite the financial burden we will be able to bear most of the cost of the operation within the 2014 budget. Israel's economy is strong and it is robust. Our currency is strong. Investments are still strong." Nonetheless, Lapid urged "the world to come visit Israel, come and invest in Israel. The most Zionist act the Jewish community around the world can do today is to book a holiday and come spend the High Holy Days in Israel."