Following US rebuke of Netanyahu administration's move to claim 400 hectares in Gush Etzion, European powers warn 'it will do serious damage to Israel in international arena.'

The UK and France condemned on Monday an Israeli government decision to appropriate 400 hectares of land near Gush Etzion in the West Bank. Late on Sunday night, the US rebuked Israel, calling the move "counter-productive" to efforts to achieve a two-state solution between Israel and the Palestinians and urging Jerusalem to reverse the decision.

The British government said on Monday it deplored an Israeli decision to appropriate a large swath of land inside the occupied West Bank, saying the move would seriously damage Israel's international reputation.

On Sunday, Israel announced the appropriation of land in the Etzion Jewish settlement bloc near Bethlehem, a move which an anti-settlement group said was the biggest such claim in 30 years. 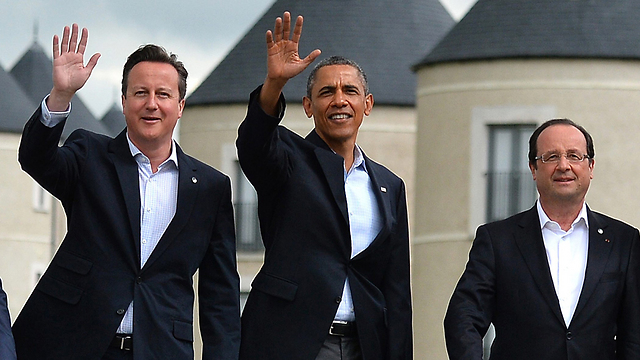 David Cameron, Barack Obama, and Francois Hollande (Photo: AFP)
Some 988 acres in the Gush Etzion settlement bloc near Bethlehem were declared "state land, on the instructions of the political echelon" by the military-run Civil Administration on Sunday. "The UK deplores the Israeli government's expropriation of 988 acres (1.54 square miles) of land around the settlement of Etzion," British Foreign Secretary Philip Hammond said in a statement which echoed US calls to reverse the decision. "This is a particularly ill-judged decision that comes at a time when the priority must be to build on the ceasefire in Gaza. It will do serious damage to Israel's standing in the international community." France also rebuked the Israeli announcement on Monday. Paris "condemns" and "calls on the Israeli authorities to reconsider their decision," said spokesman Romain Nadal Quai d'Orsay. The notice published on Sunday by the Israeli military gave no reason for the land appropriation decision, while Israeli media reported the move was in response to the kidnapping and murder of the three Israeli teens. Tensions stoked by the kidnapping quickly spread to Israel's border with Gaza, which is controlled by Hamas, and the two sides engaged in a seven-week war that ended on Tuesday with an Egyptian-brokered ceasefire. Peace Now, which opposes Israeli settlement activities in the West Bank, territory the Palestinians seek for a state, said the appropriation was meant to turn a site where 10 families now live adjacent to a Jewish seminary into a permanent settlement.

Construction of a major settlement at the location, known as "Gva'ot", has been mooted by Israel since 2000. Last year, the government invited bids for the building of 1,000 housing units at the site.

Some 500,000 Israelis live among 2.4 million Palestinians in the West Bank and East Jerusalem.