IDF soldiers seriously wounded during Gaza op came together to play a round of basketball, begin new life as IDF vets, but recall friends who fell in Gaza.

Ran Abutbul from Golani suffered critical wounds after being hit in the head by a Palestinian bullet during Operation Protective Edge; Gal Gonen, a Nahal soldier, was seriously wounded after anti-tank missile shrapnel ripped into the side of his face. Tuesday night the two came together with other wounded soldiers to begin the long and difficult road to rehabilitation. 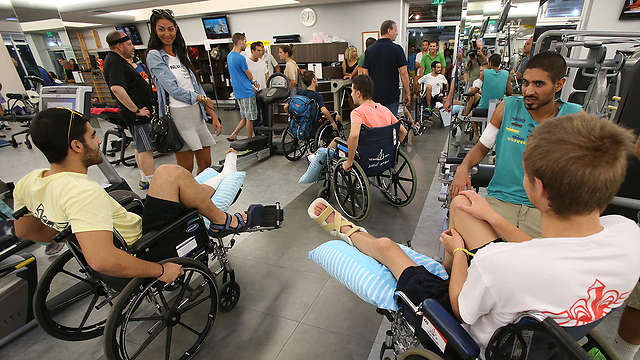 For some it was the first time leaving the hospital, if not even their sick bed. Most are still having a tough time moving around freely on their wheelchairs or crutches. But still, despite the hardship, over 80 soldiers seriously wounded during over 50 days of fighting in Gaza arrived at the Beit Halochem (House of the Warrior) in Tel Aviv to get to know one another and the place which will house the majority of their rehabilitation process when they are released from the hospital.

"A month and a half ago no one could have imagined that I would be here today, standing on my own two legs," said Abutbul , who was wounded during the first days of the operation. 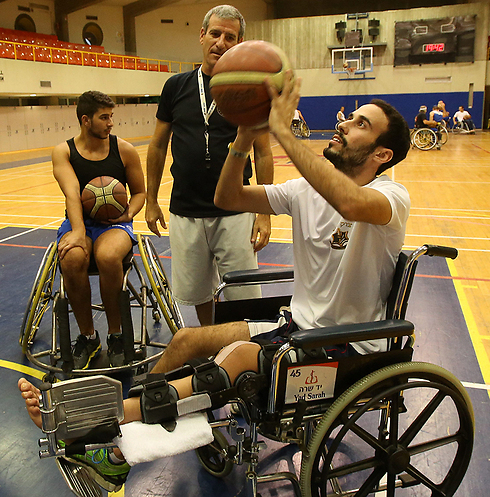 At the time, his wound was considered critical after a bullet penetrated his face and exited through his skull. Over 17 medical officials fought to save his life, and he underwent ten different surgeries.

During the fighting, Abutbul lost his good friend Staff Sergeant Daniel Pomerantz, 20, who was killed when the armored personal carrier they were traveling in in Gaza City was hit. 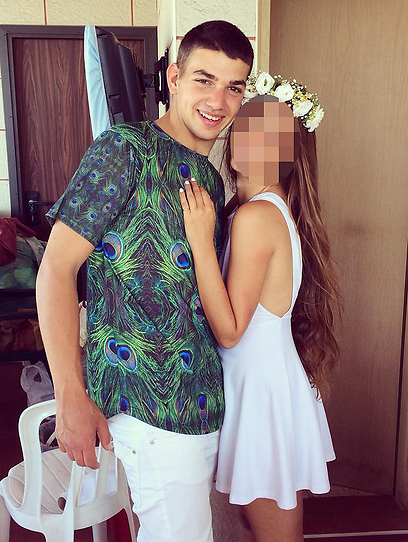 "We spent our first leave together, we were very good friends. Even today it is hard for me to believe he is gone," he said.

Gonen, from the Nahal's 931 Battalion, was wounded by the shrapnel of an anti-tank missile fired at the force he was traveling in in Beit Hanoun. 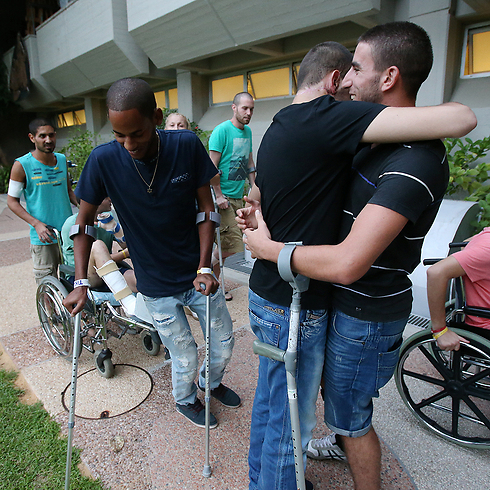 Photo: Shaul Golan
"We captured one of the houses and began to set up inside. Everyone was upstairs and I went down to the first floor to eat and suddenly there was a major blast. I couldn't move. I heard voices in Arabic and was sure Hamas had kidnapped me," he recalled. Gonen was taken to the hospital in very serious condition with shrapnel throughout his body. Nine hours after he was injured, his friend St.-Sgt. Avraham Grintzvaig, 21, was killed. "Avi was one of those who carried me in the stretcher and saved my life," said Gonen, who despite the severity of his wounds refused to miss Grintzvaig's funeral. The wounded soldiers heard about the facilities offered by the Beit Halochem (House of the Warrior) in Tel Aviv, including cutting edge rehabilitation equipment. Some of the forces have already tried out the gym, especially fitted for people in wheelchairs. The event was organized by The IDF Disabled Veterans Organization – headed by Brig. Gen Yoav Galant - and included a standup show by Israeli comic Uri Hizkiya.