An Internet video posted online Tuesday purported to show the beheading of US journalist Steven Sotloff by the Islamic State group, which called it retribution for continued US airstrikes in Iraq. Sotloff, 31, who freelanced for Time and Foreign Policy magazines, had last been seen in Syrian in August 2013 until he appeared in a video released online last month by the Islamic State group that showed the beheading of fellow American journalist James Foley. 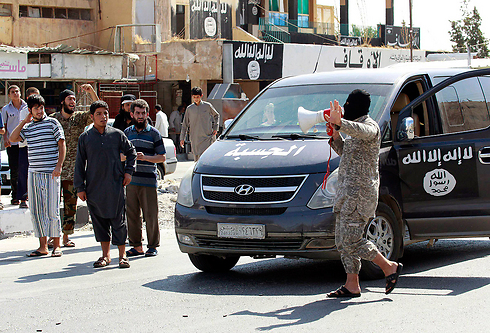 ISIS militants in Syria. (Photo: Reuters)
Dressed in an orange jumpsuit against the backdrop of an arid Syrian landscape, Sotloff was threatened in that video with death unless the US stopped airstrikes on the group in Iraq.

In the video distributed Tuesday and entitled "A Second Message to America," Sotloff appears in a similar jumpsuit before

he was purportedly beheaded by an Islamic State fighter.

The Associated Press could not immediately verify the video's authenticity. The SITE Intelligence Group, a US terrorism watchdog, first reported about the video's existence.

American officials said US intelligence agencies were making urgent checks to investigate the alleged Sotloff beheading video to determine conclusively whether it is authentic.

The purported executioner appeared to be the same British-accented man who appeared in an August 19 video showing the killing of American journalist James Foley, and it showed a similar desert setting. In both videos, the captives wore orange jumpsuits.

"I'm back, Obama, and I'm back because of your arrogant foreign policy towards the Islamic State, because of your insistence on continuing your bombings and ... on Mosul Dam, despite our serious warnings," the man said.

At the end of the video, he threatened to kill a third captive, a Briton, David Cathorne Haines. Sotloff's mother had pleaded for his release last week in a video directed at the Islamic State group. Addressing the leader of the Islamic State group by name, Shirley Sotloff said in a video her son was "an innocent journalist" who shouldn't pay for US government actions in the Middle East over which he has no control. White House press secretary Josh Earnest said he wasn't immediately aware of the purported Sotloff video and wasn't in a position to confirm its authenticity. "This is something that the administration has obviously been watching very carefully," Earnest said. "Our thoughts and prayers first and foremost are with Mr. Sotloff and Mr. Sotloff's family and those who worked with him."

State Dept spokeswoman Jen Psaki, in a separate briefing, said U.S. intelligence services would "work as quickly as possible to determine its authenticity."

"If the video is genuine we are sickened by this brutal act taking the life of another innocent American citizen. Our hearts go out to the Sotloff family," she told reporters.

The Islamic State group which has taken over a third of Syria and Iraq has terrorized rivals and civilians alike with widely publicized brutality as it seeks to expand a proto-state it has carved out on both sides of the border.

In its rise to prominence over the past year, the extremist group has frequently published graphic photos and gruesome videos of everything from bombings and beheadings to mass killings.