With Kerry, Palestinian officials set to meet on renewed Palestininan diplomatic effort for statehood, and amid wave of condemnations for Israel's move to expropriate some 988 acres, Netanyahu, US secretary of state talk.

US Secretary of State John Kerry spoke on Wednesday with Prime Minister Benjamin Netanyahu after the Israeli government's decision to expropriate some 988 acres (4,000 dunams) of Palestinian land in the West Bank.

The call came as chief Palestinian negotiator Saeb Erekat was set to meet Kerry and present plans calling for a timetable on ending Israel's occupation of the West Bank and East Jerusalem, Palestinian officials said as part of what seems to be a mounting diplomatic effort by the Palestinians' bid for statehood.

Meeting the negotiators for the first time since the 50-day war in Gaza ended, Kerry wades back into the tumult of the Israel-Palestinian peace process after months of dealing with other issues.

The talks come just days after Israel announced its biggest grab of Palestinian land since the 1980s, and as a new showdown looms at the United Nations with the increasingly frustrated Palestinians planning to push a resolution setting a three-year deadline to end the Israeli occupation. 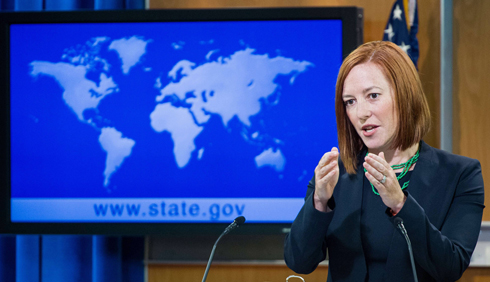 "I think they'll talk about a range of issues. There's obviously an ongoing ceasefire discussion and upcoming negotiations that will take place. There's a range of longer-term issues," US State Department Spokesperson Jen Psaki said Tuesday, asked about the talks taking place the next day.

Regarding the land seizure, Psaki issued an announcement on Tuesday condemning the Israeli decision.

"We are deeply concerned about Israel's plans to seize a large area to be used for expanded settlement building,” Psaki said in a statement. We have long made clear our opposition to continued settlement activity. We call on the government of Israel to reverse this decision," said Psaki. 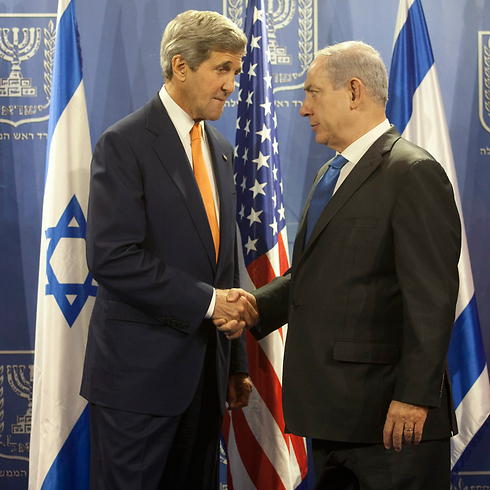 The Palestinians now intend to seek a UN Security Council resolution setting a three-year deadline for ending the Israeli occupation of the Palestinian territories.

"We will be seeking a Security Council resolution on ending the occupation on a specific date. We should know that the occupation will end within three years," Hanan Ashrawi, a senior member of the Palestine Liberation Organization, told reporters, without saying when the resolution would be put forward.

She admitted Washington would likely veto any such resolution, and Psaki stressed "our view has long been that there are a range of productive ways to have discussions about how to achieve a two-state solution. Typically, that’s not through international governing bodies."

Renewed peace negotiations for no more than nine months followed by a gradual Israeli withdrawal from the West Bank that will take no more than three years – this could be the secret diplomatic plan Palestinian Authority President Mahmoud Abbas will put forward, the Palestinian minister for religious affairs claimed Tuesday.

The discussions with Kerry will focus on establishing "a timeframe for ending Israel's occupation to be agreed as soon as possible and not after the end of this year," said a Palestinian official familiar with the plan Erekat will lay out.

In an interview with Palestinian TV last week, Abbas said it should only take "half an hour or an hour" to delineate the borders of a Palestinian state, since the United States agreed they should be based on the 1967 borders that existed before the war in which Israel captured the West Bank and East Jerusalem.

"There's either a political solution or there isn't," he said. "But going here and there, up and down, talking and not talking - it's been 20 years and nothing has happened."

If there is no agreement on borders in coming months - at least by the end of the year - Abbas said he would have no choice but to push ahead with unilateral statehood moves, a threat he has made before and carried out incrementally.

Offering a possible glimpse at what the Palestinians hope the timetable and talks will include, Mahmoud al-Habash, considered a close Abbas affiliate, said the Palestinian president hopes to discuss the core issues of the conflict, first and foremost the borders of the Palestinian state, which will be at the heart of talks during their first three months.

The remaining six months will be dedicated to the issues of refugees, the status of Jerusalem, settlements, security arrangements and water.

During talks, Abbas will also demand a settlement freeze and the release of the fourth tranche of Palestinian prisoners which Israel promised to but failed release, citing lack of progress in the last round of peace talks which ended uneventfully in April.

"He reiterated the US government’s deep concern about the prevalence and pervasiveness of anti-Semitic threats and attacks against Jewish individuals, houses of worship, and businesses during the past few months," a statement said.

The EU stressed it won't recognize "any changes to the pre-1967 borders, including with regard to Jerusalem, other than those agreed by the parties," said Michael Mann, spokesman for EU High Representative Catherine Ashton, in a statement.

"At this delicate moment, any action that might undermine stability and the prospect of constructive negotiations following the ceasefire in Gaza should be avoided," the statement went on to say.

Both Germany and the US said the move would send the wrong message to the Palestinians, and would harm attempts to reach a two-state solution to the Israeli-Palestinian conflict.

"We are deeply concerned about the declaration of a large area as 'state land' to be used for expanded settlement building," State Department Spokeswoman Jen Psaki said on Tuesday, in a statement similar to one issued by the State Department on Sunday. "We have long made clear our opposition to continued settlement activity. We call on the Government of Israel to reverse this decision."

"These steps are contrary to Israel's stated goal of negotiating a permanent status agreement with the Palestinians, and it would send a very troubling message if they proceed," Psaki's statement went on to say, urging both sides to avoid unilateral steps that could undermine peace talks.

The statement from the administration of US President Barack Obama, who has been at odds with Netanyahu over settlements since taking office in 2009, was the latest point of contention between Washington and its top Middle East ally Israel, which also differ over Iran nuclear talks.

However, criticism from within could also be heard. Finance Minister Yair Lapid addressed the move and said it harms Israel and its relations with the US.

Speaking at Calcalists Economic Forum, Lapid said "decisions like the one announced yesterday, on the nationalization of (the area) for building, raises the question 'what good does it do at this time?' This is underhanded opportunism that was not put to the Cabinet and just harms Israel."

Egypt also slammed the move, saying "This is not a positive step - it contradicts international law and will have negative consequences on the peace process," a foreign ministry statement in Cairo said.

Egypt last week mediated a permanent truce between Israel and the Hamas rulers of the Gaza Strip enclave to end a bloody and devastating 50-day war - the deadliest in years.

Rights' groups also condemned the decision: "As far as we know, this declaration is unprecedented in its scope since the 1980s and can dramatically change the reality in the Gush Etzion and the Bethlehem areas," Peace Now said on Sunday.