Iran's Supreme Leader has reportedly approved cooperation with the United States as part of the battle against Islamic State (formerly ISIS) in Iraq, the BBC reported, citing sources who spoke to Persian-language BBC. 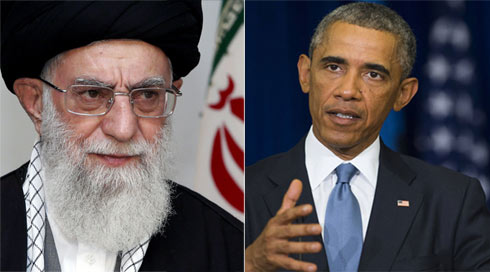 Sources reportedly old the BBC that Khamenei ordered Ghassem Soleimani, the commander of the elite al-Quds force (the overseas arm of the Revolutionary Guard) - to work with international forces fighting the Islamic State, including US forces.

According to the BBC, General Soleimani has been active in the recent months in strengthening Baghdad's defenses together with Iraqi Shia militias. The BBC further reported that Soleimani was spotted in northern Iraq, indicating that this cooperation may have already begun.

Meanwhile, America's top diplomatic and defense leaders pressed a core coalition of 10 nations to summon the willpower to go after the Islamic State group in Iraq militarily and financially, and said they must build a plan by the time the UN General Assembly meets in about two weeks.

In a private meeting with the foreign and defense ministers from the United Kingdom, France, Australia and six other nations, Secretary of State John Kerry said leaders need a clear strategy and a solid idea about what each country will contribute to the fight. And, while noting that many won't be willing to engage in military strikes, he said they can instead provide intelligence, equipment, ammunition or weapons.

"We have the technology, we have the know-how," Kerry said. "What we need is obviously the willpower to make sure that we are steady and stay at this."

Defense Secretary Chuck Hagel, sitting alongside Kerry, said the group of 10 nations represents a core coalition that will be needed to face the insurgent challenge. He said the group can then be expanded.

The morning meeting was a late addition to the NATO summit here, and is part of a broader US strategy to bring more nations into the fight against the Islamic State militants who have taken control of large swaths of northern and western Iraq and across the border into Syria.

The session, which also included dignitaries from Germany, Canada, Turkey, Italy, Poland and Denmark, focused on the Islamic State group in Iraq, but Kerry said there are obviously "implications about Syria in this" and suggested they could discuss that later in the day.

"We very much hope that people will be as declarative as some of our friends around the table have been in order to be clear about what they're willing to commit, because we must be able to have a plan together by the time we come to (the United Nations General Assembly)," said Kerry. "We need to have this coalesce."