Op-ed: As Palestinian leader turns 80, he is losing his fear of his political rivals, of Hamas and of Israel – and has nothing to lose as he turns to UN.

Next March, Mahmoud Abbas – the leader of the Palestinian Authority – will turn 80. But instead of running him down, the advanced age provides him a sense of freedom he has yet to experience. In his case, he has achieved certain strength. Officials in Israel have reached the conclusion that he is no longer afraid – not from the Palestinian street, not from Hamas, not from the US administration, and not from Israel. He has less of an interest in satisfying others. Like Frank Sinatra in that classic tune, he's going his way. After the abduction of the three teens in Gush Etzion, he publicly condemned the incident, promised the PA's assistance in helping locate them, and fulfilled his promise. During the fighting in Gaza, he spoke out against Hamas and praised the security cooperation with Israel; the PA security forces prevented mass rallies of Hamas supporters in the West bank. 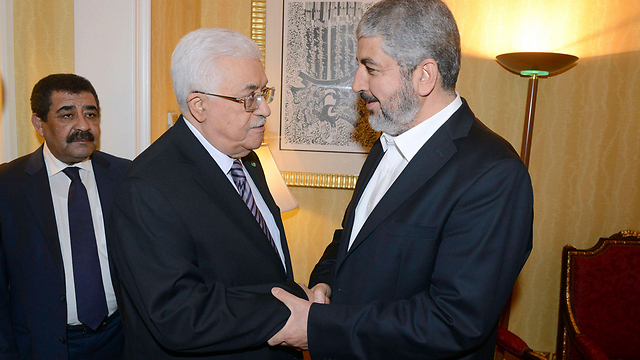 Palestinian President Mahmoud Abbas and Hamas political leader Khaled Mashal (Photo: Reuters)
While Khaled Mashal received a kiss on the cheek in Qatar, the transcript of the conversation showed Abbas severely rebuked the Hamas political leader. And even now, after the ceasefire agreement, he has refused to transfer the salaries of more than 40,000 civil servants of the Hamas government in Gaza. Abbas is insisting they are vetted, one by one. There are 70,000 PA civil servants that I already pay wages, he said. Let them replace the Hamas personnel. When Abbas heard that his rival, former prime minister Salam Fayyad, received $10 million from the United Arab Emirates that he was distributing to people in return for their political backing, including Fatah members – he sent financial investigators after him. Abbas has been funneling all the political funds through his office. However, wounded Gazans, who were evacuated to the West bank during the operation, receive envelopes of cash from another political rival Mohammed Dahlan. Dahlan's wife chairs a large charity fund, based in the UAE. 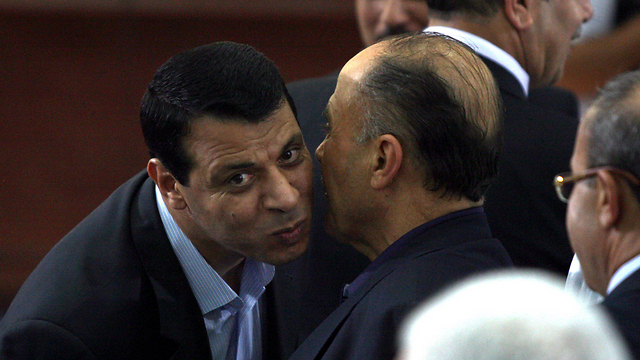 Dahlan knows that if he arrived in the West Bank, he would be immediately imprisoned.

But the lack of constraint Abbas has felt does not stop with Hamas or his political opponents. The Palestinian leader intends to submit a proposal to the UN Security Council to renew the negotiations with Israel. The resolution will be based on promises made by US Secretary of State John Kerry during his time in office: nine-month period of negotiations, with a complete construction freeze in the settlement for the duration of the talks, and the release of security detainees. 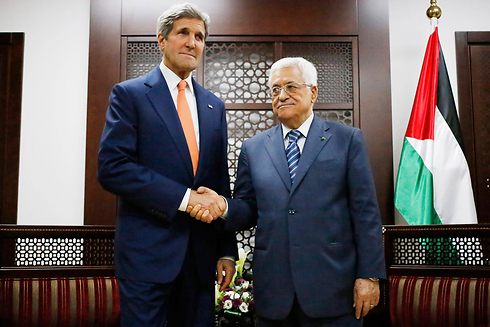 US Secretary of State John Kerry and Palestinian President Mahmoud Abbas
Abbas, in direct opposition to Israel, wants to start the negotiations with the toughest topic – the map. Israel would be asked to submit a map based on the 1967 lines, that includes territory swaps. Abbas knows the Israeli government will not respond, but at this stage of his life, the Israeli opinion no longer interests him. He knows the endless blabber between Saeb Erekat and Yitzhak Molocho – Netanyahu's surrogate in the talks – will lead him nowhere.

Instead, Abbas is looking to the US administration. Will Obama order his subordinates to veto the resolution? On one hand, the Security Council request is unacceptable to the Americans, especially now, with the upcoming congressional elections in the fall.

During the operation, one American reporter spoke to a senior White House source, a man familiar with the special relationship. The reporter asked the source what the Israeli government would do, the other responded with a ringing curse, four letters long.

Abbas is hoping that the US would resist the urge this time. If the US backs away from its veto threat, Abbas faces a new world in the international arena. But if the US does veto, he will turn to the UN's General Assembly and the International Criminal Court in the Hague.

One road leads through Washington while the other does not – but both end at the same destination, international sanctions on Israel. The Israelis, which have gotten used to seeing Abbas as a partner for peace, will need to internalize the thought that he is also an opponent – and not a simple one.

To preempt the inevitable blow-for-blow match, Netanyahu declared last week that he would no longer authorize the release of detainees. The message was intended, almost certainly, for the ears of the US administration. The Israeli government will not play ball. It has no intention of entering negotiations with Abbas.

The talk of a new political horizon was just lip service. The operation is over, and Israel is returning to its position from the evening before Protective Edge. Israel wants Hamas rule over Gaza, as long as it is weak and cut off from the world. Israel wants Fatah rule over the West bank, as long as it is weak and cooperative. The same mistakes which dragged Israel into a confrontation in Gaza will drag it into the next conflict, in the Golan, in the West bank, in Lebanon, or in the Strip; meanwhile, Israel continues to lose its standing in the eyes of the world.