Lieberman: 'No demilitarization in Gaza'

Foreign Minister says new elections not a priority while threats from ISIS, militarized Hamas continue amid 'heavy upheaval' in the Middle East.

Amid political rumblings as a result of the recent ceasefire with Hamas, Foreign Minister Avigdor Lieberman spoke at a press conference Sunday, saying that while he isn't happy with the current government coalition, elections aren't a viable option when considering the state of the region and the threats facing Israel, including the continued militarization of Gaza.

"There won't be any demilitarization in Gaza," admitted Lieberman. He then added that, "The Middle East is going through heavy upheaval and it's not clear where this is leading to. Adding political upheaval in Israel is the opposite of what we need. We have to have political stability whether or not I like the coalition."

The foreign minister said "Israel must not" agree to a situation in which Hamas remains the ruler of the Gaza Strip. 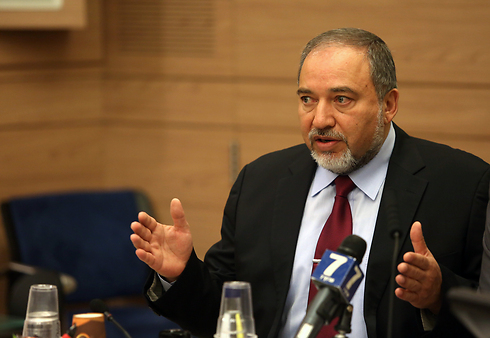 Foreign Minister Avigdor Lieberman: 'No demilitarization in Gaza'. (Photo: Gil Yochanon)
At the beginning of his statements, Lieberman also addressed the growing threat of the Islamic State (ISIS) since capturing large swaths of territory, publically beheading an Israeli citizen and apparently making every effort to make further ideological and military gains in countries throughout the world. "We're living in a completely new reality in the Middle East and we continue to act using outdated methods as if nothing has happened since the Oslo accords," he said moving to the issue of peace talks with the Palestinians. "Our conflict is not with the Palestinians," he said. "Part of the reason for failure is that the diagnosis is incorrect. Our conflict is three-dimensional and is with the Arab world, the Palestinians, and Arab Israelis. We need to produce a packaged deal that includes the three elements together." But, said Lieberman, such a deal seems less and less likely with Palestinian President Mahmoud Abbas remains in power. "There are more and more questions about the legitimacy of Mahmoud Abbas," he said.

"We saw his comments about reassessing the relationship with Hamas, but beyond that, without new elections we can't take any long-term action. Abu Mazen (Abbas) demands to dismantle the unity government because of Shin Bet documents and evidence presented to him on Hamas' intentions to carry out a coup. It's an irreparable rift."

"Hamas' demands are not to us at all, but to Abbas who will pay salaries and from the Egyptians. But they won't oblige, so (Hamas) is starting to pressure us, and that makes us out to look the weakest. We must not blink. We can't agree to a situation in which Hamas remains the sovereign in Gaza. As we've seen in all the polls - it is turning into the strongest and most popular group in Judea and Samaria as well," Lieberman said.

He said Hamas was "an organization not less dangerous than ISIS," and mentioned the executions of "collaborators" in Gaza during Operation Protective Edge.

"All of those who were executed during the Gaza operation - none of them has anything to do with Israel, and I say this definitively."

While admitting he did not believe the Gaza factions would agree to demilitarize at this moment in time, Lieberman said it was "very important to add this topic into the narrative. We must not give up issue of demilitarization. The Europeans also want a more effective inspection."

Speaking to political reporters, the Yisrael Beiteinu chairman explained the internal reasons why he's not interested in shifting the coalition. "Adding haredi parties into the coalition would immediately add NIS 3.5 billion (to the budget) and I don't think we can do that. Some in the Likud wanted to have the haredim in instead of (Finance Minister) Yair Lapid, and I thought this was not the right way."

According to Lieberman, "if something brings down the government, it wouldn't be political issues. The biggest threat (to the coalition) is, in my opinion, the civic field and religion and state. I saw (Justice Minister) Tzipi Livni was once again talking about an ultimatum on the conversion law. That is what I think the threat to the government is."