Arab Israeli IS supporters: 'They are the solution'

"When the picture becomes clear, everyone will understand that the Islamic State is the only solution for everyone. Jews should also support the state and convert to Islam."

These are just a few of the voices heard among the citizens of the country's Arab sector on Sunday, many of whom do not hesitate to express their support for the Islamic State, whose militants shocked the world after releasing videos and photos showing gruesome beheadings.

According to estimates, the number of Israeli Arab citizens who support the Islamic State is growing every day. Recently, security forces summoned the imam of a mosque in Umm al-Fahm where an Islamic State flag was hung. 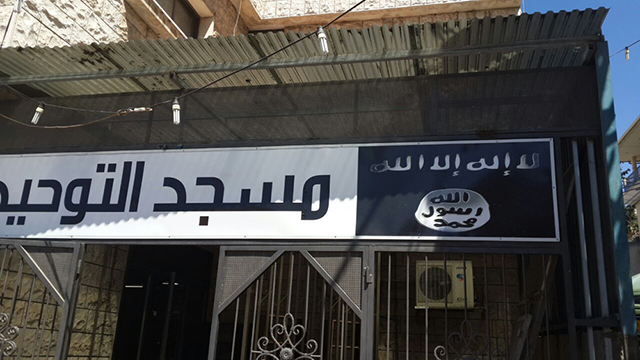 Symbol at mosque "was there before" (Photo: Hassan Shaalan)

He was taken for questioning and was asked to remove it, after which he was released. "The symbol has been there since the mosque was established – we do not support the Islamic State or any other organization," the imam said. Along with him, another person who expressed support for the brutal group was also summoned for questioning.

Israel's northern Arabs do not understand the new awareness developed around the Islamic State. A cleric that spoke with Ynet said that since the state is Islamic, its people should be treated accordingly: "I follow the will of god and support the group, as long as it continues to follow god's commandments."

The cleric acknowledged that he "saw the movies," but added that "slaughter is one of the methods of executing heretics and killers."

The same cleric claims that support for IS will grow as soon as more people recognize the phenomenon as a sovereign country. "Many Muslims are not aware that it is a stable country with a clear policy. It believes in the Quran and in the Prophet Muhammad," he said.

"Unfortunately, the media makes many mistakes in reporting about the Islamic State and publishes false information. Therefore, you do not see many people who support it. Those who know the true meaning of the state must support it.

"I'm not just talking about Muslims, Jews must also understand that they are actually the primary victims of Zionism and they should support the Islamic State and even convert to Islam," he added.

The cleric said while he has been criticized by the Arab community, it does not disturb him. "The criticism mostly came from Muslims and Arabs. After the Defense Ministry declared the Islamic State illegal, the Israeli public began to show a new awareness – they have also voiced criticism but it does not deter me or give me any reason for concern," he said.

One resident of the triangle region told Ynet that those who try to harm IS, such as the President of the United States who declared war on the group, is vicious. "I will continue to support the Islamic State because they are fighting for Islam and for Muslims and anyone who harms them is brutal," he said.

"Soon the picture will become clear and everyone will know that the Islamic State is the only solution for all of us. I urge all the Muslims and the whole world to support this state for everyone's benefit."