The Western Wall rabbi's office has filed a complaint with the police against the founders of a Facebook page exposing notes placed between the Wall's stones. The complaint was filed under the grounds of "desecration of a holy site and offending its visitors."

Meanwhile, the page's operator says the notes posted on the page were fake and that the page is no longer active.

The page, which has thousands of followers, features personal requests and confessions taken from the holy site. Its operator, who identified himself as "Amos, 41 years old, from Holon," said he was acting on behalf of the principle of "the public's right to know" and "religion and state affairs."

"It's unthinkable that we should not be exposed to the most interesting notes at the Western Wall," he said before the police got involved.

Western Wall Rabbi Shmuel Rabinowitz expressed his shock over the online exposure of notes placed at the holy site.

"The custom of placing notes in the Western Wall is an ancient custom," he said. "Exposing the prayer notes is a despicable crime violating the intimate alliance between man and his creator." 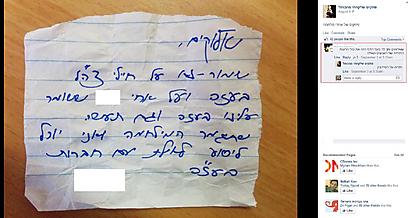 One of the notes posted on Facebook. 'God, please protect the IDF soldiers in Gaza and my brother who is defending us in Gaza, and also make this war end so I can travel to Eilat with my friends' (Facebook screenshot)

The rabbi added that "the Western Wall is a public place, and so there is no way to enforce the protection of the notes' privacy. It is every person's personal responsibility to respect the worshippers and the privacy of their prayer."

The rabbi mentioned the exposure of a note placed by then-US presidential hopeful Barack Obama at the Western Wall about six years ago, which he said had "shocked the entire Jewish world and deeply affected the site's sanctity.

"Now," he added, "this shameful phenomenon is repeating itself. How do the world's nations see us when we treat our holy site this way?"

Rabbi Rabinowitz expressed his hope that the page's operator would apologize to the people whose notes were exposed "as should be done in the month of Elul, the month of mercy and atonement."

The page, "Notes I took from the Western Wall," was started about a year ago, but most of its activity has taken place in the past few weeks, sparking heated debates about the moral justification of publishing the prayers.

The page's owner said he had received the notes from followers and called on Jerusalem residents to send him additional notes. "Almost every note conceals a story," he explained. Some of the stories were quite personal and emotional, like the one written by a woman mourning the death of her loved one in a private letter. "In all the years I have been digging through the Western Wall notes, I have found particularly scary confessions more than once," the page's founder wrote to his followers, "starting with people seeking atonement and forgiveness from 'God' for homosexual relations to teenagers asking that same god to make them dyslexic so that they'll be able to get a prescription for Ritalin and get high." The page drew many angry reactions from Facebook users who threatened to go to the police.

"You are taking advantage of the holiest place to mock helpless people, who are simply presenting their weakness in front of the thing they trust the most. You are exposing their weakness and humiliating them," wrote a man named Emanuel K.

"It's like a person going through a psychologist's notes. It's despicable," added another person.

'It's just a satirical page'

Following the complaint filed with the police by the Western Wall rabbi on Sunday, the page's operator posted the following statement on the controversial Facebook page Monday:

"I am not Amos and I am not from Holon. We started this page a year ago as a satirical page for all intents and purposes, and its entire content – the notes – are fabricated and were written by us. At first the page accumulated likes, but recently it became increasingly viral from day to day. "Not a single note presented here was real, and so you won't find any people claiming that these are their notes, because that would be a lie. Read them, the notes are pretty stupid (some of them are very stupid). "The page has exhausted itself and therefore we decided to end its activity," he wrote, teasing the media for their "thorough investigation" and claiming that "they didn't even read the posts but helped us promote the page."

"We 'apologize' to all those who have been hurt on behalf of an entire nation," the page's owner concluded.

But it seems the page's followers are not buying the explanation. They are calling "Amos" a coward and claiming that he is only looking for a way out of the mess he has gotten into after realizing that he may have committed a criminal offense. "It's illogical that it's all fabricated," one of them wrote. "There are different types of handwritings (presented) in such a way that cannot be faked. You called on people to send you notes, and I am sure that some people did." Another person wrote, "It's just an elegant way to get off your high horse without facing a criminal record." One person rushed to the page's defense, writing that "it's amazing how strong religious coercion is here. What's the difference between notes from the Western Wall and secrets on the Secret app or personal stories on Facebook? When it's digital no one cares, but when it's religious people go mad with hatred. Whether the notes are real or not, we live in a democratic state and its his right to publish it. And God doesn’t exist." Meanwhile, at the Western Wall, worshippers debated whether the exposure of personal notes online would lead to the end of the custom of placing notes in the holy site's stones. There was one thing everyone agreed about, as one of the worshippers told Ynet: "It's a serious crime. The right to privacy here must be complete. People come to the Western Wall to make requests to God, and no one should see and know what is written there."