Is Islamic State snatching Iraqi children to groom as next generation of terrorists?

Kurdish human rights group: 100 children abducted, held in Mosul. 'They're being brainwashed and given large dolls and knives to learn how to behead people.'

Heart-wrenching sobs and cries have been heard from an orphanage in eastern Mosul in recent weeks. The reason why has now become apparent: A Kurdish human rights organization claims that Islamic State fighters who have taken control of the city are holding 100 children captive at the site.

According to testimony from sources in the area, five nannies, who are not members of IS, have been forced by the captors "to maintain discipline" at the orphanage. Neighbors are reporting, however, that the caregivers have not been able to calm the children, whose cries to see their parents can be heard by passers-by.

Human rights groups in Kurdistan claim that 100 children aged six to 10, who were kidnapped in Iraq during the course of Islamic State's spree of conquests in the country, are imprisoned at the site – 50 of them come from the Yazidi community, and 50 are Shiite. 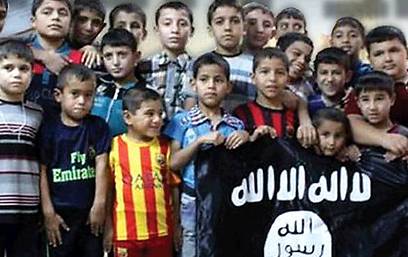 They are being held at the large Dar al-Baraim orphanage in Mosul's Zuhir quarter under heavy guard. The main concern is that the children will be brainwashed and recruited into the ranks of the organization.

Human rights activists charge that the older children are undergoing "combat training" that includes firing range exercises and physical fitness drills. Recent reports also claim that the children are being forced to attend executions and are witnessing the shocking beheadings that are taking place.

"Special Islamic State operatives are training the children in the use of knives to prepare them to participate in the beheadings," a Kurdish eye-witness said.

"They are receiving large dolls and knives to cut off the heads. We've already seen an IS fighter who was photographed with his young children who are carrying weapons, and one of them, seven years old, is holding a severed head dripping with blood."

In the wake of the reports, Kurdish human rights activists have issued an emotional statement: "The world must wake up and rescue the poor children. The demonic nature of the captors knows no limits: After they force the children to convert to Islam, they will send them out to prove their 'loyalty' to Islam."

It has emerged meanwhile that British women volunteers who have recently joined the ranks of IS have set up a "modesty patrol" with the purpose of enforcing "moral behavior" among female residents of the Islamic State in Syria and Iraq.

The organization, known as Al-Khansa, comprises some 60 women living in the IS enclave in Syria. The women patrol the streets and ensure that others behave in keeping with the stringent Sharia laws, including its dress code.