Celebrations at the NO campaign in Glasgow
Photo: AFP

Scottish voters reject independence, to remain part of the UK

With support for the union exceeding 50 percent of the turnout, secessionists could not win the vote.

EDINBURGH - Scottish voters have rejected independence, deciding to remain part of the United Kingdom after a historic referendum that shook the country to its core.

Scotland votes 'no' for independence

The decision prevented a rupture of a 307-year union with England, bringing a huge sigh of relief to the British political establishment.

In a speech made shortly after results showed the YES campaign could not win, Scotland's First Minister Alex Salmond thanked the 1.6 million Scottish voters for voting for independence, and conceeded defeat.

"Our referendum was an agreed and consented process. Scotland has decided No at this stage to become and independent country and I accept that verdict," he told supporters in Edinburgh.

"I call on all of Scotland to follow suit in accepting the democratic will of the people of Scotland," he added. 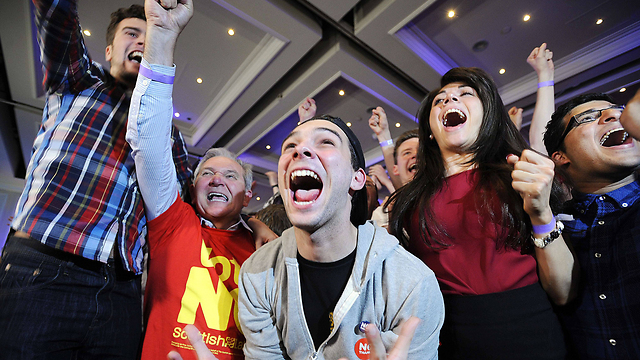 Celebrations at NO campaign in Glasgow (Photo: AFP)

Meanwhile British Prime Minister David Cameron called for "our United Kingdom to come together and move forward" after "the debate has been settled for a generation - or as Alex Salmond has said, perhaps for a lifetime."

"There can be no disputes, no re-runs - we have heard the settled will of the Scottish people," he added."

A vital part of moving forward, Cameron said, will be "a balanced settlement - fair to people in Scotland, and importantly to everyone in England, Wales and Northern Ireland as well."

A majority of voters did not embrace Salmond's impassioned plea to launch a new state, choosing instead the security offered by remaining in the United Kingdom.

Salmond had argued that Scots could go it alone because of its extensive oil reserves and high levels of ingenuity and education. He said Scotland would flourish on its own, free of interference from any London-based government.

Nonetheless, the skilled 59-year-old leader of the Scottish National Party came close to winning independence - his long-cherished goal - and still won a promise of new powers for Scotland from rattled London politicians.

Many saw it as a "heads versus hearts" campaign, with cautious older Scots concluding that independence would be too risky financially, while younger ones were enamored with the idea of building their own country.

The result saves British Prime Minister David Cameron from a historic defeat and also helps opposition chief Ed Miliband by keeping his many Labour Party lawmakers in Scotland in place. His party would have found it harder to win a national election in 2015 without that support from Scotland.

Former Prime Minister Gordon Brown, a Scot, returned to prominence with a dramatic barnstorming campaign in support of the union in the final days before the referendum vote. Brown argued passionately that Scots could be devoted to Scotland but still proud of their place in the United Kingdom, rejecting the argument that independence was the patriotic choice.

"There is not a cemetery in Europe that does not have Scots, English, Welsh and Irish lined side by side," Brown said in his final speech before the vote. "We not only won these wars together, we built the peace together. What we have built together by sacrificing and sharing, let no narrow nationalism split asunder."

For his part, Cameron - aware that his Conservative Party is widely loathed in Scotland - begged voters not to use a vote for independence as a way to bash his party.

The vote against independence keeps the UK from losing a substantial part of its territory and oil reserves and prevents it from having to find a new base for its nuclear arsenal, now housed in Scotland. It had also faced a possible loss of influence within international institutions including the 28-nation European Union and the United Nations.

The decision also means Britain can avoid a prolonged period of financial insecurity that had been predicted by some if Scotland broke away.

In return for staying in the union, Scotland's voters have been promised significant - though somewhat unspecified - new powers by the British government, which had feared losing Scotland forever.

The British pound jumped as Scotland voted to stay part of the United Kingdom. There were fears for the UK economy and its financial markets if Scotland voted for independence. But with most votes counted, the campaign against independence has won a clear victory.

Decades in the making

"Like thousands of others across the country I've put my heart and soul into this campaign and there is a real sense of disappointment that we've fallen narrowly short of securing a yes vote," Scottish Nationalist Party deputy leader Nicola Sturgeon said. "It looks as if it's not quite been enough and that's deeply disappointing," Sturgeon told the BBC. After the polls closed late Thursday, a nationwide count began immediately. Many Scots stayed up overnight in homes and bars, awaiting the result.

"Why not roll the dice for once?" Yes supporter Thomas Roberts said at one Edinburgh polling station. "I'm going to sit with a beer in my hand watching the results coming in." 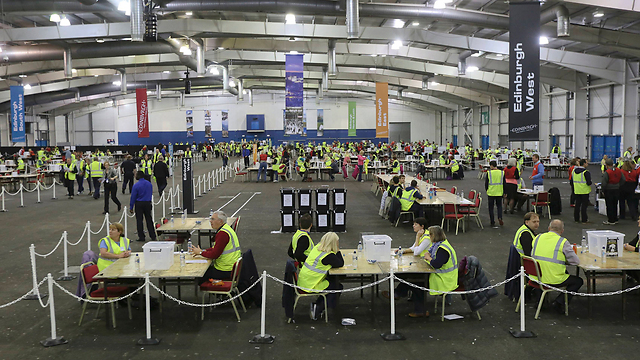 Counting the votes in Edinburgh (Photo: Reuters)
At Highland Hall outside of Edinburgh, where the final result will be announced later Friday, vote-counters at dozens of tables sorted through paper ballots, watched keenly by monitors from the Yes and No camps. Eager voters had lined up outside some polling stations even before they opened Thursday. More than 4.2 million people had registered to vote - 97 percent of those eligible - including residents as young as 16.

For some, it was a day they had dreamed of for decades. For others, the time had finally come to make up their minds about the future - both for themselves and for the United Kingdom. 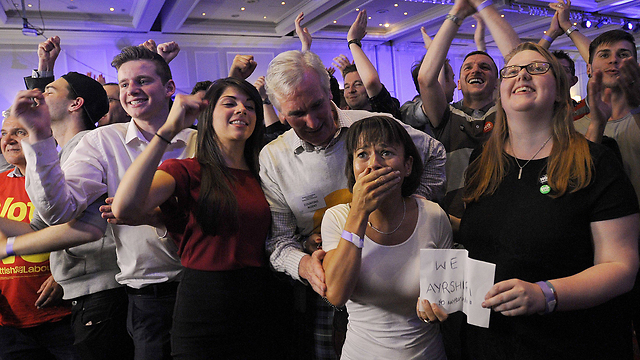 Celebrations at NO campaign in Glasgow (Photo: AFP)
"Fifty years I fought for this," said 83-year-old Isabelle Smith, a Yes supporter in Edinburgh's maritime district of Newhaven, a former fishing port. "And we are going to win. I can feel it in my bones." But financial consultant Michael MacPhee, a No voter, said he would observe the returns "with anxiety."

Scottish independence is "the daftest idea I've ever heard," he said. 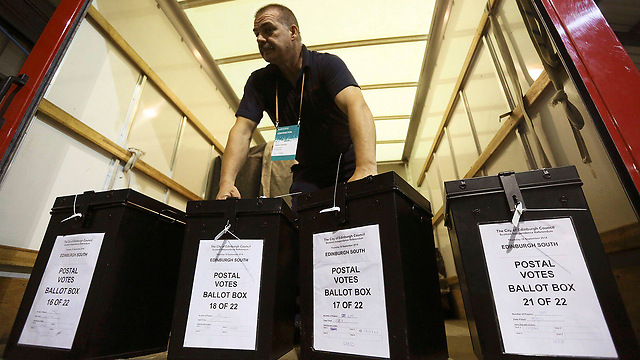 Counting the votes in Edinburgh (Photo: Reuters)
After polls closed, some No campaigners said they were confident they had swayed enough undecided voters to stave off independence. They may have been helped by a last-minute offer from Britain's main political parties to give Scotland more powers if voters reject secession and by fears about the future of Britain's pensions and the National Health Service in an independent Scotland.

The question on the ballot could not be simpler: "Should Scotland be an independent country?" 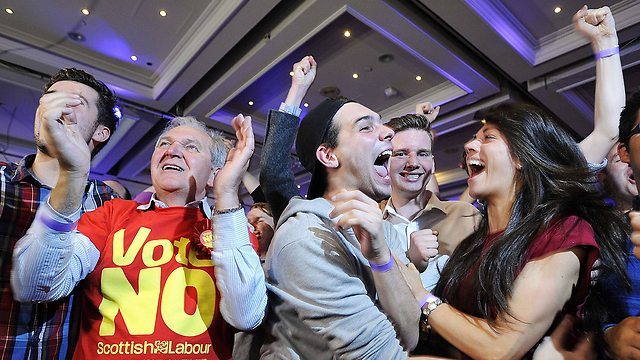 Celebrations at NO campaign in Glasgow (Photo: AFP)
Yet it divided Scots during months of campaigning, generating an unprecedented volume and intensity of public debate and participation. The Yes side, in particular, energized young people and previously disillusioned working-class voters.