Palestinian Authority President Mahmoud Abbas will arrive in New York for the United Nations General Assembly and is expected set a time limit for Israel to withdraw from the West Bank, Gaza Strip and east Jerusalem, in exchange for a peace deal.

It is the latest example of Abbas’s attempt to seek international recognition for a Palestinian state, after US-brokered peace talks failed to achieve any progress. “President Abbas has a tough mission ahead of him and he is going to be facing some serious obstacles from the United States and its allies in Europe and from Israel,” Palestinian journalist Maher Abu Khater told The Media Line. 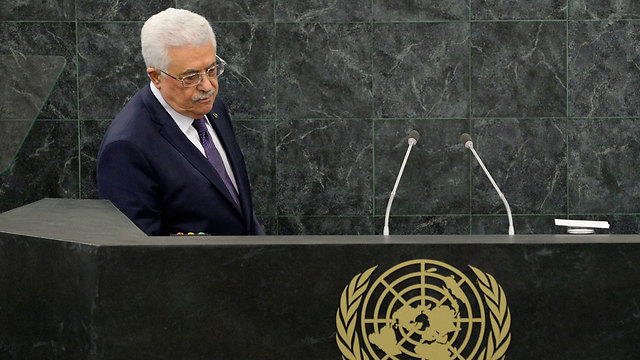 Abbas at UN General Assembly (Photo: EPA)
Since he took office in 2005, he says Abbas has become frustrated with negotiations with Israel. “His only choice is to try this new avenue, the United Nations, with the hope that he may be able to sway the vote in his favor,” he said. Earlier last week, Abbas said Palestinians would continue their resistance and struggle in all legal ways and international conventions. "We will head to the Security Council to present our cause and find a solution to our people who seek freedom and a state with east Jerusalem as its capital,” Abbas said, adding that if this fails, he plans to join all international agencies and treaties. Prior to the outbreak of this summer’s war between Israel and Hamas in Gaza, the Palestinian Authority joined 15 UN organizations, namely in a bid to get Israel held accountable for possible war crimes at the International Criminal Court (ICC). 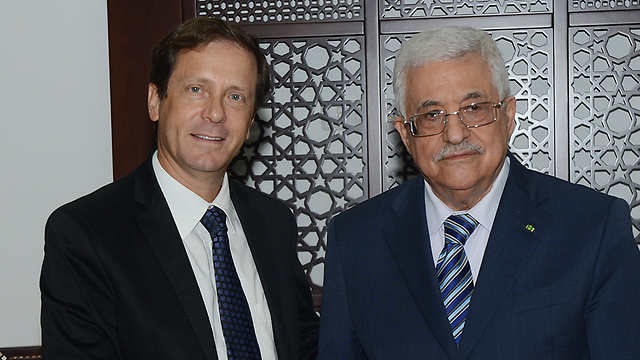 Herzog and Abbas in Ramallah
The Israeli Foreign Ministry strongly disapproves of Abbas going to the UN saying that the only way to achieve substantive progress is through bilateral talks. “A unilateral strategy of Palestinians has not brought them any results until now and there is no reason to suppose it will bring results in the future,” Israeli Foreign Ministry Spokesman Emmanuel Nahshon told The Media Line. He also says that Israel still believes peace with the Palestinians is possible. “The only way to achieve peace is through negotiation and compromise and not by evading the tough issues by going to international bodies,” he said, not elaborating on what the ‘tough issues’ are. Abbas adviser and Deputy Secretary General of the Fatah Revolutionary Council Dr. Sabri Saidam says Israel should be the last state to talk about unilateral actions. "Maintaining the longest occupation in modern times is a unilateral Israeli oppressive decision, so a unilateral reflection of dismay and wish to solicit UN support should be seen as a natural protest against decades of oppression," he wrote to The Media Line in an email. The United States has said it would use its veto in the Security Council against what is it also considers a “unilateral move.” Two years ago, the UN General Assembly granted “Palestine” the status of non-member observer state after Washington vetoed his petition at the Security Council. Journalist Abu Khater says Abbas is a deep believer in non-violence, and wants a peaceful solution with Israel.

Abbas and Netanyahu in Washington, DC (Photo: Getty Images)
“When he took office, he took a very strong stance against militants, lawlessness until he was able to restore law and order to the West Bank because Abbas knows that lawlessness is not the way to liberate Palestine,” he said. But he says he thinks Israel is becoming more of a rejectionist to peace than before because it keeps putting demands on the Palestinians that are difficult to meet. By refusing to show any flexibility on issues, like the future of Jerusalem and Israeli control of the Jordan Valley and wanting to keep its army on the borders and control airspace, he says Israel will never allow the Palestinians to have a sovereign state. “I don’t think there is much more that Abbas can do. If Israel cannot make peace with President Abbas, I’m not sure who else can make peace with it,” he said. Director of One Voice movement in Gaza, Ezzedine Masri agrees. One Voice movement is an international movement with an objective of ending the Palestinian-Israeli conflict based on the vision of two states for two peoples. “Unfortunately, he did not get his chance. He’s the best thing that’s happened to the Palestinian peace camp. We have Nelson Mandela, and the Palestinian side, but on the Israeli side, there is no Frederick De Klerk and we are waiting for that,” he said, comparing Israel to South Africa. At the same time, Abbas is unable to reassert control over Gaza, where 1.8 million Palestinians live. Gaza reconstruction will cost billions of dollars and the international community is unlikely to come up with the money if Hamas remains in control there. Abbas is finding it difficult to get Hamas to agree to disarm in order to allow his presidential guard to return to the Gaza Strip. A unity government formed earlier this year has so far failed to make any changes on the ground. While unifying the Palestinian security forces was a key item on the agenda of the consensus government, it has yet to be addressed. The lack of support the Palestinian Authority President is facing is not giving Abbas the vote of confidence he needs to take on Hamas. During the war, popularity ratings for the PA chairman dropped while Hamas’ popularity soared. Abbas was seen among many as keeping too low a profile despite his formation of a negotiations team compromised of Fatah and other parties to work out an Egyptian mediated cease-fire deal with Israel. “So unless something happens in the peace process with Israel, with declaring a Palestinian state, I think Abbas’ popularity will remain low,” said Abu Khater.

Political analyst George Jaqaman shares those sentiments, saying the PA is under a great deal of pressure from its people and therefore results in New York are a must. He talks of a “political vacuum.” The lack of talks between the sides is dangerous for the Palestinian leadership’s reputation. “It raises the question of legitimacy of the existence to administer Palestinians without gaining sovereignty,” he told The Media Line.

PLO Executive Committee Secretary General Yasser Abedrabbo told journalists this week that Palestinian unity provides political strength to break the political siege both between Hamas and Fatah, and between Israel and the PA. “There is an opportunity now, after the war. Hamas is more pragmatic than before,” he said.