Ya'alon approves addition of 200 advanced APCs for the IDF

Two months after 7 Golani soldiers were killed when an RPG hit their outdated APC in Gaza, the army is upping defensive measures for ground troops.

The IDF has received approval to add 200 new advanced armored personnel carriers to its fleet over the next decade, two months after seven Golani troops were killed when an RPG hit their outdated APC in Gaza City during the recent conflict.

The purchase of the Namer APCs for use by ground troops will bring to 531 the IDF's total number of this class of vehicle.

This is a fairly small number considering the threats Israel currently faces, and the thousands of outdated M113 Zelda APCs the army still has in its emergency depots. 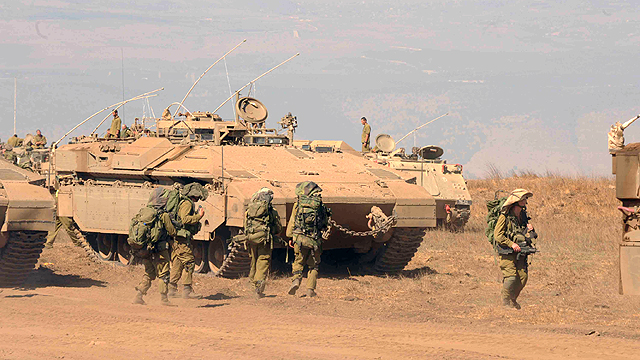 The Namer APC (Photo: Aviyahu Shapira)
IDF Chief of Staff Benny Gantz presented the APC procurement plan, formulated by Deputy Chief of Staff Gadi Eizenkot and Defense Ministry Director Dan Harel, to Ya'alon on Thursday. Most ground brigades don't have Namer APCs. The conscript ground brigades mostly move around in the heavily armored Achzarit APCs, but almost all reserve ground brigades are still using the Zelda. Some of the conscript brigades also use the Zelda for various missions - just as they did in the battle in Saja'iyya that claimed the lives of the seven soldiers.

"Those who think we could fight in Lebanon with Zeldas, against Hezbollah that is equipped with thousands of advanced anti-tank missiles, should go in themselves and fight," a senior IDF officer said.

The IDF's top brass recognizes the crisis of trust created by the APC disaster in Saja'iyya among the troops, mostly among the reserve soldiers who would have to keep using the Zeldas. The officers also clearly heard the outrage from parents whose sons had been sent into Gaza in unprotected vehicles. Over the past few years, the IDF has significantly minimized Namer APC purchases - both as a result of defense budget cuts, and out of a misguided perception the military could lean on air power and intelligence, while neglecting the ground forces. Originally, the army planned to acquire 800 Namer APCs, but only received approval for the purchase of 300, most of which remain on paper. The IDF went into Operation Protective Edge with a very limited amount of Namer APCs. The accurate number has not been cleared for publication.

Now, following the lessons learned from the operation, the planned amount was increased from 300 to 500, but the pace of armament is still slow - only 30 APCs are purchased per year. This means the armament of the 500 APCs will only conclude in 2027, and even that depends on no cuts being made to the defense budget, and on no internal decision being made that would hurt the project. 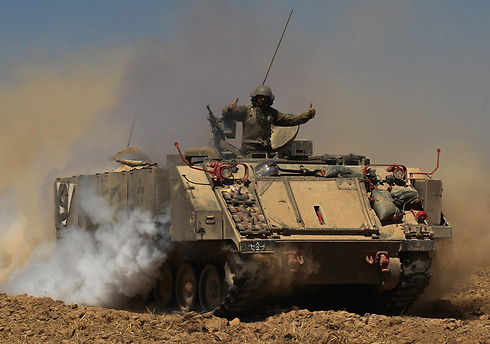 An APC used in Operation Protective Edge (Photo: EPA)
The Namer APCs are designed to deal with one of the main dangers the Ground Forces face: powerful improvised explosive devices and anti-tank missiles. After the Second Lebanon War, in which many lives were lost in the outdated M113 Bardelas APCs, Israel began to manufacture the Namer, and the first APC came off the assembly line in 2009. The Americans, who were training in one of the IDF bases, tested the Namer's endurance - they put dummies into the vehicle and drove it over a powerful explosive device. The APC went flying into the air, but the dummies were unharmed. The basic cost of one Namer APC is $3 million, and along with additional protection measures, its price reaches $5 million. It weighs about 60 tons, can reach 53kph (33mph) and has room for nine soldiers. The first to use the Namer were Golani Brigade troops who went through three weeks of training by special instructors, but Operation Protective Edge was the Namer's baptism of fire. Unlike the M113 Bardelas APC, that was hit by an RPG and caused the deaths of the seven soldiers, Namer APCs suffered several hits, none of which was able to penetrate their armor. Experts believe that had the Golani soldiers killed in Saja'iyya been in a Namer APC, their lives would've probably been saved. Another issue that must be resolved quickly is to equip the army with the Trophy defense system for tanks and Namers. During Protective Edge, this system saved 15 tanks from anti-tank missile hits, four of which with battalion commanders in them.

The price of one Trophy unit is about NIS 2 million, and it is clear that due to budgetary constraints, not all of the IDF's divisions would be equipped with it. But it is reasonable to expect the IDF's five main offensive divisions will be equipped with a significant amount of Namer APCs and Trophy systems.

In order to make that happen, the IDF will have to not only demand money from the Treasury, but also divert funds from Air Force and other military bodies for the sake of the mission.