Dakar veterans welcome new submarine where the old one sank

Arrival of Israeli Navy's new sub INS Tanin marked by special commemoration ceremony in heart of sea, at same spot where Dakar submarine went down 46 years ago, along with 69 soldiers on board.

Somewhere in the heart of the Mediterranean sea, 265 miles off the shores of Israel, the INS Eilat missile boat laid anchor on Sunday. Its commandos were scanning the blue water with their eyes over and over again, excitedly awaiting the Israeli Navy's new submarine, INS Tanin, to erupt from the depths of the sea and reveal itself for the first time.

But today's event was moving not just because of the wait for the new acquisition. Aboard INS Eilat were also three veteran commandos who served on the INS Dakar submarine, which disappeared at sea in January 1968 on its way from England to Israel. The three veterans, along with two others, were taken off the sub at the last moment, and were saved from the fate that befell their 69 comrades.
INS Tanin surfaces where INS Dakar sank (in Hebrew)    (צילום: דובר צה"ל)
X

On Sunday, right over the area where the INS Dakar disappeared, the veteran commandos were on deck to welcome the new submarine and when it breached the surface they shed a tear. "Standing at this spot, where the Dakar drowned, and seeing a new submarine coming up for air, takes us back dozens of years, and the yearning and longing returns," they said. 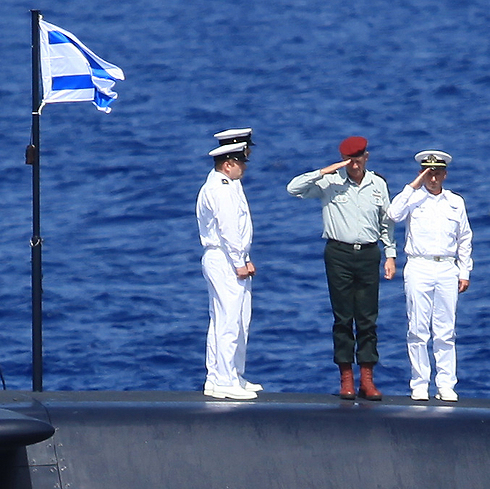 Commemoration ceremony for the fallen Dakar commandos (Photo: Roee Idan)
The welcoming ceremony for INS Tanin was weaved into the commemoration ceremony for the fallen Dakar commandos. IDF Chief of Staff Benny Gantz and Navy commander Ram Rotberg both attended the ceremony. INS Dakar's disappearance, and the mystery around it that has yet to be solved, was a tragic event that left Israelis in shock and caused a deep crisis in Shayetet 7, the Navy's submarines unit. Despite the many years that have passed, and despite the fact what was left of the submarine was recently found, the pain won't subside for the families of the fallen commandos, and for the five commandos who, at the last moment, were taken off the Dakar and reassigned to INS Dolphin, that left for Israel five days later.

The veterans who attended the ceremony were the INS Dakar's Senior Engineer Officer, Colonel (res.) Or ("Zabo") Ben-Ze'ev (69), Israel Rozen (65) and Abraham Carmel (69), who headed the electrical team aboard the Dakar. 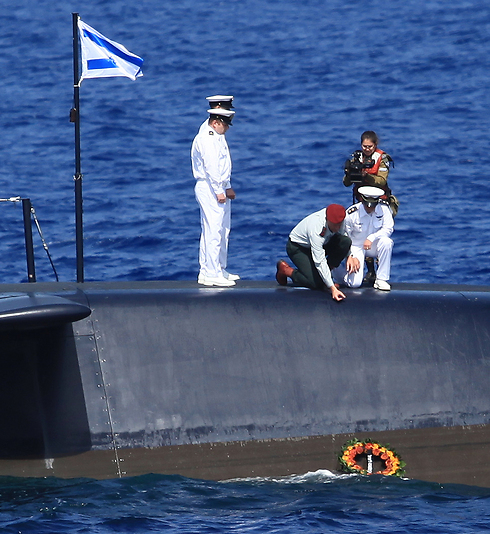 Photo: Roee Idan
Brig.-Gen. (res.) Hadar Kimchi, who was the commander of Shayetet 7 in those days, also joined the ceremony. When the INS Eilat reached the spot where the submarine disappeared, Kimchi and the three veterans dropped a heavy stone into the sea inscribed with the word "Dakar." A young Navy submarine officer, First Lieutenant R., also attended the ceremony. He is the grandson of the late INS Dakar commander, Major Ya'akov Ra'anan. "It is a great honor to stand far out at sea, where my grandfather was killed, and welcome the submarine. Even though I never knew my grandfather, I was raised with the story of the INS Dakar," First Lieutenant R. said.

Col. (res.) Ben-Ze'ev told of how he and his friends were saved at the last moment and reassigned to another submarine. 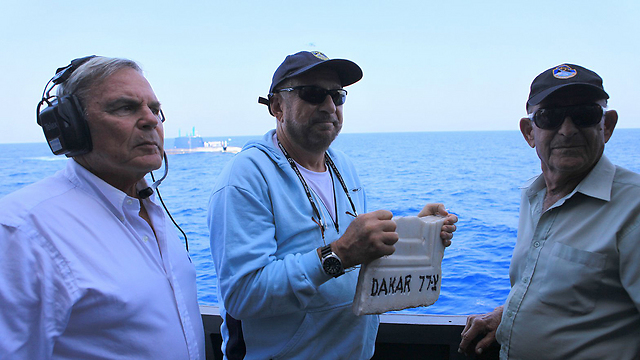 Photo: Roee Idan
"At the last moment, it was decided to acquire another submarine, INS Dolphin, and we needed a professional crew to command the journey from England. So we were borrowed for that mission and brought it to Israel," he recalled. "On the way, we heard the Dakar disappeared and all of our friends were killed. It was a great shock. We knew each of these commandos, they were like brothers to us. There was a great crisis because one third of the commandos were killed and we had almost no fighters left." At the rendezvous point, a few moments before INS Tanin rose from the depths, the chief of staff radioed its commandos to congratulate them. "We're looking forward to meeting you soon and we're excited for you to come up," he said. "The new submarine has advanced technological capabilities and could stay underwater for a long time. It's undoubtedly a strategic asset to the State of Israel," Gantz said. On Monday, residents of Haifa could get a taste of the welcoming ceremony for the new submarine. Almost 20 vessels were making their way back to the Navy base in the city and became quite an attraction. Residents stopped their cars along the shoreline to watch the impressive Navy fleet sailing past the Haifa coast.