Ahead of High Holidays, International Fellowship of Christians and Jews extends support to thousands of Jews who have fled battle zones in cities of Donetsk and Lugansk.

The International Fellowship of Christians and Jews (IFCJ) is working to provide humanitarian aid for the Jewish New Year to thousands of Ukrainian Jews who have fled their homes in the past few months following the Crimean crisis, including food and clothes supplies.

About 5,000 Jews are estimated to have fled the battle areas in the cities of Donetsk and Lugansk following the death of some of their community members, and are avoiding returning to their homes due to the Russian separatists' control of the eastern part of the country during the tense ceasefire.

"The refugees are in a very bad state," an IFCJ official explained the need to help the local Jews. "Most of them were certain that they would go back home within a month, but they haven't had an organized place to live in for three months now, nor money for food and clothes.

"The moment a person becomes a refugee, he has nothing. He has nowhere to go back to and no possibility of withdrawing money from his bank account, even if he used to be a wealthy person. Thousands of people have joined the poverty circle at once, and we are making sure that they are not forgotten."

Since the beginning of the fighting, the Fellowship has been operating a network of volunteers for smuggling Jews away from the fire zones. The organization also set up a refugee camp in the western Ukrainian city of Zhytomyr, which has taken in about 1,000 people so far. 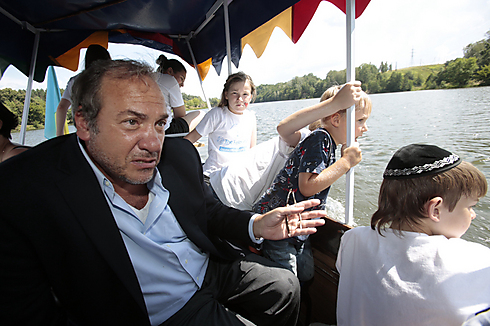 Now, the aid is being extended at an overall cost of NIS 2 million (about $550,000). Every Jewish family which has fled its home will receive a card to purchase clothes and an enlarged food parcel.

The packages will be handed out in a number of sites the refugees have escaped to across Ukraine, in cooperation with the country's Jewish communities. Eastern European clothing chain Gloria Jeans has joined the initiative and will grant every refugee a credit card which has been charged with $100 (a relatively decent sum in Ukraine). The food packages will be packed in Kiev and transferred to the refugees in Jewish centers which are not controlled by the separatists. According to the Fellowship, the routine aid offered to the country's Jewish communities has been significantly extended as part of the holiday project. A similar project taking place in Israel these days together with the H&O clothing chain offers 55,000 needy Israelis coupons for clothing and food parcels at a total cost of NIS 11 million ($3 million).

פרסום ראשון: 09.24.14, 11:02
commentsend to friendshareshare
See all talkbacks Close all talkbacks
new comment
Next
Previous
Warning:
This will delete your current comment
cancelOk