Obama at the UN: 'Too many Israelis ready to abandon peace'

US President addresses UN General Assembly: 'Status quo in the West Bank and Gaza is not sustainable'; Obama says ISIS to be destroyed by global coalition.

Amid rising tensions and developing crises across the world, US President Barack Obama addressed the UN General Assembly ministerial meeting Wednesday afternoon, saying that "too many Israelis" seem prepared to surrender to failure in the peace process with the Palestinians.

"Leadership will be necessary to address the conflict between Palestinians and Israelis," said Obama. "The violence engulfing the region today has made too many Israelis ready to abandon the hard work of peace. But let’s be clear: the status quo in the West Bank and Gaza is not sustainable."

Obama at the UN General Assembly

"We cannot afford to turn away from this effort – not when rockets are fired at innocent Israelis, or the lives of so many Palestinian children are taken from us in Gaza."

However, the President also said that, "The situation in Iraq, Syria and Libya should cure anyone of the illusion that this conflict (between Israel and the Palestinians) is the main source of problems in the region; for far too long, it has been used in part as a way to distract people from problems at home."

Declaring the world at a "crossroads between war and peace," Obama vowed to lead a coalition to dismantle the Islamic State's (ISIS) "network of death" that has wreaked havoc in the Middle East and drawn the US back into military action in the region.

Obama said the US would be a "respectful and constructive partner" in confronting the militants through force. But he also implored Middle Eastern nations to take the lead in addressing the conditions that have sparked the rise of extremists, including cutting off funding to terror groups.

"Ultimately, the task of rejecting sectarianism and extremism is a generational task - a task for the people of the Middle East themselves," Obama said. "No external power can bring about a transformation of hearts and minds." 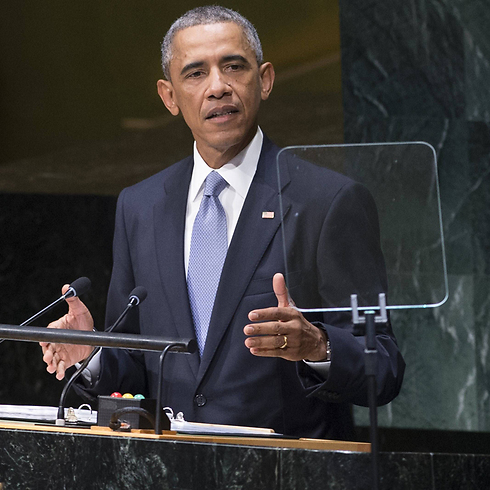 Secretary-General Ban Ki-moon opened the meeting in New York, saying that while it may seem that the world is falling apart as crises pile up, leadership is about finding "the seeds of hope" in the turmoil and despair and nurturing them.

"That is our duty," Ban said. "That is my call to you today." The secretary-general painted a grim picture of a world witnessing "unspeakable acts and the deaths of innocents," diplomacy undermined by those who believe in violence, and diversity under fire by extremists who insist their way is the only way. 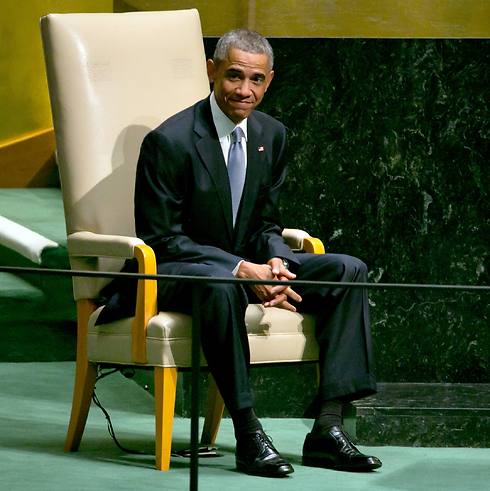 Obama moments before his speech at the General Assembly. (Photo: AP)

Meanwhile, the US military on Wednesday confirmed it had launched five more airstrikes targeting Islamic State militants in Syria and Iraq in the latest round of attacks on the militant group.

One strike hit Syria northwest of the Iraqi city of Al Qa'im, US Central Command said in a statement. Two strikes hit were west of Baghdad and two southeast of Irbil in Iraq. The latest strikes on Tuesday and Wednesday destroyed two Islamic State armed vehicles, eight other vehicles, a weapons cache and fighting positions, the statement said. Various attack, bomber and fighter aircraft were used in the airstrikes and all aircraft were able to leave the area safely, according to the statement.