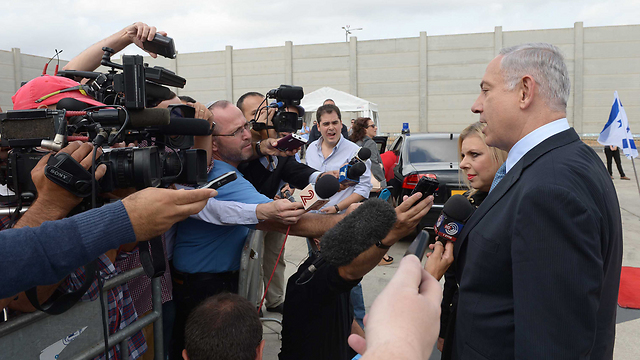 Prime Minister Netanyahu (Photo: Avi Ohayon, GPO)
Netanyahu was due to address the General Assembly on Monday, three days after Abbas told the delegates that Israel had committed genocide in Gaza. Before leaving, the prime minister vowed to "tell the truth of Israel's citizens to the entire world."

"In my UN General Assembly speech and in all of my meetings I will represent the citizens of Israel and will – on their behalf – refute the slander and lies directed at our country," Netanyahu said.

The prime minister was to begin his visit on Sunday in a meeting with Indian Prime Minister Narendra Modi. This meeting marks the first between prime ministers of Israel and India time in over a decade.

On Tuesday, Netanyahu was to meet with UN Secretary-General Ban Ki-moon, followed Wednesday by a meeting with US President Barack Obama.

While Rouhani only mentioned Israel once in his speech, saying that "Had we had greater cooperation and coordination in the Middle East, thousands of innocent Palestinians in Gaza would not have been fallen victim to Zionist regime's aggression," Abbas dedicated the lion's share of his speech to Israel.

In the speech, Abbas called the previous round of fighting against Gaza "a series of absolute war crimes carried out before the eyes and ears of the entire world, moment by moment." The devastation unleashed, he asserted, "is unmatched in modern times."

He further stated that "the Israeli government undermined chances for peace throughout the months of negotiations," referring to the failed 9-month-long peace process undertaken before the latest violence in Gaza. "Israel has consistently sought to fragment our land and our unity."

Senior officials in Prime Minister Benjamin Netanyahu's office denounced the allegations as "a speech of incitement filled with lies."

The foreign minister said that, "Abbas complements Hamas in his political terrorism and storytelling against Israel. So long as he's chairman of the Palestinian Authority, Abbas will lead to the continuation of the conflict. He has proved time and again that he is not a man of peace, but rather (Yasser) Arafat's heir."