Prime Minister Netanyahu on his way to the US
Photo: Avi Ohayon, GPO

During his UN speech, prime minister reiterates Israeli position Iran must not be allowed to obtain nuclear bomb: 'Would you let ISIS enrich uranium or develop IBMs? Then you can't let Iran either.'

Defeating the Islamic State, but leaving Iran with a nuclear bomb would be akin to winning the battle but losing the war, Prime Minister Benjamin Netanyahu said Monday in his speech at the UN General Assembly.

"Hamas' immediate goal is to destroy Israel but has a wider goal the same as ISIS," the prime minister said. "ISIS and Hamas are branches of the same poisonous tree. When it comes to their ultimate goals: Hamas is ISIS and ISIS is Hamas."

Hamas, Islamic State, Hezbollah and other militant Islam organizations "all share a fanatic ideology. They seek to create ever expanding enclaves of militant Islam. Where there is no freedom or tolerance," Netanyahu warned. 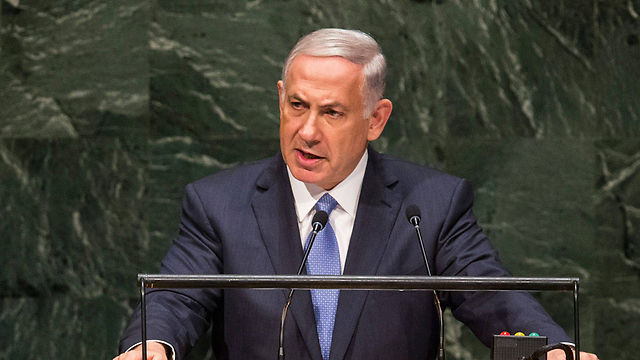 Netanyahu at the UN: 'Hamas has the same goal as ISIS' (Photo: AFP)

"It's one thing to confront militant Islamists in a pickup truck with a rifle, another thing when they have weapons of mass destruction," he said. "Would you let ISIS enrich uranium or develop intercontinental ballistic missiles? Then you can't let Iran either."

"To defeat ISIS and to leave Iran as a threshold nuclear power is to win the battle and lose the war," Netanyahu added. 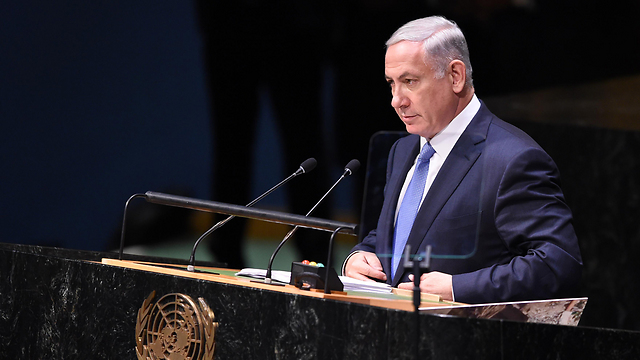 "Don't be fooled by Iran's manipulative charm offensive," he cautioned. "It's designed for one purpose only: To lift the sanctions and remove the obstacles on Iran's path to the bomb."

"Allowing that to happen would be a grave danger to our common future. Once Iran produces atomic bombs the charm and smiles will disappear," he continued.

Netanyahu enjoyed applause when the assembly hall when he reiterated Israel's position that "Iran's nuclear capabilities must be fully dismantled."

Turning his attention back to the fight against Hamas and Operation Protective Edge, the prime minister asked the congregated delegates "What would your countries do if thousands of rockets were fired at your cities?"

"You wouldn't let terrorists fire rockets at your cities with impunity," Netanyahu said, answering his own question.

"Israel justly defended itself against both rocket attacks and terror tunnels," he said.

He also responded to accusations from Palestinian Authority President Mahmoud Abbas, in his own UN speech, that Israel had committed "genocide" in Gaza during Operation Protective Edge.

"We did not deliberately target civilians in Gaza and we regret every civilian casualty," Netanyahu said. "No other country and no other army in history has gone to greater lengths to avoid casualties among the civilian population of their enemy. Our soldiers uphold the highest moral values of any army in the world - they should be admired not condemned."

Hamas, on the other hand, "was doing everything it could to target civilian lives," he said. 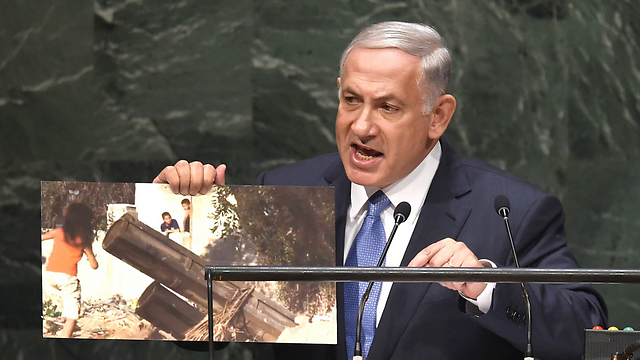 "Hamas deliberately placed its rockets where Palestinian children lived and played," Netanyahu continued, pulling out a photo from a France 24 report during the war, showing Gazan children playing near a rocket launcher. "These are the real war crimes," he said.

He censured the UN Human Rights Council as well, criticizing them for their hypocrisy in condemning Israel for its actions while "sending a message to terrorists everywhere: use children as human shields." 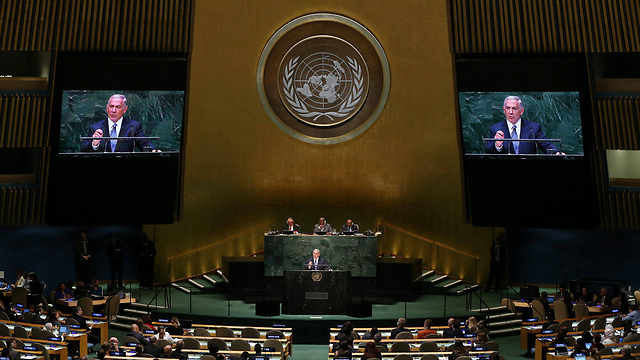 According to Netanyahu, the UN Human Rights Council's "bias against Israel" is a new form of anti-Semitism.

'I'm willing to make a compromise'

The prime minister saved the topic of the Israeli-Palestinian peace negoations, halted in April, for last.
"I am ready to make a historic compromise," he said.
"A broader rapprochement between Israel and the Arab world may help facilitate Israeli-Palestinian peace," Netanyahu said. "Israel is prepared to work with Arab partners to confront dangers and seize opportunities."
The Arab peace initiative, however, "should be updated according to current realities."
"In any peace agreement I will always insist that Israel be able to defend itself by itself," the prime minister stressed. "Some may still not take Israel's security concerns seriously. Make no mistake. But I do and I always will."
Netanyahu concluded his speech by quoting Prophet Isaiah: "For the sake of Zion, I will not be silent. For the sake of Jerusalem, I will not be still."

"Let us light a torch of truth and justice to safeguard our common future."