Israel's clandestine backchannel with the Palestinians exposed: Sides working on plan to boost coordination and cooperation, in parallel to official Cairo talks.

A senior Israeli official met Tuesday with Palestinian Prime Minister Rami Hamdallah in the West Bank city of Ramallah to discuss mutual cooperation and the rehabilitation of Gaza, senior sources from both Israel and the Palestinian Authority have confirmed to Ynet.

While Prime Minister Benjamin Netanyahu and Palestinian President Mahmoud Abbas have been trading verbal blows from the podium at the UN General Assembly, it seems that, behind the scenes and far from the public eye, Israeli and Palestinian officials are working to hatch out a political plan to tighten coordination and cooperation between the two sides.

This secret backchannel of communications puts senior Israeli officials in contact with Hamdallah, and runs in parallel to indirect talks in Cairo between Israel and Hamas and other Gaza terror factions. Israel and Palestinians agreed last Tuesday to resume talks late next month on cementing a Gaza ceasefire, allowing time for Palestinian factions to resolve their divisions. 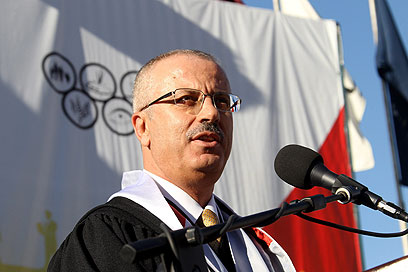 Palestinian Prime Minister Rami Hamdallah (Photo: EPA)
A senior official within the Palestinian Authority has told Ynet that the Israeli official met with Hamdallah on Tuesday evening, and the two discussed ways in which Israel can alleviate the suffering of Gazans in wake of the Operation Protective Edge. A senior Israeli political official confirmed the report, telling Ynet that the talks were "coordination intended to change the situation on the ground." "The talks are not suppose to bring about a peace deal and solve the conflict, but are something happening in addition to truce talks in Cairo," the official said. "The goal is to make sure that there is oversight about what is happening in Gaza, and that can be done either with the UN or the Palestinian Authority. For the PA to do that, we need to coordinate our moves and change the situation on the ground for regular Gazans. The goal is to solidify the ceasefire." The Ramallah meeting highlights the fact that communication between Israel and the Palestinians is conducted on two levels: The public, albeit indirect, channel in Cairo, mediated by the Egyptians and led by Fatah official Azzam al-Ahmed, in which Hamas is also a partner; and the secret channel, revealed here for the first time.

Fifty days of conflict between Hamas and Israel left swathes of Gaza devastated. According to the Gaza Health Ministry, more than 2,100 Palestinians, most of them civilians, were killed in the fighting. Sixty-seven IDF soldiers and six Israeli civilians were also killed.

Among the issues being discussed are dramatic changes in Israel's restrictions on Gaza, the majority of which were imposed after Hamas violently seized control of the Strip in 2007.

The two central issues the sides discussed in the meeting– both of which are of the utmost importance for Gaza's residents – are permitting men over 60 to enter Jerusalem for religious services during the Muslim holy days, and allowing Gaza-made produce and goods (namely, fish) to be exported to the West Bank.

Another issue being negotiated is easing some of the restrictions barring young Gazans from attending West Bank universities or even studying abroad.

Other restriction-alleviating measures that were willingly conceded by Israel have already been made public, such as an increase the number of merchants allowed to travel from Gaza to the West Bank to 200 a day; raising the age limit of Gazans allowed to visit family outside of the Strip to 16; and permitting humanitarian visits for grandparents.

In the meantime, in Cairo, the delegations are working on the toughest issue of all – the border crossings between Israel and Gaza (as well as Gaza and Egypt) and who oversees them. The possibility that goods made in Gaza will be exported abroad is also being discussed.

The Palestinian unity government, a technical government of bureaucrats set up by Hamas and Fatah to oversee an election, is viewed as instrumental in both talks.

Last week, prior to the Israeli delegation joining the Cairo talks, Hamas agreed to concede control of the Strip to the unity government, a move which unites both Palestinian territories under the international recognized Palestinian Authority and sets the stage for Gaza's rehabilitation. With the PA overseeing the border crossings, the need for widespread coordination with the Palestinian unity government, which Hamdallah leads, becomes pertinent – even if it cannot be openly discussed for political reasons.

Last week, a senior Hamas official said the Palestinians had agreed that some 3,000 Palestinian security forces - loyal to the Palestinian Authority and not Hamas - will be deployed in the Strip for the first time since 2007, when Hamas violently ousted Fatah and PA officials from positions of power. Their deployment, and the overall running of Gaza, will be supervised by a third country that will work with the PA.

Israeli officials attempted to downplay Tuesday's meeting, saying it was part of Israel's regular coordination efforts with the PA ahead of the Muslim holy days. This year, the Muslim festival of Eid al-Adha (the Feast of the Sacrifice) coincides with Yom Kippur.