Tens of thousands of youths protest on the streets of Hong Kong, demanding leader Leung to sign and for China to hold fully democratic elections.

Tens of thousands of people have swarmed the streets of Hong Kong on Thursday night, demanding he city's leader Leung Chun-ying to resign by the end of the day, and want China to introduce full democracy so the city can freely choose its own leader. 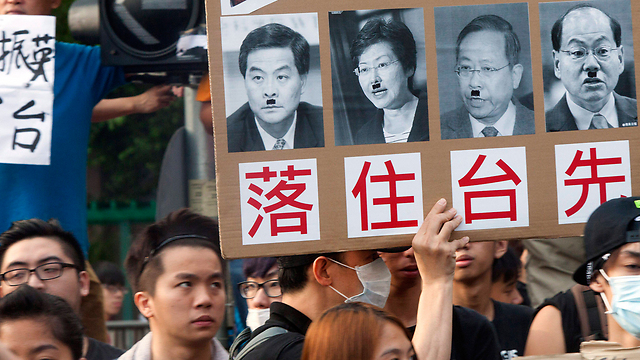 Hong Kong protesters hold up photos of leaders with Hitler-like moustache (Photo: EPA)
They have threatened to escalate their struggle should Leung fail to resign by occupying government buildings. Hong Kong police, on their part, promised to respond firmly to such action. "Whenever there are violent and major incidents and crimes such as fighting and any other situation that jeopardizes safety and public order, police will take resolute and firm action to restore public order," said Steve Hui, senior superintendent of the Hong Kong police force.

"The Hong Kong police force is one of the most efficient," Rabbi Avtzon said. "The protests have been very disruptive since many other neighborhoods feed into the Central District, and but they have not been violent, per se, and we’ve not seen shooting or looting." 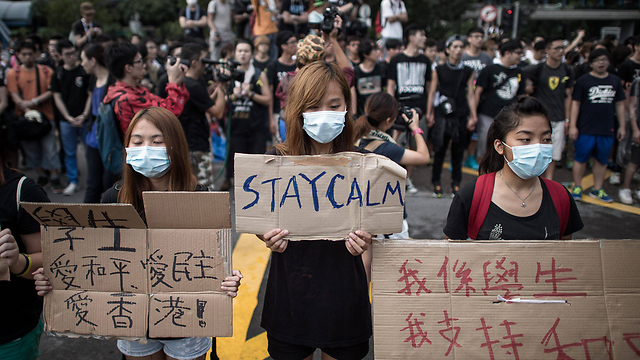 Rabbi Avtzon said he believed things calm down soon and life returns to normal. "I cannot categorically promise that we will not have additional problems to pray for this Yom Kippur, but there are no indicators of a major crisis looming," he said.

Meanwhile, the Israeli Foreign Ministry has issued a travel warning for Hong Kong, advising Israelis in the city to avoid areas where mass protests and clashes with the police are taking place.

Riot police used tear gas, pepper spray and baton charges last weekend to quell unrest, the worst in Hong Kong since China resumed its rule of the former British colony in 1997. The "Occupy Central" movement presents one of the biggest political challenges for Beijing since it violently crushed pro-democracy protests in Tiananmen Square in 1989. Universal suffrage is an eventual goal under the "one country, two systems" formula by which China rules Hong Kong. Under that formula, China accords Hong Kong some autonomy and freedoms not enjoyed in mainland China. However, protesters calling for free elections reacted angrily when Beijing decreed on Aug. 31 that it would vet candidates wishing to run in Hong Kong's 2017 election. Protesters across the city have dug in, setting up supply stations with water bottles, fruit, raincoats, towels, goggles, face masks, tents and umbrellas.

China has dismissed the pro-democracy protests as illegal, but it faces a dilemma.

Cracking down too hard could shake confidence in market-driven Hong Kong, which has a separate legal system from the rest of China. Not reacting firmly enough, however, could embolden dissidents on the mainland.