Israel to send aid to Africa to combat Ebola

After Defense Minister rejected request by US, UN to send field hospitals to Africa, Foreign Ministry announces it will send three mobile emergency clinics to area with Israeli medical crews.

After Defense Minister Moshe Ya'alon rejected a special request by the US and UN to send IDF field hospitals to Ebola hit Liberia and Sierra Leone, the Foreign Ministry announced on Sunday its intention to send three mobile emergency clinics to areas in West Africa where there is a risk of infection with the virus.

A statement issued by the Foreign Ministry said: "The clinics, which were manufactured in Israel, were built in accordance with standards and guidelines of the World Health Organization for the treatment of Ebola.

"A staff of medical experts will be attached to each clinic, and they will train the local practitioners in the operation of the clinic and its equipment. In addition, staff training will focus on preventing the spread of the disease and raising awareness among populations with high potential for infection. " 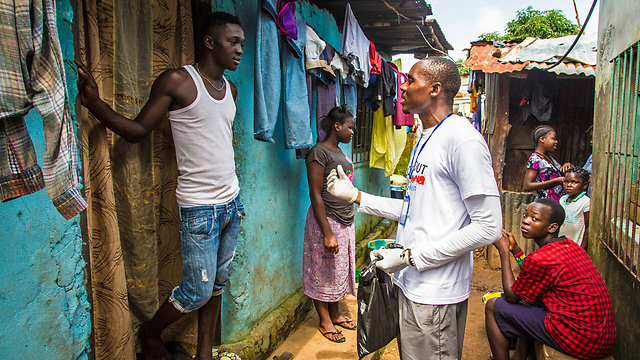 Earlier this week, Defense Minister Moshe Ya'alon announced that Israel decided not to send medical crews or set up field hospitals in Africa. citing the threat of infection to Israeli medical teams in explaining his decision.

The request was lodged by the UN and US, and was passed onto Israel though US Ambassador to the UN Samantha Power and Ron Prosor, Israel's envoy.

The Foreign Ministry recommended the Defense Ministry respond positively to the American's request, even though it was a complex mission, which runs the risk of infection for medical crews, who would have been forced to wear full NBC suits.

The deadly epidemic has killed more than 3,400 people since it began in West Africa in March and has now started to spread faster, infecting almost 7,200 people so far. Nigeria, Senegal and now the United States – where the first case was diagnosed on Tuesday in a man who flew in from Liberia – have all seen people carrying the Ebola haemorrhagic fever virus, apparently unwittingly, arrive on their shores.

France is among countries most likely to be hit next because the worst affected countries – Guinea, Sierra Leone and Liberia – are French-speaking and have busy travel routes back, while Britain's Heathrow is one of the world's biggest travel hubs.

France and Britain have each treated one national who was brought home with the disease and then cured. The scientists' study suggests that more may bring it to Europe not knowing they are infected.