Hezbollah clashed with hundreds of Sunni Islamist insurgents trying to capture land in a mountainous area near the border with Syria on Sunday and both sides suffered casualties, security sources said, as the al-Qaeda linked Nusra Front made gains near the border with Israel.

The insurgents clashing with Hezbollah, linked to the militant group Islamic State and al-Qaeda's Syria wing - the Nusra Front - launched a major offensive on Hezbollah-controlled areas near the Lebanese border town of Arsal, the sources said. Hezbollah had called on fighters to mobilize to defend the area, they added.

Meanwhile, the al-Qaeda linked Syrian rebel group said Sunday it has managed to take over a strategic area on the outskirts of Quneitra, not far from the border with Israel, in southern Syria. 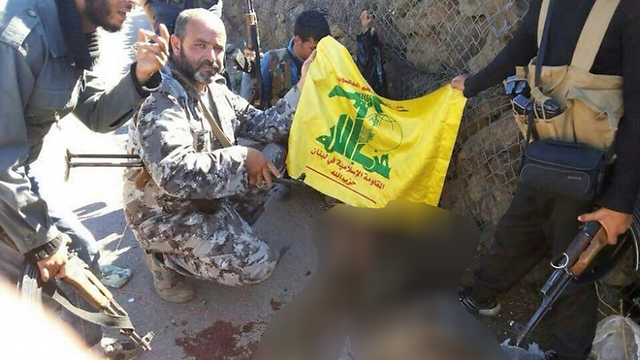 Hezbollah soldiers near the dead body of an armed militant

The Nusra Front, said it captured the Al-Harra area along with other rebel groups. The news came as US-led airstrikes targeted forces affiliated with the Islamic State group in eastern Syria, highlighting the wide scope of the Syrian conflict.

In recent months the Quneitra area has been scene to massive clashes between the Syrian regime and rebel groups. 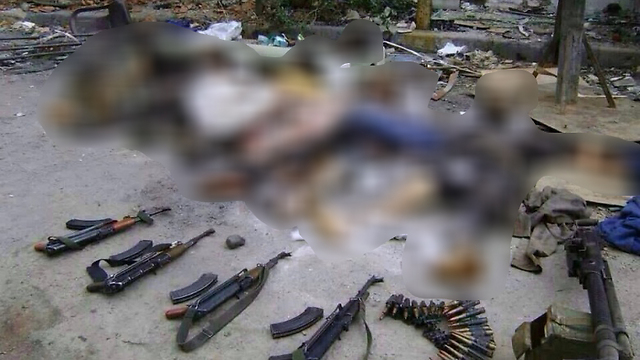 According to Syrian opposition officials, the al-Qaeda-linked group's takeover of the area essentially opens up the most important routes connecting the western and northern outskirts of Daraa and the southern outskirts of Quneitra. 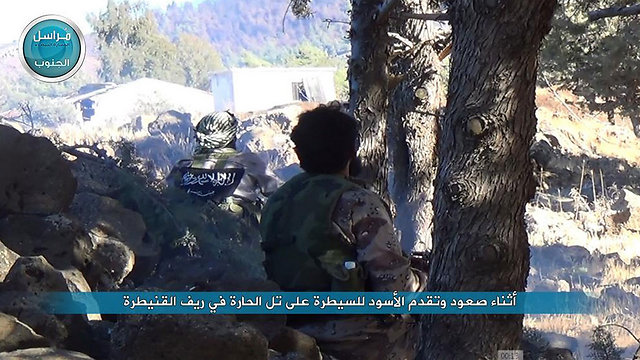 Jabhat a-Nusra militants in Quneitra (Photo taken from Twitter)
The New York Times quoted a senior IDF official who said Israel's main concern was upholding the 1974 ceasefire agreement with Syria, "if there’s no sovereign military on the other side." "Now we're planning for a different type of threat. The terror and Islamic extremist threat," he said.

The IDF would not provide details on spillover of fire from the Syrian Golan to the Israeli side, but noted there were less than 100 such cases.

Meanwhile, at least 16 Sunni Muslim insurgents from the Nusra Front were killed in clashes with fighters from Hezbollah in eastern Lebanon on Sunday, a source close to Hezbollah said.

"There are at least 16 dead from Nusra Front," the source said, adding that Hezbollah fighters from other parts of Lebanon had gone to defend the area. 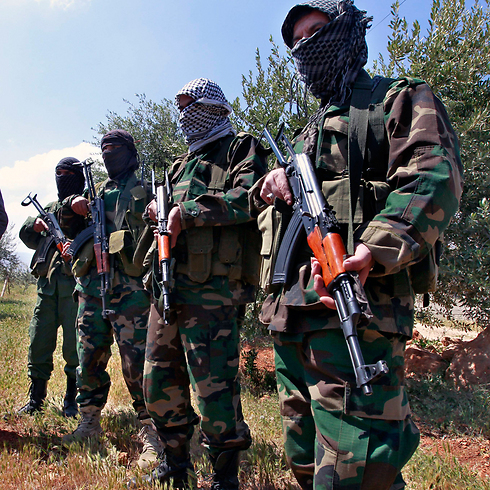 Hezbollah clashed with rebels from the Islamic State group and the Nusra Front trying to capture land in a near the border between Syria and Lebanon, and both sides suffered casualties, sources said.

The Sunni insurgents see Iran-backed Hezbollah among their chief foes. Fighters from the Lebanese group have been aiding President Bashar Assad in the Syrian civil war, fighting groups such as al Qaeda's Nusra Front and Islamic State which has seized tracts of land in Syria and Iraq.

Two Hezbollah fighters were killed and at least eight of the insurgents, the sources added. Violence from Syria has often spread into Arsal and surrounding areas, where the Lebanese army has also battled insurgents.

Fighters from Iran-backed Hezbollah have been aiding Syrian President Bashar Assad in the Syrian civil war, fighting groups such as Islamic State and al Qaeda's Nusra Front. Islamic State has seized tracts of land in Syria and Iraq.

In August Islamic State and Nusra Front fighters stormed Arsal in the worst spillover of Syria's war into its neighbour to date, killing and capturing members of the Lebanese military. They have since killed at least three of the captive soldiers.