Warplanes believed to have been sent by the US. led coalition struck positions held by Islamic State militants near a Syrian border that beleaguered Kurdish forces have been struggling to defend.

The airstrikes on Tuesday came after fighters from the extremist group managed to enter some neighborhoods of Kobani, a strategic town near the Turkish border. Journalists on the Turkish side of the border heard the sound of warplanes before two large plumes of smoke billowed just west of Kobani. 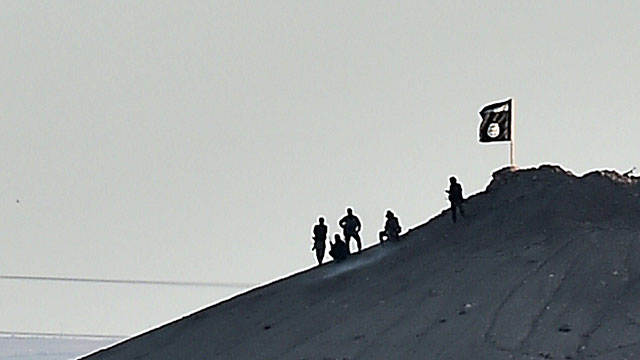 The US-led coalition has launched several airstrikes over the past two weeks near Kobani in a bid to help Kurdish forces defend the town, but the strikes appear to have done little to slow the Islamic State offensive.

Islamic State fighters advanced into the south west of Kobani overnight, a monitoring group said on Tuesday, taking several buildings to gain attacking positions from two sides of the city. From across the nearby Turkish border two Islamic State flags could be seen flying over the eastern side of Kobani. Two air strikes hit the area and sporadic gunfire could be heard. 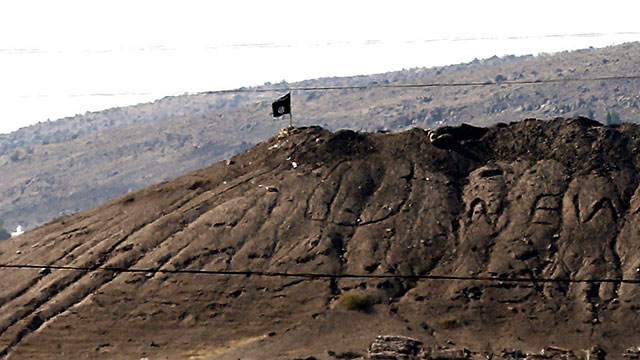 Photo: AFP
Islamic State fighters were using heavy weapons and shells to hit Kobani, senior Kurdish official Asya Abdullah told Reuters from inside the town, which has been under siege for three weeks. "Yesterday there was a violent clash. We have fought hard to keep them out of the town," she said by telephone. "The clashes are not in the whole of Kobani, but in specific areas, on the outskirts and towards the centre." The al-Qaeda offshoot has ramped up its offensive in recent days against the mainly Kurdish border town, despite being targeted by US-led coalition led air strikes aimed at halting its progress. 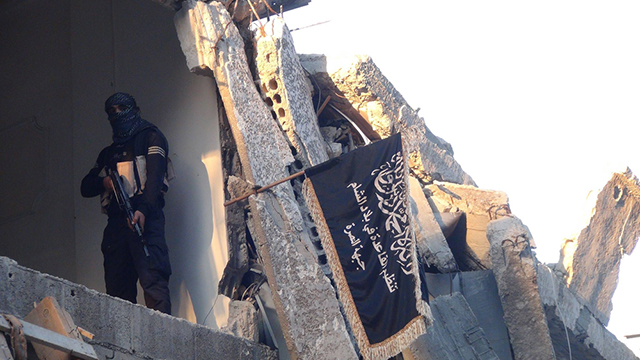 Islamic State force in Syria (Photo: AFP)
The group wants to take Kobani to consolidate a dramatic sweep across northern Iraq and Syria, in the name of an absolutist version of Sunni Islam, that has sent shockwaves through the Middle East. "There were clashes overnight. Not heavy but ISIS is going forward from the southwest. They have crossed into Kobani and control some buildings in the city there," said Rami Abdulrahman, head of the Syrian Observatory for Human Rights, a group that monitors the conflict with a network on the ground. ISIS is a former name for Islamic State. "They are about 50 metres inside the southwest of the city," Abdulrahman said. An estimated 180,000 people have fled into Turkey from the Kobani region following the Islamic State advance. More than 2,000 Syrian Kurds including women and children were evacuated from the town after the latest fighting, a member of the Kurdish Democratic Union Party (PYD) said on Monday. Before the offensive, Kobani, known as Ayn al-Arab in Arabic, was home to refugees from the civil war which pits rebels against President Bashar Assad and has deteriorated into hundreds of localized battles between different factions. The most powerful of the myriad militias fighting against Assad, Islamic State has boosted its forces with foreign fighters and defectors from other rebel groups. It gained additional heavy weaponry after its fighters swept through northern Iraq in June, seizing arms from the fleeing Iraqi army. The group released a video showing dozens of men said to be from Ahrar al-Sham, a rival Islamist group which has clashed with it in the past, pledging allegiance to its leader Abu Bakr al-Baghdadi, SITE monitoring service said on Monday. Meanwhile, the brother of a British aid worker who was beheaded by Islamic State said Britain should put troops on the ground in the Middle East to fight against the militants. "We need to send ground troops in or forces in to find out where these monsters are and bring them to justice," said Reg Henning, whose 47-year-old brother Alan was killed last week. "The sooner we do it, the sooner the killing stops." "Go and find them, bring them to justice, bring them over here, let us try them," he was quoted as saying on the BBC website.