Despite Health Ministry's rejection of treatments aimed at changing religious gays' sexual orientation, Rabbi Shlomo Aviner says men who have undergone such therapy are 'happy, love their wives and have good, normative families.'

Rabbi Shlomo Aviner, one of the prominent supporters of conversion therapy aimed at changing a religious homosexuals' sexual orientation to heterosexual, is unconvinced by the Health Ministry's stand against these psychological treatments.

According to Rabbi Aviner, the reality on the ground proves that conversion therapy is efficient and that men who have undergone such treatment are "happy, love their wives and have children and good, normative families.

"In the United States it's carried out in huge volumes of thousands, who gather for a very big, joyful conference," the rabbi described the success. "In Israel there are of course much fewer residents, but we are personally familiar with hundreds of people who have undergone these treatments successfully."

Rabbi Aviner stressed that the Atzat Nefesh organization, which he supports, will continue to send homosexuals to conversion therapy conducted by professionals in a lawful manner. He added that unauthorized therapists were one of the reasons for failed treatments.

'We only help those who want it'

According to the rabbi, the Israel Psychological Association's position paper against gay conversion therapy was "not so negative."

He said he met with one of the people who drafted the document and understood from him that "it doesn't bring the treatments to an end, it only says that we have to be careful. That's very true, like with everything else. One must be careful with any psychological treatment. It's no different from other treatments." 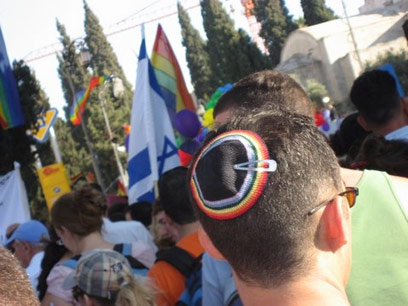 Heath Ministry's decision met with mixed reactions from different organizations representing religious homosexuals (Photo: Amit Lev)
As for Health Minister Yael German's claim that a sexual inclination is innate and cannot be changed, the rabbi said: "We are all born with certain impulses. What can we do? If we say that they are unchangeable, and let every person with a certain trait act according to it, we will erase the person's entire moral duty. We will erase morality." Rabbi Aviner stressed that "not all psychological methods do something about it. There are certain methods, and we are using reparative therapy, which says that it's not innate but rather the result of a psychological complexity from one's home." In any event, he clarified, Atzat Nefesh is "an assistance and guidance line, and directs people according to accumulated experience." According to the rabbi, "Only those who want to undergo therapy. We help people. We don't want anything from anyone, and there are long queues."

The Heath Ministry's decision was met with mixed reactions from the different organizations representing religious homosexuals.

Rabbi Ron Yosef, who heads the Hod organization (an acronym for religious gays in Hebrew), defined the decision as "a day of celebration," but expressed his concern over "many young men and teenagers who are still suffering under the hands of therapists, most of whom are not authorized professionals. "Nonetheless," he clarified, "the Health Ministry led by Minister German is joining a series of mental health organizations in Israel and the world, which are rejecting the conversion treatments as a legitimate practice and exposing the lie some of the rabbis and leaders of the religious public are telling the public." The Kamoha – Orthodox Homosexuals organization defined the health minister's remarks as "inaccurate, to say the least." According to an organization official, "Anyone who reads the conclusions of the Israel Psychological Association's position paper understands that there are no clear conclusions here, but only an indication. "The empirical research is still vague, and there is definitely no room for declarations like the one made by the minister, that 'sexual inclination is not something which must or should be changed.'" The official added that Kamoha "recognizes the right of those who are interested in psychological treatment for their sexual inclination to implement this option of therapy, while recognizing the fact that it does not guarantee a change and that the process, its results and its success rate have not been sufficiently proven yet." According to the official, "Kamoha has launched a foundation which subsidizes psychological treatments for those interested in finding out whether they can indeed shift their attraction to women or are incapable of doing so. "It should be noted that the foundation does not direct people to psychologists who are convinced that the therapy is always helpful, because such a narrow view could damage the patient. The foundation directs people to professional psychologists who understand the complexity of the issue and identify with the association's perception."

The Havruta organization for religious homosexuals in Israel welcomed the Health Ministry's decision to adopt the position paper against conversion therapy, but stated that "such 'treatments' should be outlawed, as they have been in the United States.

"As part of our approach, we respect the individual's desire – if he has indeed chosen to do so – to try out different treatments for changing his sexual inclination. Nonetheless, we see it fit to stress and warn that many of our members are carrying mental scars as a result of those 'treatments,' especially those conducted as part of the Atzat Nefesh organization. "Among the hundreds of Havruta members, not a single person has succeeded in changing his sexual orientation, although many of us have strongly fought our sexual inclination in the past." The organization clarified that "the evidence about a certain success rate is not based on any scientific figure. Those who suggest that our members try out 'conversion therapy' are paving a path of torture for them, only to find out what we at Havruta already know: It's simply impossible. "Another possible result is the complex reality of associations of married religious homosexuals, who connect with each other behind their wives' backs."

The organization added in a statement that it believes there is nothing wrong with religious homosexuals. "We were created in the image of God like any other person and our inclination is not something which is against Jewish Law, but is something the religious society has yet to understand how to deal with.

"Moreover, suppressing our sexual inclination has created sad and sick families, depressed women and men walking around with a feeling that they have sinned."

Liron Nagler-Cohen contributed to this report.