UNITED NATIONS - Syria has declared four chemical weapons facilities it hadn't mentioned before, a special representative of the UN secretary-general told the Security Council on Tuesday. The news heightened concerns that the Syrian government hasn't been fully open about its chemical weapons program.

Diplomats said Sigrid Kaag told them during closed consultations that three of the facilities are for research and development and one is for production, and that no new chemical agents have been associated with the four sites.

The US ambassador to the UN, Samantha Power, tweeted: "Must keep pressure on regime so it doesn't hide CW capability."

A joint mission between the UN and the Organization for the Prohibition of Chemical Weapons was tasked last year with eliminating Syria's chemical weapons program after the Security Council found rare agreement on Syria. The deal was reached under threat of US airstrikes after images of civilian victims laid out after an attack on a Damascus suburb shocked the world. President Bashar Assad's government denied involvement and blamed rebel groups. The joint UN-OPCW mission has said all 1,300 tons of declared chemical weapons have been removed, and attention now turns to destroying Syria's chemical weapon facilities.

Concerns remain that Syria has not made a full declaration of its chemical weapons. The United States has said it is worried that the Islamic State group, which has seized large parts of Syria, and other terrorist groups could get hold of chemical weapons if Syria is hiding any stockpiles. 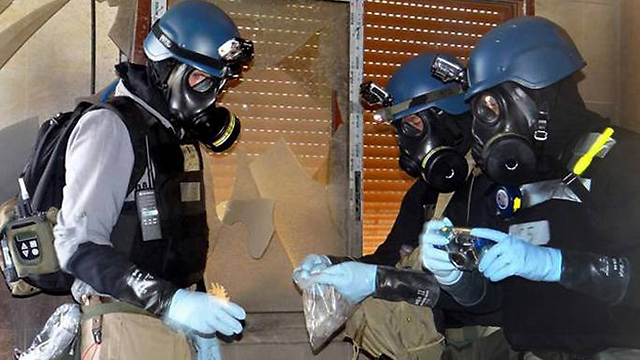 UN inspectors in Syria (Photo: AP)
The OPCW has said the dismantling of Syria's chemical weapons facilities is expected to begin this month, and the first of the 12 facilities should be destroyed by the end of November. The global chemical weapons watchdog also has said it is still working with the government to resolve discrepancies in its chemical weapons declaration. Kaag also told diplomats Tuesday that an OPCW fact-finding mission found chlorine had been used "systematically and repeatedly" in attacks as recently as August, Power tweeted.

Lithuania's mission to the UN tweeted: "Connect the dots: @OPCW sure chlorine used in #Syria, witnesses saw it dropped by helicopters, which only Assad has. Who's responsible?" 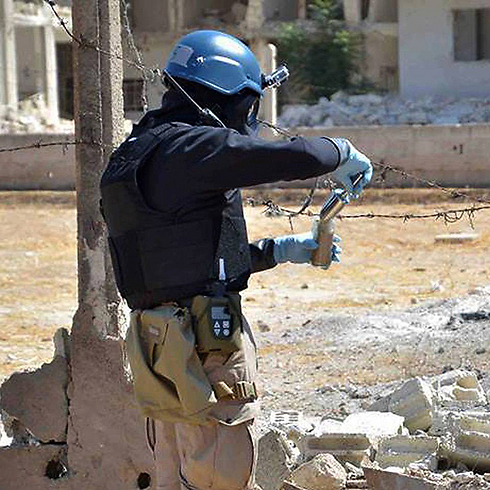 UN inspector near Damascus (Photo: AP)
The fact-finding mission last month said it was virtually certain chlorine had been used as a chemical weapon in northern Syria this year. The mission did not assign blame, but British Foreign Secretary Philip Hammond said its findings "corroborate allegations that the Assad regime is continuing to use chemical weapons in Syria, in violation of the Chemical Weapons Convention." Both sides in Syria's conflict, now in its fourth year, have blamed one another for using chlorine and other chemical weapons. The fighting has killed more than 190,000 people and sent millions fleeing into neighboring countries. The UN's mandate for the joint mission with the OPCW ended Sept. 30, and the OPCW will handle work from now on.