Dozens of veiled rioters hurled stones and fireworks at police officers Wednesday morning on the Temple Mount. A police force entered the compound and pushed the assailants back into the Al-Aqsa Mosque complex; four officers were wounded and were treated by medics on location.

Five rioters were arrested. Police and Palestinian sources said the clashes were premeditated – a group of Palestinians had spent the night at the compound in order to intensify the tense atmosphere in the morning hours.

The rioters barricaded parts of the compound and doused the barricades with flammable liquids. They threw rocks and cinder blocks towards police from within the Al-Aqsa Mosque; they fired fireworks and even hurled a Molotov cocktail, which smashed against a police officer's shield but did not ignite. 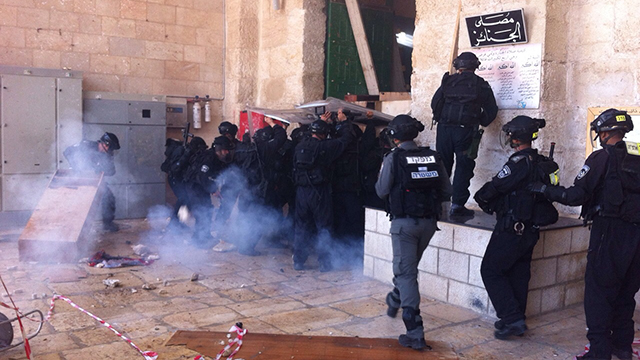 A police force under the command of the district commander, Maj. Gen. Yossi Fraynti, worked under a barrage of stones, fireworks, metal rods, and Molotov cocktails in order to remove the barricades placed at the entrance to the mosque.

The barricades were built from closets, wood and metal beams, ropes and large marble tiles. The police force locked the entry doors to the mosque with the rioters inside the complex. 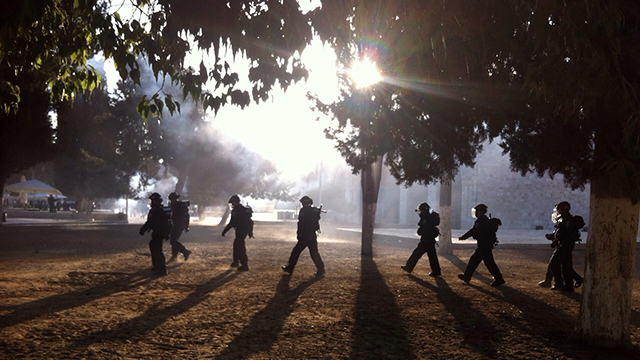 Visits to the Temple Mount compound by Jews and tourists continued as usual. Israel Police said it would "continue to operate and show zero tolerance towards any attempt to break the peace, and will operate to stop the rioters and prosecute them to the full extent of the law."

Jerusalem Police maintained an increased alert posture this morning. Officers, Border Guard units, and volunteers were deployed across the city in crowded sites, shopping centers, and markets – as well as flash points like the Old City and around synagogues – in order to maintain the peace and protect worshippers.