Kuwaiti report says that blast at Iran's Parchin military complex – rumored to be connected to Iran's alleged nuclear program – was perpetrated by a foreign country.

Diplomats claim that the mysterious blast which rocked a top secret Iranian military base at the beginning of the week was the work of a foreign nation and could have prevented attempts by the Islamic Republic to test unconventional warheads.

Citing unnamed Washington-based European diplomats, the report by Kuwait’s Al Rai claimed "the massive blast which took place this week (Monday) at the Parchin facility was no accident, but a premeditated attack by a foreign country." 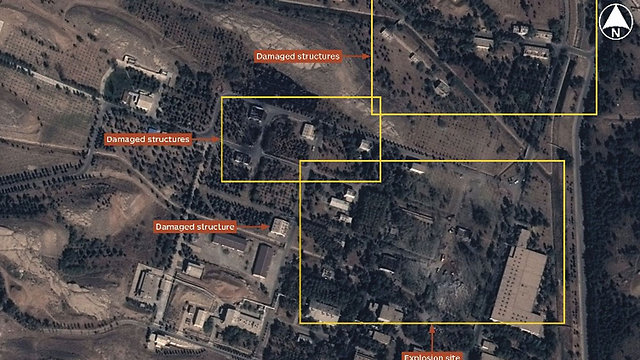 Satellite images of Parchin military complex after blast
The report also claimed that Western intelligence agencies think Iran had been using the facility to conduct research related to its alleged nuclear program, conducting tests at the facility aimed at loading possible nuclear warheads onto ballistic missiles. The report further seemed to insinuate it was Israel who was behind the alleged attack, and even claimed that Iran attempted to exact revenge on Israel for the incident through its proxy in Lebanon – Hezbollah – who recently wounded two soldiers after placing a bomb on the on the border with Israel. "That very same blast (in Parchin) led Iran to order Hezbollah to place a bomb at Mount Dov, which then wounded two Israeli soldiers," read the report.

Some anayslts have speculated the Parchin military center was the 'smoking gun' of Iran's nuclear program. The unnamed diplomat in the report elaborated on the possibility, saying that "it is possible the attack managed to thwart new Iranian attempts to arm their missiles with unconventional warheads."

Iran's official IRNA news agency on Monday cited an Iranian defense industry body as saying that two workers were killed in a fire at an explosives factory in an eastern district of Tehran.

An Iranian opposition website, Saham, described the incident as a strong explosion that took place near the Parchin military complex around 30 km southeast of the capital. It did not give a source and the report could not be independently verified.

Meanwhile, the Washington-based Institute for Science and International Security (ISIS) said it had obtained commercially available satellite imagery on which six buildings at Parchin appeared damaged or destroyed. The UN International Atomic Energy Agency wants to visit this area of Parchin, but Iran has so far not granted access. Iran says Parchin is a conventional military facility and that its nuclear program is entirely peaceful. It has often accused its enemies of seeking to sabotage its atomic activities.

ISIS, which closely tracks Iran's nuclear program, said its analysis of the satellite imagery from October 7 and 8 indicated an explosion could have taken place at a southern section of Parchin.