'They have taken at least 40 percent (of the town),' NGO says as US-led coalition ramps up strikes on Syrian town of Kobani before militants attack border crossing with Turkey, tightening noose around Kurdish defenders.

Islamic State fighters advanced deeper into the Syrian town of Kobani on the Turkish border on Friday, and have taken control of a command center belonging to the Kurdish forces defending the Syrian city of Kobani from invasion, Arab-language Sky News reported. Al Jazeera claimed the forces have also taken the city's jail, located in the center of the city.

"They have taken at least 40 percent (of the town)," Rami Abdulrahman, who runs the Syrian Observatory for Human Rights, said by telephone. 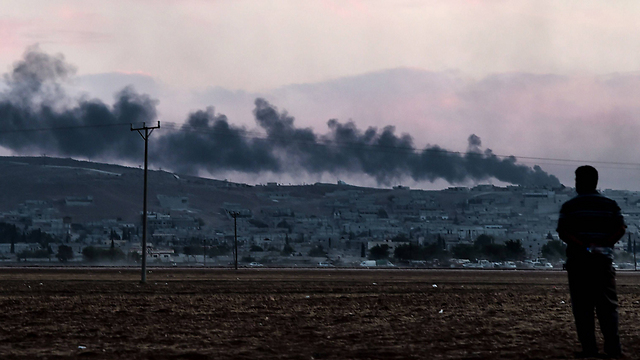 Islamic State fighters were now in almost complete control of the "security quarter", which is home to the administrative buildings used by the local government, he said.

Ocalan Iso, deputy head of the Kurdish forces, said Islamic State was still bombarding the town centre with mortars, showing that its fighters had not extended their control over more than 20 percent of the town. "There are fierce clashes and they are bombing the centre of Kobani from afar," he said by telephone. 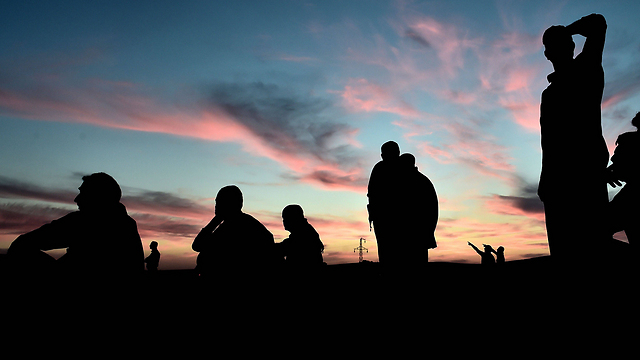 Kurds on the outskirts of Kobani (Photo: AFP)

Meanwhile, a local Kurdish official and Syrian activists say the group is shelling a Syrian border crossing with Turkey to try and capture it and cut off the embattled town of Kobani.

The official, Idriss Nassan, says Islamic State fighters aim to seize the crossing in order to close the noose around the town's Kurdish defenders and prevent anyone from entering or leaving Kobani.

The Britain-based Syrian Observatory for Human Rights says the militants on Friday shelled several areas in Kobani, including the border crossing, which is the town's only gateway to Turkey.

Islamic State group this week pushed into Kobani for the first time since launching its offensive in the area in mid-September.

Activists say the fighting over Kobani has killed more than 500 people.

The US-led coalition intensified its aerial bombardment of Islamic State positions Thursday in the Syrian border town of Kobani as the extremist group fought street battles with Kurdish forces and reportedly rushed in reinforcements.

It has also strained ties between Washington and Ankara over the long-term US strategy in Syria. On Thursday, the US special envoy for the coalition, retired Marine Gen. John Allen, and NATO chief Jens Stoltenberg were in Turkey to press the country to join military operations. 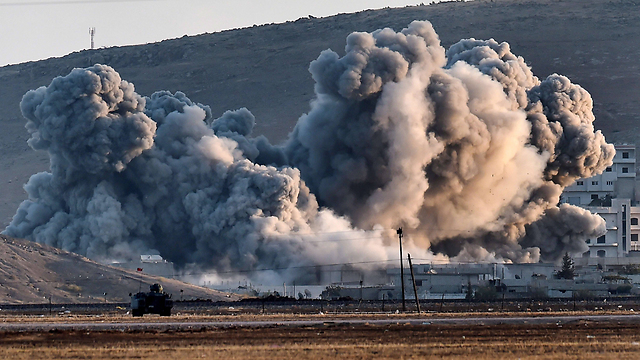 Turkish officials have said that while they do not want Kobani to fall, they will not take on a greater role until the coalition outlines a broader strategy that also includes attacking Syrian President Bashar Assad, who is best positioned to benefit from any rollback of the Islamic State group.

But attacking Assad's regime "is not the focus of our international coalition and not the focus of our efforts by the United States," State Department spokeswoman Jen Psaki said. Psaki said Allen and Turkish officials discussed ways to advance the effort against the Islamic State group and said a joint military planning team will visit Ankara early next week. "Both sides also agreed that we will continue a dynamic and deepening bilateral consultation process across the multiple lines of effort against ISIL, including military support, countering foreign fighters, counter-finance, humanitarian assistance, and de-legitimizing ISIL's messaging and rhetoric," she said using and acronym for the Islamic State group. 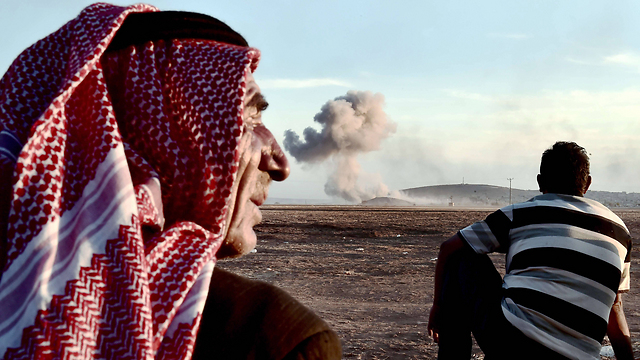 Turkey also has called for the creation of a buffer zone inside Syria to secure the border, but the White House and Pentagon said Wednesday the US is not considering that option. Such a zone would be costly and complex to enforce.

US officials said Thursday the US is largely talking to Turkey about other things it could do besides inserting ground forces into the fight: allowing US and coalition aircraft to fly over Turkish territory; allowing its air base in Incirlik, some 160 kilometers (100 miles) from the Syrian border, to be used by US or coalition planes or for logistics and training; and equipping moderate Syrian opposition forces fighting to topple Assad. The officials were not authorized to discuss meetings underway between US and Turkish officials in Ankara and requested anonymity.

Islamic State flag outside Kobani (Photo: AFP)
The fight for Kobani has brought Syria's civil war yet again to Turkey's doorstep, and for weeks the US and its allies have pressed Ankara to take a more robust role in the coalition. In addition, Kurds have held massive demonstrations across Turkey in which they accuse the government, which has deployed its tanks just across the frontier, of doing nothing to save the town. Ankara is suspicious of the Syrian Kurdish forces fighting in Kobani, seeing them as an extension of the Kurdish PKK, which waged a long and bloody insurgency against Turkey. Responding to the criticism, Turkish Foreign Minister Mevlut Cavusoglu said it was unrealistic to expect Turkey to launch a ground war against the Islamic State group on its own. Cavusoglu spoke at a news conference in Ankara with NATO's Stoltenberg, who said there was no easy solution for Kobani. "ISIL poses a grave threat to the Iraqi people, to the Syrian people, to the wider region, and to NATO nations," Stoltenberg said. "So it is important that the whole international community stays united in this long-term effort." Cavusoglu said Turkey is prepared to play a bigger part once a deal is reached with the coalition. "Turkey will not hold back from carrying out its role," he said. Secretary of State John Kerry and Turkish Prime Minister Ahmet Davutoglu have spoken at least twice this week. In Kobani, columns of smoke rose as warplanes buzzed overhead Thursday. Two strong explosions -- apparently from an airstrike -- echoed from the edge of the town, a cluster of low-slung concrete buildings nestled in rolling hills. The crackle of gunfire and blasts could be heard on the Turkish side, where people watched the fighting unfold from a stretch of farmland. The coalition airstrikes have forced some Islamic State militants out of Kobani. The US Central Command said five airstrikes south of Kobani since Wednesday had destroyed an Islamic State group support building and two vehicles, and damaged a training camp. The strikes also hit two groups of Islamic State fighters, it said in a statement. "Indications are that Kurdish militia there continue to control most of the city and are holding out against ISIL," it said, using an acronym for the Islamic State group, which controls large parts of Syria and Iraq. But the Pentagon has said the town may yet fall to the extremists because air power alone cannot prevent it. Despite the airstrikes, the Islamic State fighters managed to capture a police station in the east of Kobani, said the Britain-based Syrian Observatory for Human Rights. It said 11 Islamic State fighters were killed, adding that Kurdish fighters captured four jihadis. The station was later struck by coalition jets. The Observatory, which relies on activists across Syria, said Kurdish forces had surrounded the jihadists near the station and that heavy fighting was underway. The Observatory said the militants had seized more than a third of Kobani, but Kurdish officials disputed that, saying their forces had recaptured several parts of the town. "I can confirm that they don't control a third of the city. There is only a small part of Kobani under the control of Daesh," said local Kurdish official Idriss Nassan, using an Arabic acronym to refer to the Islamic State group. Both Nassan and the Observatory said more than 20 airstrikes have been conducted in the area since Wednesday afternoon. Islamic State militants launched their offensive on Kobani in mid-September, capturing several nearby Kurdish villages and steadily strengthening their control around the town. The fighting has forced at least 200,000 residents to flee over the frontier into Turkey. The Observatory's chief, Rami Abdurrahman, said more than 500 people have been killed in and around Kobani since the fighting began. He said the Islamic State group was rushing in reinforcements, indicating the extremists also view Kobani as a test of will.