Together with Kailash Satyarthi, 17-year-old children's rights activist Malala Yousafzai wins Nobel Peace Prize, only 2 years after being shot by Taliban for fighting for right of girls to go to school; Peres hails Malala's win, calling it a 'worthy one'.

Children's rights activists Malala Yousafzai of Pakistan and Kailash Satyarthi of India were awarded the Nobel Peace Prize Friday. The Norwegian Nobel Committee cited the two "for their struggle against the suppression of children and young people and for the right of all children to education." 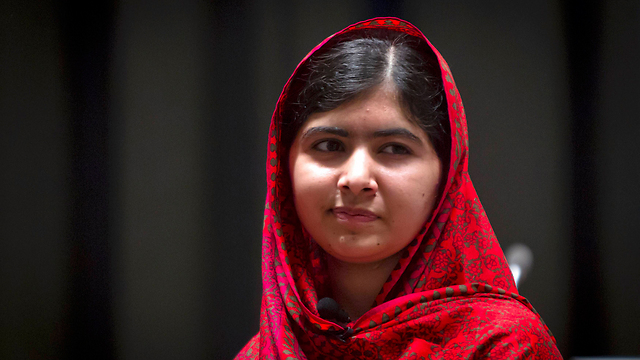 Malala Yousafzai (Photo: Reuters)
Yousafzai, now 17, is a schoolgirl and education campaigner in Pakistan who was shot in the head by a Taliban gunman two years ago. Indian children's right advocate Satyarthi, 60, has maintained the tradition of Mahatma Gandhi and headed various forms of peaceful protests, "focusing on the grave exploitation of children for financial gain," the Nobel committee said. 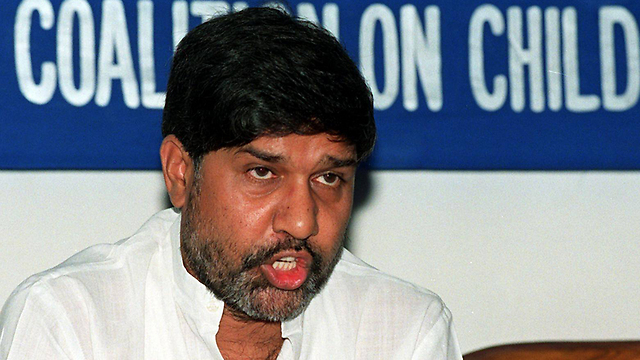 Kailash Satyarthi (Photo: AFP)
The Nobel Committee said it "regards it as an important point for a Hindu and a Muslim, an Indian and a Pakistani, to join in a common struggle for education and against extremism," Thorbjoern Jagland, the head of the Norwegian Nobel Committee said.

"It has been calculated that there are 168 million child laborers around the world today," Jagland said. "In 2000 the figure was 78 million higher. The world has come closer to the goal of eliminating child labour."

Former president Shimon Peres, one of the oldest Nobel Peace Prize laureates, congratulated Pakistan's Malala Yousafzai on her award for the same honour on Friday.

"The decision to award Malala the prize is a worthy one," Peres, 91, said in a statement.

"She is a symbol to women and girls across the world and an example to all of us," he said, paying tribute to the youngest Peace Prize laureate.

"Malala, you defeated those who tried to silence you and your victory is a victory for peace. We are all proud of you."

The founder of the Nobel Prizes, Swedish industrialist Alfred Nobel, said the prize committee should give the prize to "the person who shall have done the most or the best work for fraternity between nations, for the abolition or reduction of standing armies and for the holding and promotion of peace congresses."

The committee has interpreted those instructions differently over time, widening the concept of peace work to include efforts to improve human rights, fight poverty and clean up the environment.

Malala, now aged 17, became globally known in 2012 when Taliban gunmen almost killed her for her passionate advocacy of women's right to education.

Unable to return to Pakistan after her recovery, Yousafzai moved to Britain, setting up the Malala Fund and supporting local education advocacy groups with a focus on Pakistan, Nigeria, Jordan, Syria and Kenya.

She has since become a symbol of defiance in the fight against militants operating in Pashtun tribal areas in northwest Pakistan - a region where women are expected to keep their opinions to themselves and stay at home.

"The terrorists thought that they would change our aims and stop our ambitions but nothing changed in my life except this: Weakness, fear and hopelessness died. Strength, power and courage was born," she told the United Nations last year.

"I do not even hate the Talib who shot me. Even if there is a gun in my hand and he stands in front of me. I would not shoot him," she said in a speech which captivated the world.

Malala has also won the European Union's human rights award and was one of the favourites to win the Nobel Prize last year.

Now based in Britain, she is unable to return to her homeland because of Taliban threats to kill her and her family members. The current Taliban chief, Mullah Fazlullah, was the one who ordered the 2012 attack against her.

Yousafzai has enrolled in a school in Birmingham and become a global campaigner for women's right to education and other human rights issues, taking up issues such as the situation in Syria and Nigieria.

"It's an honor to all those children who are still suffering in slavery, bonded labour and trafficking," Satyarthi told news channel CNN-IBN after he shared the prestigious award with Malala.

Satyarthi founded Bachpan Bachao Andolan - or Save the Childhood Movement - in 1980 and has acted to protect the rights of 80,000 children.

"It's an honour to all my fellow Indians. I am thankful to all those who have been supporting my striving for more than the last 30 years," said Satyarthi.

The Peace Prize was shared between India and Pakistan amid intense crossfire on the frontier of the disputed territory of Kashmir. In his initial reaction, Satyarthi made no reference either to the conflict or to Malala.

"A lot of credit goes to the Indians who fight to keep democracy so alive and so vibrant, where I was able to keep my fight on," said Satyarthi.

"Something which was born in India has gone globally and now we have the global movement against child labour. After receiving this award I feel that people will give more attention to the cause of children in the world."