12 Israelis hospitalized in Kathmandu after freak storms left at least 25 dead; dozens of trekkers from around world still unaccounted for; Israel to send further assistance.

The Foreign Ministry in Jerusalem confirmed Thursday that three Israelis have been killed and one is missing after freak heavy snowstorms and avalanches struck the Mustang and Manang regions in Nepal on Tuesday and Wednesday.

Searches resumed at first light Thursday for the dozens of trekkers from around the world who have not made contact since the storms. Local officials say at least 25 people have been killed in the storms.

At least 85 climbers were still unaccounted for after the blizzard dumped snow and triggered avalanches along the mountain trekking route popular with backpackers. 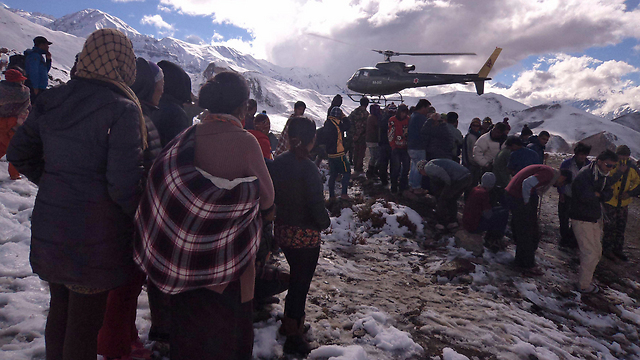 Army and civilian rescue workers say the number of missing is based on a register of climbers in the affected area. Not all of those people were necessarily trapped by the weather and some may have left the trekking area, the rescue workers said.

Those killed by the unseasonable weather, brought by the tail end of a cyclone that struck India on the weekend, also included nine Nepali citizens, two people from Slovakia, three Polish citizens, four Canadians and one person from Vietnam.

At least 14 foreign trekkers have been rescued so far, including two from Hong Kong and 12 Israelis who were being treated at the Military Hospital in Katmandu.

A special Facebook page has been set up by the families and friends of the missing trekkers in order to help share information. The page has posted an image showing a list of the 14 receiving treatment at the Katmandu hospital, including the 12 Israelis. Of the 12, 11 are suffering from frost bite, while the twelfth appears to have sustained further injury.

One of the Israelis said that the guide for his group of 20 people from all over the world had simply left them to their fate in the storm. 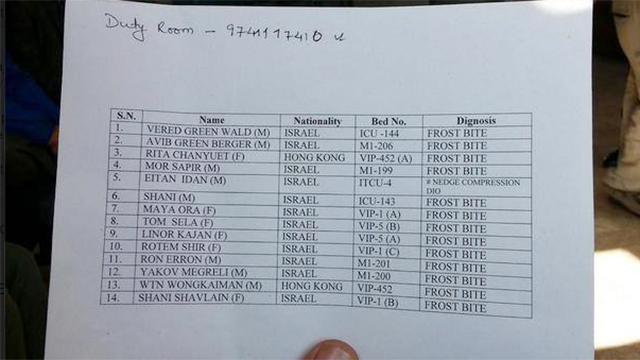 Gopal Babu Shrestha, the treasurer of the Trekking Agencies' Association of Nepal, said Thursday morning that 23 people had been rescued. "This is one of the worst mountaineering accidents that I can remember," Shrestha said.

Avi Subedi, branch manager of the Flyeast Nepal tour company, arrived Thursday morning at the Kathmandu hospital in order to assist the Israelis there.

"We brought them food and clothes and we are helping them with anything they need," Subedi said. "We are trying to find the other Israelis on the list we have of those who went out on the route. Some have been in touch, and some are still missing." 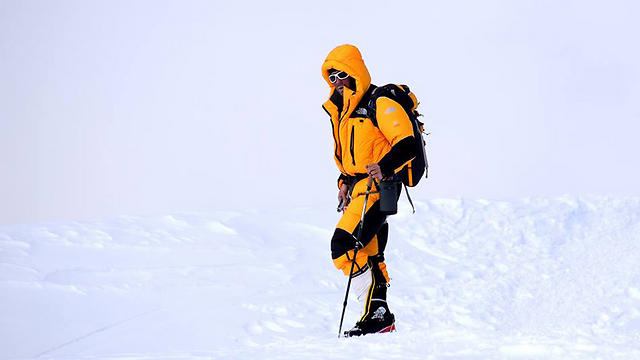 Israeli trekker Nadav Ben Yehuda has been rescued from the area (Photo: Courtesy of the family)

The Foreign Ministry had planned to hold a situation assessment in Jerusalem on Thursday evening. The ministry has decided to send more teams to the afflicted region and bolster its team in Kathmandu. The ministry said Thursday that the father of the Israeli whose body was found Wednesday was in Moscow, and the embassy there had contacted him and provided him with an escort back to Israel. 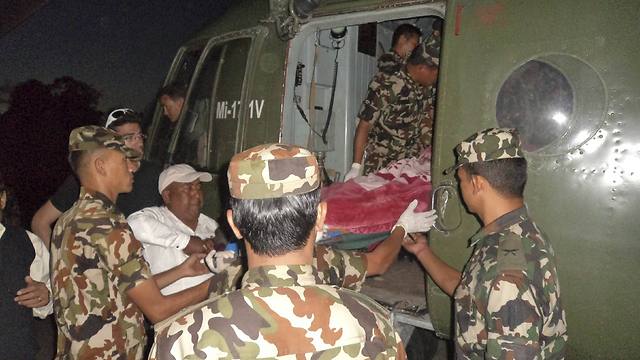 Improving weather conditions allowed rescue workers to recover the bodies of four trekkers -- two Poles, an Israeli and a Nepali -- from the Thorung La pass area on the Annapurna Circuit trekking trail on Wednesday, a day after they were caught in the blizzard.

Police chief Govind Pathak said attempts were being made to recover the additional eight bodies from the Annapurna mountain range's Mustang district.

The death toll was likely to increase as officials reach other parts of the trail where the trekkers were caught by the deadly blizzard.