Secretary of State says resumption of peace talks 'imperative' because the conflict is 'a cause of recruitment and of street anger and agitation.'

US Secretary of State John Kerry on Thursday called for a resumption of the Israel-Palestinian peace process, saying the talks were vital in the fight against extremism.

"It is imperative that we find a way to get back to the negotiations," Kerry said at a State Department ceremony marking the Muslim festival of Eid al-Adha. 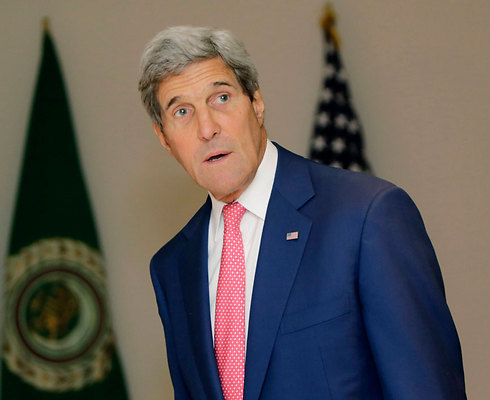 US Secretary of State John Kerry in Egypt (Photo: AP)

Kerry has just returned from a tour of Europe and Egypt, where on Sunday he attended a conference on the reconstruction of Gaza, and where he told Israel and the Palestinians to return to the negotiating table.

We need "to find a way to create two states that can live together side by side, two peoples, with both of their aspirations being respected," Kerry added.

He said the unresolved Israel-Palestinian conflict was fueling recruitment for the Islamic State jihadist group.

"There wasn't a leader I met with in the region who didn't raise with me spontaneously the need to try to get peace between Israel and the Palestinians, because it was a cause of recruitment and of street anger and agitation," Kerry said.

"People need to understand the connection of that. And it has something to do with humiliation and denial and absence of dignity," he added.

Kerry was the architect of the resumption of the Israeli-Palestinian peace process between July 2013 and April.

Eid al-Adha, also known as the "Festival of Sacrifice," celebrates the end of the Hajj pilgrimage.