Palestinian officials say they have 7 of the 9 minimum required 'yes' votes in UN Security Council; Palestinian UN envoy says Palestinians will join ICC, other treaties if resolution fails to pass.

The Palestinians are faced with "severe difficulties" hindering their efforts to pass a draft resolution at the UN setting a deadline for Israeli withdrawal from the West Bank and East Jerusaelm, former chief Palestinian peace negotiator Saeb Erekat told Xinhua earlier this week.

The Palestinian unity government wants the UN Security Council to vote on a resolution before the end of the year that would set November 2016 as the deadline for Israeli troops to withdraw back to the 1967 borders.

"It is really difficult to convince at least nine members in the Security Council to vote in favor of our plan. We are facing severe difficulties and we are exerting intensive efforts with our Arab brothers to gain the votes of at least nine council members," Erekat told the Chinese news agency.

Palestinian officials said Thursday they have seven "yes" votes in the 15-member Security Council and are seeking additional support. A minimum of nine votes is needed for approval, and then the measure can be vetoed by one of the five permanent members, including the United States.

Efforts were "going on in every direction to guarantee presenting the resolution to the council for voting," the PLO official said, declining to elaborate on which countries might be in favor and which might be against the resolution. 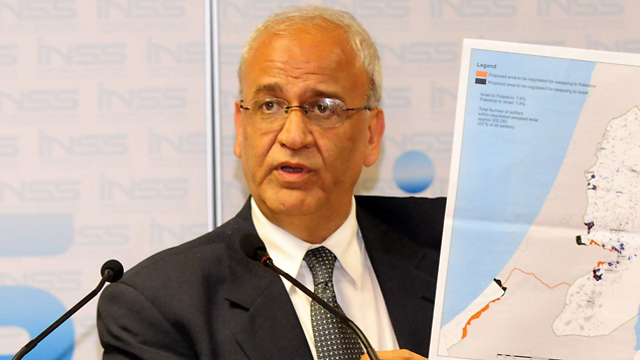 Saeb Erekat (Photo: Kfir Sivan)
The Palestinians have been under intense pressure not to push forward with the resolution - including with alleged threats of cuts to US aid. Since the collapse of US-led peace talks with Israel in April, the Palestinians have been pursuing a new diplomatic path to independence via the United Nations and by joining international organizations.

The Palestinians won the status of UN observer state in 2012.

A draft of the resolution obtained by AFP earlier this month calls for the "full withdrawal of Israel, the occupying power, from all of the Palestinian territory occupied since 1967, including East Jerusalem, as rapidly as possible and to be fully completed within a specified timeframe, not to exceed November 2016."

An initiative in the Security Council is sure to meet opposition from the United States, which has repeatedly vetoed resolutions seen as undermining Israel. 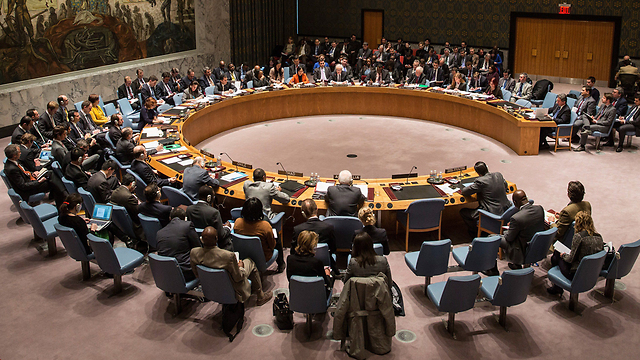 UN Security Council (Photo: AFP)
Palestinian envoy to the UN, Riyad Mansour, said Friday that if the resolution is defeated, the Palestinians have other options.

"This is not going to be an open-ended exercise," he said. "The main option is to go with a vote."

The draft resolution is an expression of Palestinian frustration with the repeated failure of US-led negotiations with Israel on the terms of an independent Palestinian state. Mansour said the Palestinians will not go back "to the same kind of negotiations that have led us nowhere for more than 20 years." US Ambassador Samantha Power, asked earlier this month about a deadline for an Israeli pullout, said that the United States strongly believes the only solution to the Israeli-Palestinian conflict is through negotiations between the two parties. Israel's Ambassador to the UN, Ron Prosor, said when the draft was first circulated that by pursuing the resolution the Palestinians were "bypassing negotiations by taking unilateral action" and "avoiding a real dialogue."

Mansour said the Palestinians are committed to voting on the resolution and "the centerpiece of our resolution is the time frame." 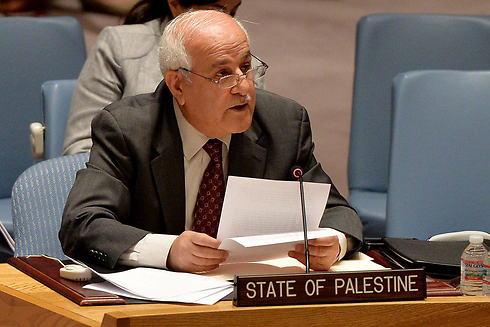 Palestinian envoy to the UN, Riyad Mansour (Photo: EPA)
He said one option if the draft resolution is defeated is for the Palestinians to join more treaties and conventions and the International Criminal Court. "We want to create legal facts on the ground that we exist as a state," Mansour said, adding that joining additional treaties, conventions and the ICC will further "acknowledge that a Palestinian state does exist." Mansour said the Palestinians may also go to the UN General Assembly where resolutions are not legally binding but there are no vetoes. The Associated Press and AFP contributed to this report.