Hezbollah faces near daily attacks launched from the Syria border by IS and Nusra Front, while jihadi recruitment in impoverished Sunni areas of northern Lebanon is on the rise.

BEIRUT - With all eyes on the Islamic State group's onslaught in Iraq and Syria, a less conspicuous but potentially just as explosive front line with the extremists is emerging in Lebanon, where Lebanese soldiers and Shiite Hezbollah guerrillas are increasingly pulled into deadly fighting with the Sunni militants along the country's border with Syria.

The US has been speeding up delivery of small ammunition to shore up Lebanon's army, but recent cross-border attacks and beheading of Lebanese soldiers by Islamic State fighters - and the defection of four others to the extremists - has sent shockwaves across this Mediterranean country, eliciting fear of a potential slide into the kind of militant, sectarian violence afflicting both Syria and Iraq, and increasingly prompting minorities to take up arms. The crisis was slow in coming.

For long, Lebanon managed to miraculously avoid the all-out chaos gripping neighboring countries - despite sporadic street clashes and car bombings, and despite being awash with weapons and taking in an endless stream of refugees from Syria who now constitute a staggering one third of its population of 4.5 million people. 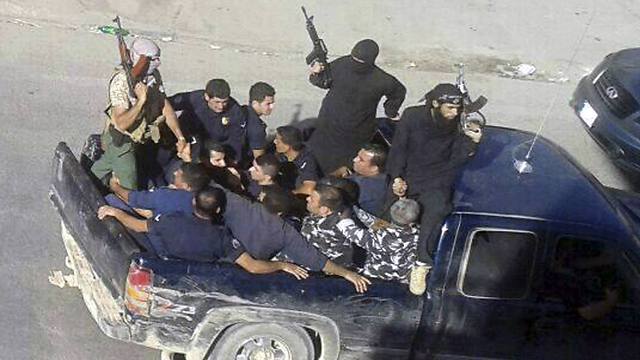 Gunmen drive away with about a dozen men, two in camouflage police uniforms, in Arsal (Photo: AP)
Unlike in Syria or Iraq, the al-Qaeda-breakaway Islamic State group does not hold territory in Lebanon. But along with Syria's al-Qaeda affiliate, the Nusra Front, it has established footholds in remote mountains along Lebanon's remote eastern border, from where it launches almost daily incursions further afield. Jihadi recruitment in impoverished Sunni areas of northern Lebanon is on the rise, and black Islamic State group flags fly freely in some areas, reflecting pockets of growing support for the radical group. "Lebanon is in the eye of the storm," said Fadia Kiwan, a political science professor at Beirut's St. Joseph University.

The Lebanese are bitterly divided over Syria's civil war. Hezbollah fighters have gone to join Syrian President Bashar Assad's forces in their battle against Sunni rebels, drawing anger at home from Lebanon's Sunnis and stoking Sunni-Shiite tensions. This in turn led to tit-for-tat suicide bombings and several rounds of street clashes in Lebanon in the past year.

The Islamic State group threat first came to Lebanon in August, two months after the group's summer blitz in which it seized large swaths of territory in Iraq and Syria. In a surprise attack, Islamic State group and Nusra Front militants crossed over from Syria and overran the predominantly Sunni Lebanese border town of Arsal, hitting Lebanese army positions and killing nearly 20 soldiers. After weeklong clashes, the militants pulled back to mountain caves near Syria's border, taking more than 20 Lebanese soldiers and policemen with them.

Islamic State fighters have since beheaded two Lebanese soldiers. Nusra Front militants have shot dead a third. In return for remaining hostages, they have issued various demands, including the withdrawal of Hezbollah troops from Syria, and the release of Islamists from Lebanese prisons. 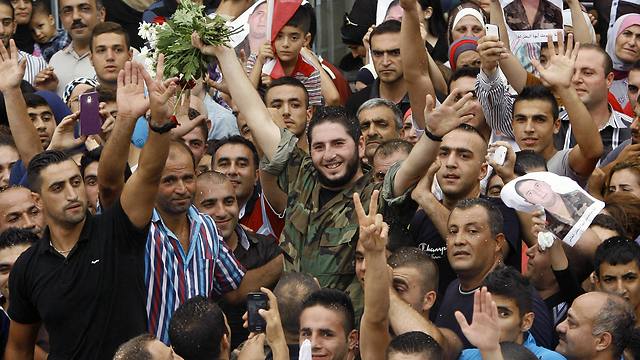 Lebanese army soldier Wael Darwish, who was captured by militants in August in Arsal, celebrates after his release (Photo: AP)
Lebanese army commander Jean Kahwaji said in comments published this week that the militants from Syria want to ignite civil war and create a passage to Lebanon's coastline by linking the Syrian Qalamoun mountains with Arsal on the border and the northern Lebanese town of Akkar, an impoverished Sunni area. Analysts agree that in Lebanon, the Islamic State group fighters also see an opportunity to strike at Hezbollah's patron, the Shiite powerhouse Iran but that they are not too eager to immediately embark on yet another war. "The territory of Lebanon is a longer-term goal," said David Schenker, director of the program on Arab politics at the Washington Institute for Near East Policy. But there are fears that eventually, Schenker said, the Islamic State group could stage a spectacular bombing of, for example, the Hezbollah stronghold of Dahyeh south of Beirut, recreating an incident similar to a 2006 attack in the Iraqi city of Samarra, and "unleash this incredible sectarian tension that results in a resumption of civil war."

In Samarra, the Sunni extremists bombed a major Shiite shrine, setting in motion two years of sectarian bloodletting that pushed Iraq to the brink of civil war. Lebanon is still recovering from a 15-year civil war that ended in 1990. 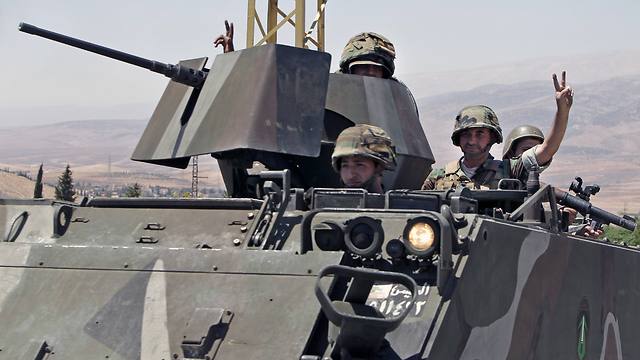 Lebanese army troops on their way to Arsal on the Syria-Lebanon border (Photo: AP)
The global war against Islamic State group and its attacks in Lebanon have somewhat bolstered Hezbollah's narrative that its intervention in Syria was necessary to ward off a Sunni extremist threat to Lebanon. Paradoxically, it has brought Hezbollah closer to Christians and other Lebanese minorities through their shared fear of the Sunni militants. But the Lebanese Shiite group is hated by most Lebanese Sunnis, many of whom refer to Hezbollah as the "Party of Satan" - a dark play on Hezbollah's name, which in English means "Party of God." In addition to being bogged down in the fighting in Syria, Hezbollah is increasingly embroiled in clashes inside Lebanon. In an unprecedented attack, Nusra Front fighters overran positions manned by Hezbollah along the Syrian border last week, killing eight of its fighters in battles that lasted several hours. "Such attacks not only erode the stature of Hezbollah, they show it to be vulnerable. I think in the long run or as the months go by we're going to see more and more of this," Schenker said. In a rare excursion outside his underground bunkers, Hezbollah leader Sheik Hassan Nasrallah traveled to the Bekaa Valley in eastern Lebanon last week to meet his fighters, Hezbollah official Mohammad Afif said - an apparent move to boost their morale. "Hezbollah entered a battle that is bigger than Lebanon," said Kiwan, the political science professor. "Today, Hezbollah is obliged to continue in the battle that it started." Along with the Lebanese army, Hezbollah is fighting almost daily incursions by Islamic State group militants in Bekaa, prompting accusations that the army is collaborating with the Shiite guerrilla against the Lebanese Sunnis, placing the army in the thick of the Sunni-Shiite confrontation. Adding to the deadly mix, four Lebanese soldiers, all Sunnis from north Lebanon, have deserted from the army and joined either the IS or the Nusra Front since July. One of the deserters, Abdallah Shehadeh, said in a video posted online by Nusra Front this week that he had initially "enlisted in the army to defend the Lebanese people" - only to find that the army is a "Hezbollah tool." Though a handful of desertions do not pose an imminent risk to the stature of Lebanon's military, such publicized statements may eventually hurt it and make the recruitment of Sunni conscripts more difficult, analysts say. Because of the Lebanese Sunni-Shiite divisions and the pro- and anti-Assad split, the civil war in Syria has completely paralyzed the government in Beirut. Lebanon has been without a president since May, and parliament is set to postpone elections for the second time, ostensibly because the security situation makes it impossible to hold a vote. Moreover, the government faces escalating protests by families of the captive soldiers and policemen who have blocked roads and set up protest tents, including several pitched last week near the government building that blocked traffic in Beirut's commercial center. They families accuse the government of not doing enough to secure the freedom of their loved ones. "We hope that the state (of Lebanon) will do something that restores its dignity," said Layal Dirani, the sister of policeman Suleiman Dirani, who was taken captive by the Nusra Front on August 2.