Jerusalem light rail - a microcosm of a city divided

From symbol of coexistence to ghost train, the capital's Jewish residents prefer to disembark before the rails reach East Jerusalem, with its stonings and firebombings.

It is nine o'clock in the evening, and in Jerusalem we board the light rail of which Tel Aviv is so jealous, travelling from the city center towards Pisgat Ze'ev. The cars are jam-packed, and there is hardly even room to stand in the overcrowded carriages. At the Ammunition Hill station, so symbolic, the cars empty. Most of the Jewish passengers alight, frightened.

"The train is within a few minutes (walk) from our house," the Feldmans, a couple with a baby carriage, tell me. "But like our neighbors, we prefer to get off here, far from home and before the train passes through the Arab neighborhoods, and take a shuttle bus to our neighborhood."

Three months after the murder of East Jerusalem teen Mohammed Abu Khdeir, the train is pelted by rocks and Molotov cocktails every night.

"I'm afraid that it will end in disaster," one of the train drivers told me a month ago.

"I pray every trip," says a resident of Pisgat Ze'ev. "I have been on five trains that were attacked. It's not pleasant. My wife and I decided that we will take the bus until things calm down."

"It's always on my mind that there will be a terror attack on the train," says Judah Aviv, 25-year-old student from the Hebrew University, who is sitting in the carriage with some friends. "We don’t get off at Ammunition Hill on principle; they will not make us run away. But I cannot see how this is allowed to happen."

Only the direct intervention of Prime Minister Benjamin Netanyahu and Public Security Minister Yitzhak Aharonovich led the police this week, somewhat belatedly, to try to take control of the situation. One hundred and fifty trains have been damaged, removed from the rails and repaired since the riots in Jerusalem began. Hundreds of other incidents of stones being thrown at the trains have ended without significant damage; most are not even reported and have become a matter of routine.

Since the start of the riots, approximately 40 people have been arrested and charged with train sabotage. Last Saturday night, for example, there were five incidents of stone throwing in Shuafat throughout the four hours between 8 p.m. and midnight. Four trains were damaged as a result in that period; altogether, there has been damage to a record number of trains - nine out of the 23 in use.

"It means," says a Transport Ministry official, "that 40 percent of the carriages were hit, causing significant deterioration in the frequency of the trains, major delays and poor service."

In recent weeks, as preparation for this article, I spent a few days on the light rail. We made our trips in the middle of the Sukkot holiday, when the trains were recording new record numbers of passengers (in the city center only, of course). 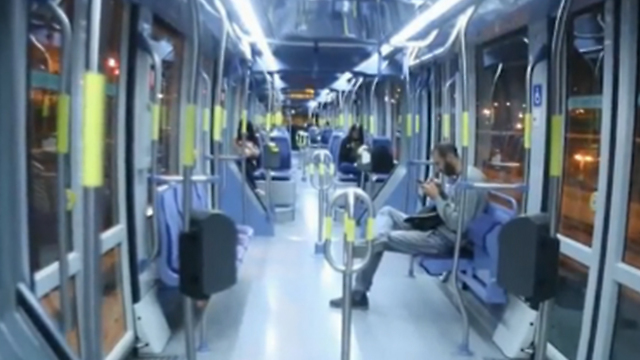 After the French Hill and Ammunition Hill stations, the light rail becomes a ghost train. The entrance to Shuafat is already reminiscent of a combat zone. It is a massive contrast to the city center, where the holiday brought long queues of people wanting to board the trains. In some cases, the queues even overflowed onto the surrounding streets, and police were called in to keep order.

But here in the Arab neighborhoods, a police vehicle is parked parallel to the tracks every few meters. The Border Police are trying to track the rioters. On one of the mosques from where Molotov cocktails have been thrown hangs a sign in memory of Mohammed Abu Khdeir, who was murdered by Jews. Inside the train, the alert level rises. Inside every car, aside from the train's armed security guards, are Border Police officers with guns.

In recent days, a police presence has replaced the railway franchise holder, City Pass, and the Transportation Ministry of Transportation, and the police themselves have begun to release status updates to the media. "We are here until further notice," said a police statement.

The passengers, meanwhile, don't feel reassured, and they prefer to take the slower bus and exchange the comfort of the train for an extra half an hour of travel. And there are those who are avoiding the train altogether lately.

"We prefer to travel by bus or private vehicle even during the heaviest traffic," says Alex Tantzer, a resident of Pisgat Ze'ev. "It takes me more than half an hour to get out of the neighborhood, but there's not alternative. It was all so predictable; it did not surprise me in the least. In the past, when the buses from Neve Ya'akov used to pass through Shuafat, they would throw Molotov cocktails and stones at us too."

It was dubbed the train of coexistence; and in the city center, you can still find ultra-Orthodox and Muslim families, students from the two peoples and tourists in the same carriage. But it's all come crashing down in the past three months: The suspicious looks, a proliferation of security guards, the armed police. The train to Sderot, which overlooks Gaza, appears more peaceful. 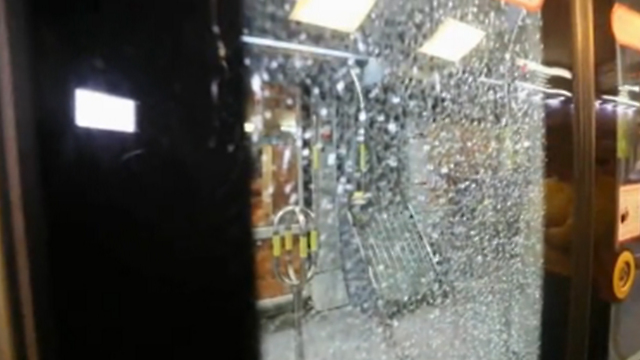 Damage after an attack on a train (Photo: Gil Yohanan)

The Pisgat Ze'ev station, on the way to the center of Jerusalem, is practically deserted at night – barely two or three people. At the Arab stations, on the other hand, dozens of passengers board the train. The station is a total wreck.

The glass panes are shattered, and the broken awnings have yet to be repaired. Signs of arson are still visible.

The residents ask to remain anonymous, but tell me they are very angry about the murder of the Arab youth. They add, however, that they are the ones to suffer in the end due to the attacks on the train.

"Too bad the kids don't realize this," one of the Arab passengers tells me. "We tried to explain it to them, but to no avail it seems. In the end, time will heal the wounds. It's very unpleasant to get onto the train with all the police officers."

C., a school teacher in one of the Arab neighborhoods, agrees to talk to us on condition that we do not reveal his name. "The police are not stationed only around the track, but also in shops and yards," he says. "Yesterday, despite all the police, young people continued to throw stones. They are not afraid. Because of the police, they are more motivated now."

It has already been dubbed "The Children's Intifada." The peers of Mohammed Abu Khdeir have taken to the streets, despite the fact that many adults in the Arab neighborhoods are opposed to the violence. Two torched stations have yet to be restored in Shuafat, and the automatic ticketing machines are out of order – a large notice instructs passengers to purchase tickets at nearby shops.

"The train serves us just as it serves the Jews," says Taufik, who works in Kiryat Yovel. "A few children have taken the law into their hands, and the entire police force has gone mad. We are quietly trying to calm things down here, but it's impossible because there will always be hotheads."

Mohammed, 15, of Shuafat, boards the train with some boys his age. I ask them about the stone-throwing. They blush. "The train is good," they say, and laugh and run to the other end of the car, hiding their faces.

City Pass officials are proud of the fact that the train is still traveling through Beit Hanina and Shuafat despite the unrest.

"When we requisitioned the cars, they were manufactured to offer protection against rocks and Molotov cocktails," said a statement from City Pass. "Fortunately, therefore, there have been no casualties until now; but this doesn't ease the minds of the passengers.

"Around 140,000 people use the light train on a daily basis. As a result of the events during the months of July and August, we've seen a drop of approximately 20 percent in the number of passengers along the line. The drop stems from the fact that many passengers are afraid to travel by train to Pisgat Ze'ev through Shuafat, so they alight before then and travel to the neighborhood in buses that don't pass through the Arab neighborhoods."

The events surrounding the capital's light-rail system have incurred the wrath of Jerusalem Mayor Nir Barkat, who has accused the franchisee, City Pass, of inflating the damage done to the train in an effort to secure financial benefits. Avraham Shochat, a former finance minister and now chairman of City Pass, responded in an angry letter of his own: "This is totally unfounded claim that should never have been made," he wrote to Barkat.

Barkat also sent a letter to the prime minister in which he launched a fierce attack on the public security minister, charging that the latter is not providing the police with the necessary means to quell the unrest. At Barkat's request, the prime minister convened a discussion with all parties and instructed them to address the issue thoroughly.

The police have appointed a special task force to deal with the attacks on the train; and over the past month, officers have been carrying out both overt and covert daily operations in an effort to combat the violence.

On one of our journeys, a policeman in one of the cars spotted an Arab youth who was picking up a bottle to throw at the train. The officer got off the train, ran toward the suspect and apprehended him before he could throw the bottle. The youth turned out to be a 14-year-old Shuafat resident – the typical profile of the stone-throwers.