The three-month-old was killed and six others were hurt on Wednesday afternoon when a car was driven at top speed into pedestrians near the Ammunition Hill light rail stop on the seamline between west and east Jerusalem.

The driver, 21-year-old Abed Abdelrahman Shaludeh, a Palestinian from Silwan in East Jerusalem, was shot as he was trying to flee the scene and succumbed to his wounds early Thursday.

"You were pure. I want you to look down at me and smile," crying, Haya's father, Shmuel Elimelech said. "Tomorrow is your three-months birthday. It's all now in God's hands. We will remember you." 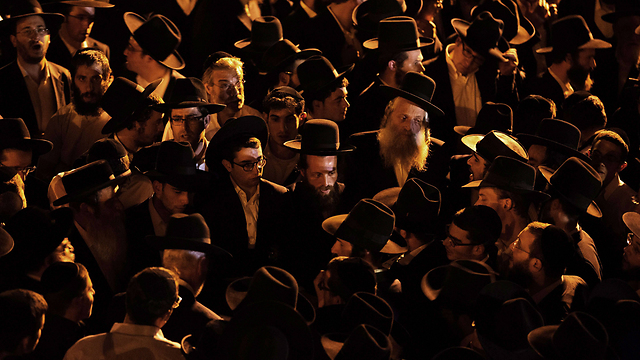 President Reuveln Rivlin, who also attended the funeral, said, "the entire nation of Israel stands with us in these moments, lamenting the tragic loss, the murder and hatred that harmed the innocent soul of a baby, pure and loved. We don't know God's plans, but we do know of the increasing incitement on the Arab streets and the streets of Jerusalem, which unfortunately receives the backing of leaders in the Arab world, has the ability to destroy the delicate balance of life in Jerusalem, and carry us all into a maelstrom of destruction and pain."

Also at the funeral were Jerusalem Mayor Nir Barkat, and the Jerusalem Chief Rabbi Shlomo Amar.

The family has asked that the media refrained from covering the funeral. The United States condemned what it called a "terrorist" attack.

"We express our deepest condolences to the family of the baby, reportedly an American citizen, who was killed in this despicable attack," State Department spokeswoman Jen Psaki said in a statement.

Jerusalem Mayor Nir Barkat said the baby and her parents, who were injured in the attack, were US citizens.

"We urge all sides to maintain calm and avoid escalating tensions in the wake of this incident," Psaki added.

The Israeli government informed the US that Hamas was believed responsible for the attack, a US official said.

It wasn't clear, however, if the attack was the work of a lone wolf, the official added. There was no immediate information of any orders to carry out the attack delivered by high-level members of Hamas, the official said.

On Thursday morning, Defense Minister Moshe Ya'alon charged that in the Palestinian Authority "there is not, and never was, a culture of peace, but a culture of incitement and jihad against Jews."

He went on to say that "it starts with Abbas' fraudulent statements against Israel at the UN, continues with repeated Palestinian attempts to de-legitimize us in the international community and ends with incitement in the Palestinian education system."

Foreign Minister Avigdor Lieberman also commented on the Jerusalem attack, as well as the three shootings in Canada on Wednesday.

"The terror attacks that took place yesterday, at almost the same time in both ends of the world, show that terrorism is a global epidemic that must be fought against with force and without compromises," he wrote on his Facebook page.

Four of the people wounded in the attack were still in hospital on Thursday morning.

Two others who were wounded in the attack were released overnight from the Hadassah Medical Center on Mount Scopus.

Since the attack, there were two stone-throwing incidents in the Jerusalem Light Rail overnight Wednesday and early Thursday. Damage was caused to the Light Rail in the Shuafat area, but no one was hurt.