While it is marketed for Muslims keeping halal, new device can also help kosher-keeping Jews. It will cost €6.90 per unit and is said to be 99% accurate. test cannot, however, detect whether animal was slaughtered according to Halacha.

ASNIERES - Two French entrepreneurs have launched a portable device to test for the presence of pork in food for use by Jews who abide by kosher laws or Muslims who abide by dietary laws.

The test, similar in size to a pregnancy test, aims to help consumers detect traces of pork not just in food, but also in cosmetics or medicines.

The kit comes with a small test tube in which a food sample is mixed with warm water. A test strip is then inserted into the water which delivers its verdict after a few minutes: one line means no trace of pork; two lines means pork is present. 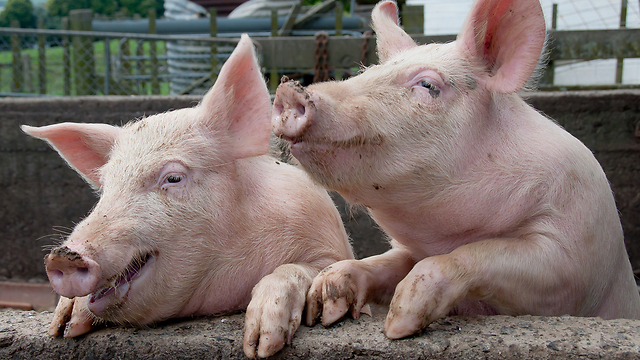 Frenchmen Jean-Francois Julien and Algerian-born Abderrahmane Chaoui came up with the idea at university two years ago in the midst of a Europe-wide scandal over mislabelled frozen meals containing horsemeat instead of beef.

"Abderrahmane tells me 'you know, food allergies and food intolerance are very interesting of course but you should really diversify yourself in animal proteins'," Julien said. "That's when we got the idea to develop a specific anti-body for porcine DNA."

Their company, Capital Biotech, argues no other existing test allows the end user to analyze the content of a food product as easily and cheaply as theirs. The tests cost €6.90 per unit and are 99% accurate. Called "HalalTest," it will be mainly marketed to the large Muslim population in France, but can also meet the needs of kosher-keeping Jews. The new device will be available for purchase online very soon, the founders said.

Despite its name, Capital Biotech says no test can tell whether a meat dish is fully kosher or fully halal. As well as shunning pork, both Judaism and Islam dictate that animals be slaughtered according to a strict method.

Even so, Capital Biotech said it had received pre-orders for 10,000 testing kits within 24 hours of the launch on Wednesday.

Julien and Abderrahmane, who have also launched an alcohol test, have developed several other tests which could, they believe, interest millions of food intolerance sufferers.

The first will detect cow's milk proteins, while another will detect traces of gluten in food for people who have an intolerance to gluten or those who have developed celiac disease, said Capital Biotech co-founder Thomas Nenninger.