Farmers use loopholes and clever workarounds to keep cultivating during Jewish 'Shmita' year, like selling their lands to the non-Jewish George Shtraykhman.

Israeli farmers must give their lands a rest for a year, every seven years, according to the bible.

So how do modern-day growers reconcile the ancient spiritual practice with a need to feed the country's 8 million citizens?

Most market their produce thanks to a clever workaround - they temporarily sell their farms, valued together at $33 billion, to a 25-year-old non-Jewish telemarketer named George.

"I own all those lands, and I don't even own an apartment," joked George Shtraykhman, an immigrant from St. Petersburg, Russia.

The seventh-year sabbatical, called "shmita" in Hebrew, began last month on the Jewish New Year, and extends through the fall of 2015. Though only a minority of the Israeli population abides by strict Jewish religious law, nearly all Israeli Jewish farmers choose to follow the biblical directive, in part so they don't lose their Orthodox customers' business.

Rabbi Yaakov Ariel, who helped write the government's detailed how-to pamphlets for farmers and gardeners, said the practice serves as a spiritual reminder.

"We are not owners of the land. There is a master of the universe," Ariel said.

Out of some 6,700 Jewish farmers in Israel, only about 50 ignored the religious rules, while only about 450 abandoned their farms altogether this year, said Efraim Antman of Israel's Religious Services Ministry.

Most of the rest opted for George Shtraykhman.

They sold their farms to the government, and last month, over cookies and orange juice, the government sold the lands to Shtraykhman, turning the non-Jewish telemarketer into one of Israel's biggest private landowners.

Technically, the yearlong sale is legally binding. In practice, it is symbolic. He didn't even take home a copy of the contract.

Shtraykhman, who has Jewish roots, said he spent time in a religious seminary when he moved to Israel and considered formally converting to Judaism.

"In the end, I decided it wasn't for me because I like cheeseburgers," he said, referring to Jewish dietary rules banning the mixture of dairy and meat, "and because not everyone needs to be Jewish. I can be a good person and that's it."

He maintained good ties with a rabbi from the seminary who introduced him to Israel's chief rabbinate for the sale. He said he "paid" 2,000 shekels, or about $540, for the land, with money gifted to him by an official involved in the ceremony.

Some farmers employ another clever solution to avoid tilling the soil: they use hydroponics, growing produce not in soil but in nutrient-enhanced water.

Gilad Fine, 40, a skullcap-wearing farmer in the small desert community of Bnei Netzarim, grows organic romaine lettuce and kale in thin white troughs connected to an automated grid that circulates the enhanced water to feed the plants the nutrients they need. 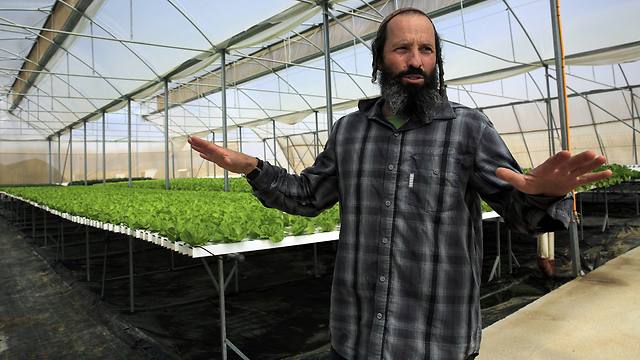 Farmer Gilad Fine at his greenhouse (Photo: AP)
His greenhouse follows specific guidelines that certify the produce kosher for the sabbatical year: the troughs are raised high and the ground is covered in dark tarp.

"There's no relationship between the land and the root," Fine said. "So we are keeping the shmita in a certain way, by not using the land."

The most devout Jews do not accept these loopholes, preferring to import produce from abroad or from Palestinian farmers.

What eases the concerns of Fine's most pious Jewish consumers is the fact that, despite the lengths he has gone to satisfy the biblical requirements, perhaps the biblical rules don't fully apply to him.

His greenhouse is in a tumbleweed-swept corner of the country between the southern tip of the Gaza Strip and the Egyptian border.

According to religious tradition, it's an area that was not under Jewish control 2,000 years ago during the time of the second Jewish Temple in Jerusalem -- partially exempting it from the biblical law.