Yair Lapid in the Ynet studio

Lapid: US sees settlement construction as provocation, we have to stop

Finance Minister talks to Ynetnews about Israel's relationship with the US, options for olim, and his reasons for staying in the government.

"Right now what we need to do is hold back any new construciton within the teritories, because the United States sees it as an obstacle to any future peace process, and in a way as a provocative move by the State of Israel and the government of Israel."

"Whether we agree with this or not, we have to understand we cannot act this way to our most important ally," Lapid said. "Only when you become a member of the security cabinet.... (do) you understand how deep are the ties and how important are the ties."

His comments came as officials confirmed that Prime Minister Benjamin Netanyahu is planning to advance the construction of more than 1,000 new homes in neighborhoods of Jerusalem over the Green Line.

Speaking in Hebrew, Lapid told Ynet that “construction should not move forward while there is a crisis with the US and the rest of the world that should not be exacerbated.”

The finance minister said that while he did not oppose construction in established settlements, the preservation of the relationship with the United States was paramount.

“I’m not against building within the settlement blocs. I’m against building outside of the settlement blocs. You do not know how critical US relations are for the safety of our government until you have sat in the Security Cabinet," he said. "In my opinion it creates a breakdown and degrades Israel’s status with the Americans and the rest of the world.” 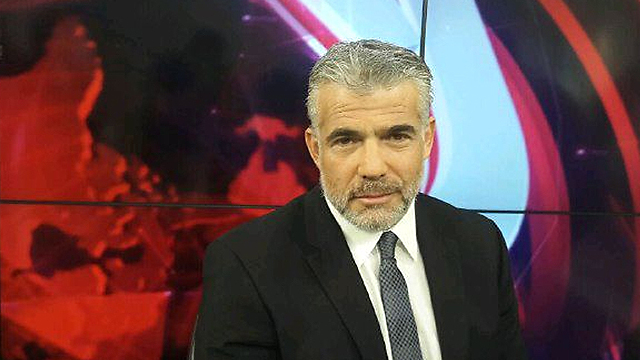 Yair Lapid in the Ynet studio

Lapid also said that he and Justice Minister Tzipi Livni would be pressing for a resumption of negotiations with the Palestinians, who were blamed for the failure of the last round of talks earlier this year.

“I can certainly see Netanyahu returning to the negotiating table," Lapid said. "Let’s remember that the person that blew up the negotiations and is speaking of martyrs at the Temple Mount is Abu Mazen (Abbas).”

Lapid also expressed his support for the conversion bill that would allow for a greater range of rabbis deciding whether someone has properly converted to Judaism. At present, the Chief Rabbinate is the only body allowed to determine whether a person has converted.

“It is a good and right law and Yesh Atid will support it in every way possible," he said. "It cannot be that only Lithuanian Jews can decide who is considered a Jew. There are Israelis who fought during Operation Protective Edge whose Jewish identity should not be determined by a narrow disagreement in the Jewish world.”

The finance minister also took pains to point out his successes in managing the country's money.

“I know the public has a short memory, but the previous government collapsed because they were not willing to pass a budget that had a hole of close to NIS 40 billion. I lost a year because I dealt with this hole. Now we can finally do what were voted into office to accomplish. On November 1, electricity prices will be reduced, and water prices have gone down by 10%.

"This month, for the first time since 2007, housing prices have gone down. These are the results of the things we are doing. With this momentum we will pass the 0% VAT Bill and other target programs. Wait half a year, because while you wait the prices will continue to go down.”