At Balad press conference, Israeli flags are moved to corner of room amid claims of incitement against Arab MKs.

A defiant MK Hanin Zoabi lashed out Monday at the decision to suspend her from the Knesset, saying that while Israel was only interested in passive minority representation, she and her Balad party "won’t be good Arabs."

Zoabi was suspended by the Knesset Ethics Committee for six months, the maximum punishment according to Knesset regulations, following complaints of offensive language. The suspension takes effect on Thursday.

“When you distance me from the Knesset you are basically saying you do not want Arabs, and only want good Arabs to represent,” she said at a Balad press conference as the Knesset began its winter session. Beforehand, the party's spokesman had moved an Israeli flag to the corner of the room from a formerly prominent position.

“We won’t be good Arabs," Zoabi continued. "In civilized countries, parliament mem5bers stand behind their vision against racism, crime and oppression, and democracy and equality for all is considered exemplary. The fact that we need to hold a news conference shows the downfall of this democracy. The most basic rules of the game have been crushed by Knesset members and the political elite, even the left is silently watching from the side.”

The Balad lawmakers claimed there is incitement against Arab MKs in the Knesset, and accused the political system of acting to block the functioning of the Arab parties by raising the threshold for parties to win seats in the Knesset. 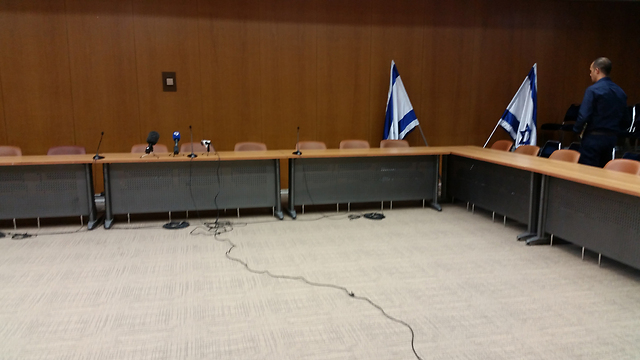 Israeli flags in the corner of the room at the Balad press conference on Monday. (Photo: Eli Mandelbaum)

The party’s spokesmen, Sami Ali, who organized the conference room where the press conference was held, explained he had moved the Israeli flags because the MKs had originally intended to sit in one spot in the room but at the last minute decided to switch their seating arrangement.

“We moved the flags to coincide with the changed seating arrangement of the MKs, but in the end they sat at a different spot and the flags stayed where they were. At least we left the flags in the room,” he said. 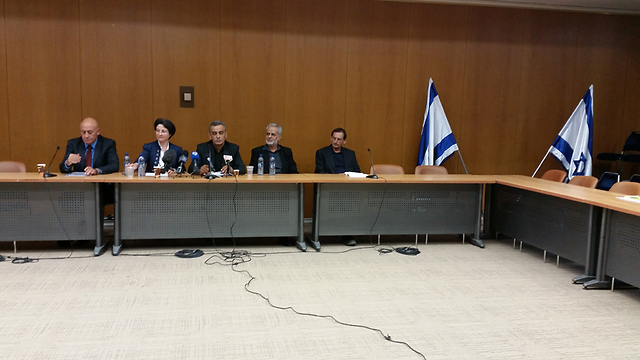 MK Zoabi discusses her suspension from the Knesset during a Balad press conference on Monday. (Photo: Eli Mandelbaum)

Zoabi told the reporters present that she is wrongfully discriminated against: “I’m more democratic than all of the members of the Ethics Committee that are trying to explain to me what is good and what is bad and how an Arab MK should behave. All of my remarks fall in the realms of democracy and do not slander anyone. There is hate speech and incitement against me.”

MK Dov Khenin (Hadash) said of his colleague: “She was elected to the Knesset to present these views and it is her right to present her position. The question is whether political positions and conversations can be ethical violations. When an MK says the Peace Now organization is ‘a group of traitors’ it is not an ethical violation. When an MK says asylum seekers are a cancer this is not an ethical violation. The only difference regarding this MK is that her views are not accepted by the majority, and for this reason she is being punished.”

Khenin said the fight is not just for the protection of Zoabi’s rights but a fight to “allow the Knesset to be a democratic institution.”

Since the abduction and murder of the three teenagers from Gush Etzion, Zoabi has stood at the center of a number of controversial incidents that ultimately led to several political threats.

Among these events was an incident in which Zoabi yelled derogatory jeers at police officers after they offered testimony against Palestinian rioters at the Nazareth Magistrate's Court. According to the claim, Zoabi’s actions fell in the realm of offending a public servant and inciting violence.

Eli Mandelbaum contributed to this report.