'Life is so precious that it's unthinkable to give it up'
Photo: Herzog Hospital Spokesman

The children of the Chronic Respiratory Care Ward at Herzog Hospital have severe brain damage, but for the dedicated staff it is a priority to give them quality of life.

* The names of the children in this article have been changed

When Eli arrives to visit his 14-year-old daughter Rachel at the Children's Chronic Respiratory Care Department in Herzog Hospital in Jerusalem, he fights to hold back the tears. Instead of crying, he tries to be positive, telling her about the upcoming holiday, sharing all the recent news from their large family, and praying with her.

Sometimes, as he prepares to say goodbye to his beloved child, he thinks she is moving her head as though trying to reach for him. But, painfully, he understands that she can't.

The department opened in 2004, based on the successful treatment of adults requiring respiratory support. There are at present 24 children in the ward - some are conscious and others have minimal response to stimulus.

Department director, Prof. Rena Gale, says all the children in the ward are considered chronically ventilated and suffer from brain damage as a result of some congenital defect, a genetic disorder or a traumatic event that caused serious injury, such as a fall, near-drowning, car accident or terror attack. 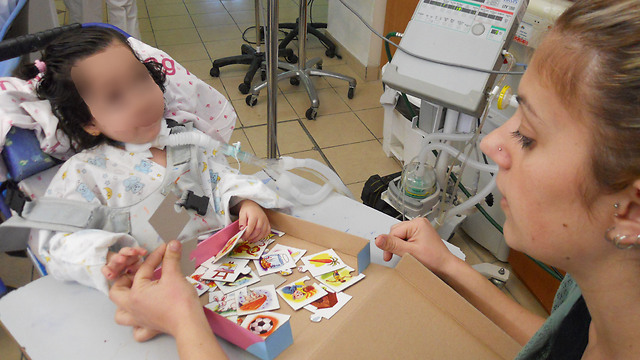 It is about improving quality of life (Photo: Herzog Hospital Spokesman)
"Almost half of our children had periods of hypoxia due to various disastrous incidents, such as a baby who suffocated on the lace of a pacifier or a toddler who pushed his head inside a pickle jar full of water," Gale says. "The second group contains children with congenital problems such as a developmental defect leading to brain dysfunction, a hereditary disease or malfunction created by some genetic defect during fertilization, or complications following meningitis, which unfortunately still occur. The common denominator is their constant dependence on a ventilator," she says.   "However, our work doesn't end with prolonging their lives; it is also about improving their quality of life. Our children receive physical therapy, occupational therapy, speech therapy, therapy with animals, music therapy, bibliotherapy and more. The adherence to daily stimulation has certainly proven itself; there are conclusive physiological responses, for example their muscles, which under normal circumstances are very rigid, become looser, and the heart rate and blood pressure decrease.

"Furthermore we have noticed that the children look at us and recognize us, despite the fact that they can't communicate verbally. Obviously they feel more than they understand."

The department at Herzog is one of only two nationwide designed to treat children with such conditions (the other is at Reuth Medical Center in Tel Aviv). And it's not easy walking in these halls.

The colorful murals painted by head nurse Shani Miara, the balloons, the cheerful music playing in the different rooms all stand in stark contrast to the faces of the children lying in their beds or sitting in their chairs. At first glance they seem so helpless, remote and in pain that crying is an inevitable response. But when you sit next to one of the children, who is wrapped safely in the arms of one of their special education teachers, the picture changes. 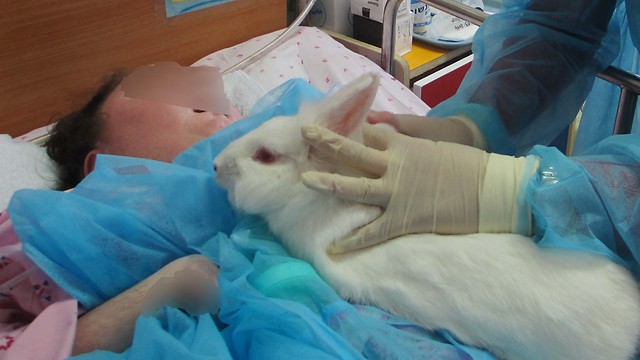 Hugging hour with the animals (Photo: Herzog Hospital Spokesman)
Four-year-old Haim gets a daily "hugging hour". An hour where one of the nurses or teachers hugs and kisses him, talks to him and brings Avatar the rabbit or Mowgli the dog to keep him company. She is astounded by the child's slightest movement. Though his head is thrown back and his eyes closed, he is encouraged to pet the rabbit. The little, distorted fingers move, and it seems that something in Haim's facial expression softens and calms. "His mother had a difficult time holding him. She avoided it because she was afraid she might hurt him," says Miara. "On one of the visits I suggested that she try to pick him up and told her that we do it on a daily basis. She was so happy and excited because she realized it was possible. Since then she picks him up and hold him in her arms every time she visits." In another room, nurse Levana is dancing and singing to 13-year-old Yaniv, who recently celebrated his bar mitzvah at the hospital. Afterwards she brings closer the Snoezelen ball, a multi-sensory light ball that makes him smile – and when he does the whole staff laughs with him. The staff talks proudly about 3-year-old Taufik, who intially was unable to move at all, but by some miracle they managed to get him to kneel up and move his hands. Special iPad programs designed for his needs allow him to "play" music on virtual instruments. And Taufik has a clear preference for percussion. School coordinator Amal Hamati Massalha says that the staff know which type of music each of the kids prefers, be it Hasidic, classical or even Mizrahi, and plays it accordingly. They of course match stimulation sessions to each child's condition. Some of the children enjoy petting animals, some learn to hold chimes, while others play with the Snoezelen ball. And they all participate one way or another in the Friday cooking classes.

"Often," says Prof. Gale, "when people hear about this ward, they immediately think 'What kind of life is this?' But studies show that children with severe disabilities are content with their lives; it all comes down to how you look at it. In our culture, and especially for me as a Holocaust survivor, life is so precious that it's unthinkable to give it up.

"There are hospitals around the world where when the doctor breaks it to the parents that there is nothing he or she can do to improve their child's condition, the parents take one last photograph with their child, they say their goodbyes and ask for the child to be disconnected from life support. "In Israel, apart of the fact that it is forbidden by law, it just never happens. Throughout the years we have had cases where we have succeeded in weaning children off the ventilator, and these are our greatest success stories." 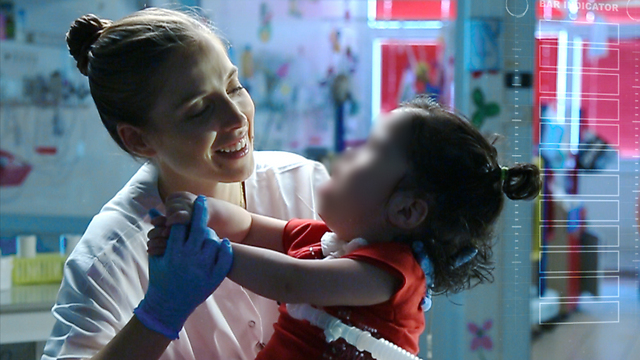 Fighting on two fronts (Photo: Herzog Hospital Spokesman)
Yet despite the tremendous efforts made by the doctors, nurses and teachers – about half of the children on ventilation survive for five years - others have a shorter life. In general, girls have a higher survival rate than boys. "Despite all the measures taken, unfortunately there are cases where our children die – always as a result of infection. The staff, like the parents, do everything in their power for the chronically ventilated children. Every story here is a tragedy and we have more than our fair share," Gale says.

"We are constantly monitoring the degree of the children's pain and prevent them from suffering; we change their position every hour so that they don't suffer from pressure sores, we know every child and their preferred position. We put our best energy into giving each of these children something; a look, a smile, a movement – we are fighting on two fronts – for the child's life, and for the quality of that life."

For Eli's daughter Rachel, her health changed at the age of three as the result of a freak incident.

"Our Rachel was completely healthy," says her father. "Than one night she vomited in her sleep and choked on some of the vomit. It probably happened within seconds, which is probably why we didn't hear her cry before the brain damage was caused. Our shock was as great as our pain.

"During the first year we cried our eyes out, and I could easily sit next to her and burst into tears, but for her own good I keep myself togeteher. I no longer ask myself 'what if'. We are Haredi Jews; we believe everything is in God's hands and that he is doing only good things for us – some we understand and some we don't. It makes it easier for us. "We wait for Rachel to come home and although the doctors keep telling us there is no chance of that, we don't lose hope. Miracles happen; we've noticed that everytime we recite the Shema prayer (where it is customary to cover one's eyes) she tries to move her hands towards her eyes and it's very exciting. "Her life here does not resemble our life at home, but in this department the staff tries to give these children the best life possible within their limitations." Ironically, the hospitalization need in the Children Chronic Respiratory Care department is increasing gradually as the medical technology advances and allows doctors to save accidents and diseases victims that could not be saved in the past.

In a few months, the department in Herzog Hospital, which takes in children from all over Israel, is supposed to double its size as part of its relocation to a new wing in the hospital.

There, Prof. Gale hopes, it will be possible to assist more children whom the professional literature tends to ignore, and do everything to provide them with a comfortable life.